Despite the fact that I’ve watched every other Jack Ryan film numerous times over the years (yep, even the critically-panned, Affleckalicious ‘The Sum of All Fears’) and tackled a half dozen Tom Clancy novels which have yet to make it to the big screen, I’ve only caught director Phillip Noyce’s ‘Patriot Games’ one time… and that was sixteen years ago. This realization surprised me since ‘The Hunt for Red October’ -- aside from being one of my favorite flicks of all time -- was always one of my go-to movies throughout high school and college. You would think I would have at least sampled Harrison Ford’s Jack Ryan debut more than once. Needless to say, I was able to approach this viewing with few expectations and evaluate the film without any preconceived ideas.

Adapted from Clancy’s 1987 novel of the same name, ‘Patriot Games’ follows newly-retired CIA agent Jack Ryan (Harrison Ford) on a vacation to London with his wife (Anne Archer) and daughter (a young Thora Birch). To his dismay, sight-seeing and shopping is yanked from the itinerary when an Irish terrorist named Sean Miller (a scene-chewing Sean Bean) attempts to kill British Secretary of State, Lord William Holmes (James Fox). Ryan interrupts the assassination plot and saves Holmes, incapacitating Miller and killing his younger brother in the process. After being sent to prison, Miller escapes and sets his sights on revenge, forcing Ryan to protect his family from a squad of blood-thirsty terrorists. At the same time, Ryan must face Miller, contemplate his future in the CIA, and prevent another international incident.

At its heart, ‘Patriot Games’ is about the collision of two opposing forces -- a family man working to defend the innocent, and a misguided loyalist fighting for his increasingly vague ideals. When Bean and Ford are circling each other, the story seems to crackle towards its inevitable, climactic showdown, giving the actors plenty of room to control the tone of the entire film. To the slight disappointment of Clancy fans everywhere, political intrigue takes a back seat to the central conflict and offers viewers a more accessible plot than the novel or the other Ryan-centric films in the series. Personally, I think it works. While ‘Clear and Present Danger’s globe-trotting game of cat and mouse is, at times, unnecessarily convoluted and ‘Sum of All Fears’ boasts the subtlety of a Ferrari blasting down a dirt road, ‘Patriot Games’ simply focuses on Ryan’s struggle to keep his family safe and Bean’s insatiable need to propel his blood-feud no matter the cost.

Sadly, the biggest problem I have with the film may also be the same element that sets ‘Patriot Games’ (as well as ‘Clear and Present Danger’) apart from other political thrillers. Ford’s Jack Ryan is such a reluctant, average-joe hero that he doesn’t seem like a CIA man at all. While I appreciate the realistic take on the character and the believability Ford brings to the role, there isn’t enough of a developed arc to make it matter. Ryan comes across as an unwilling participant -- an unenthusiastic champion if you will -- who doesn’t have the spunk and fire Alec Baldwin brought to the part in ‘The Hunt for Red October.’ Perhaps the culprit is the film’s underdeveloped script or Noyce’s simplistic intent, but the Jack Ryan that appears in ‘Patriot Games’ is far too reactionary to benefit from the drive and intelligence that make Clancy’s iconic everyman so engaging.

Ultimately, ’Patriot Games’ struck me as a solid thriller with quite a few compelling performances. Sure, I would have liked to see Noyce’s interpretation of Ryan fleshed out and for the script explore everything that’s going on inside its characters’ heads, but I must say I enjoyed its authentic examination of honor, rage, and revenge. While it’s not a show-stopping powerhouse like ‘The Hunt for Red October’ or as intense and detailed as Clancy’s novels, it still offers genre junkies a few things to get excited about. 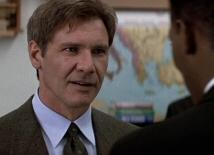 Unfortunately, ‘Patriot Games’ features the most problematic 1080p/AVC-encoded transfer of the four Jack Ryan BD releases. Sixteen years have passed since the film's theatrical debut and the print is showing its age. Contrast wavers and weakens at times, specks and scratches pop up throughout the presentation, clarity becomes muddled in some shots, and several nighttime scenes look dull and flat. Adding insult to injury, edge enhancement has been retained, an annoying criss-crossed pattern briefly materializes over the image on more than one occasion (the discrepancy hovers over the Paramount logo when the movie begins and reappears at least a dozen times during the film as well), and a few textures are disrupted by yet another bizarre glitch (to catch this phenomenon, pay attention to the ski-masks when Miller first realizes his brother is dead).

A few shots have also been marred by the two extremes of over-processing -- quite a few close-ups suffer from unnatural artificial sharpening, while others appear to have been scrubbed at the expense of fine detailing and sharp textures (pay close attention to the scene involving Ryan's attempts to stay conscious after preventing Holmes' assassination for examples of both). The intermittent use of light DNR and artificial image enhancement certainly doesn’t ruin the entire presentation, but there are plenty of superior catalog transfers on the market that make ‘Patriot Games’ look inconsistent and hazy by comparison. Ironically, spiking grain and shots with average textures wouldn’t have bothered me nearly as much as the unattractive processing that's been applied to the picture.

Still, even the worst visuals in ‘Patriot Games’ look great next to the Collector’s Edition DVD. Despite an intentionally drab palette that bounces between steely blues and muddy browns, primaries are more vibrant, blacks are deeper and more consistent, and detail has received a welcome (albeit inherent) boost from the disc’s increased resolution. Better still, the general artifacting, crushing, and delineation discrepancies that bottle-neck the SD version have been eliminated. Over-polished as it may be, the image is clean and relatively reliable. Could ‘Patriot Games’ look better? With a dedicated, invasive remastering, I believe anything’s possible. However, let’s be honest: this average thriller isn’t likely to earn the tender loving care bestowed on other beloved classics. As it stands, this is the best ‘Patriot Games’ is probably going to look for a long time. 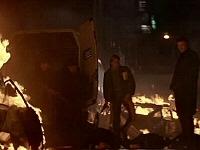 The Dolby TrueHD 5.1 surround track created for this release may offer fans more substantial value than its video transfer, but it still struggles with its aging source. First the good. Dialogue is clean, well-prioritized, and healthily anchored to the center speaker -- even though most of the lines in ‘Patriot Games’ are delivered in one of three flavors (whisper-quiet, alarmed, or menacing), the actors’ voices never have to compete with sound effects, action sequences, or James Horner’s score. LFE-support is respectable whenever it’s called upon, adding oomph to an exploding car and a healthy roar to a boat engine. Otherwise, the experience is a conversational affair that fails to take advantage of the rear speakers or develop a deep, immersive soundfield like recent films with more refined sound design. The aforementioned score is the best sounding component the track has to offer, but even it sounds like a segregated element of the mix, slightly disjointed from the bulk of the soundscape.

Paramount’s new lossless audio package leaves the DVD’s standard mix sounding murky, overly compressed, and positively outdated. ‘Patriot Games’ may not be able to match sonic wits with the most bombastic catalog releases on the shelf, but it handles its material well enough to satisfy fans working to upgrade their old collection. 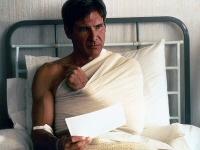 Like the 2003 Special Collector’s Edition DVD before it, the Blu-ray edition of ‘Patriot Games’ doesn’t feature an extensive supplemental package. The only things included on the disc are a straight-forward EPK loaded with cast and crew interviews (SD, 24 minutes) and the film’s theatrical trailer (HD, 2 minutes). The featurette itself is pretty informative and includes chats with everyone of note that was involved in the production. It pays too much attention to one of the film's producers, but it still gives fans a decent behind-the-scenes tour of the film. 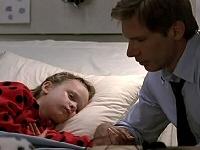 While ‘Patriot Games’ may not be the best Jack Ryan film of the bunch (or a very memorable thriller in its own regard), Harrison Ford and Sean Bean add enough gravitas to the mix to propel the straight-forward story along at a nice pace. Likewise, the film’s high-def debut isn’t as impressive as the other Jack Ryan releases dropping on Blu-ray this week, but it still manages to offer fans a decent upgrade. The disc features an improved but problematic video transfer, a solid but underwhelming TrueHD audio track, and a welcome but anemic supplemental package. Series completists and Clancy fans will pick this one up regardless… everyone else should give it a rent and proceed with caution.

Sale Price 8.48
Buy Now
3rd Party 3.99
In Stock.
See what people are saying about this story or others
See Comments in Forum
Previous Next
Pre-Orders
Tomorrow's latest releases