The Hunt for Red October

’The Hunt for Red October’ may be a beloved classic today, but when it hit theaters in March of 1990, quite a few notable critics were… let’s just say less than kind. The Washington Post skewered the film for being “big, clunky, and ponderously overplotted,” Newsweek labeled it a disappointment, and the Washington Times called its underwater intrigue “murky and impossible to follow.” Audiences, on the other hand, weren’t so quick to dismiss the remarkably written and meticulously paced Cold War thriller. The film went on to make $200 million during its worldwide theatrical release, develop a loyal following on home video, and endure the decades to become a true, timeless classic.

Based on Tom Clancy’s best-selling novel of the same name, ‘The Hunt for Red October’ follows CIA analyst Jack Ryan (a young Alec Baldwin) as he attempts to convince his superiors that a rogue Soviet submarine sneaking through international waters is not plotting an attack on the United States. He believes the ship’s captain, Marko Ramius (Sean Connery), and Executive Officer, Vasily Borodin (Sam Neill), are planning to defect and surrender their advanced vessel to US military personnel. Weaseling his way on board the USS Dallas -- a submarine whose SONAR operator (Courtney B. Vance) has discovered how to track Ramius’ vessel -- Ryan convinces a reluctant American captain (Scott Glenn) to let him make contact with Ramius and offer his government’s full support.

There’s an early scene in ‘The Hunt for Red October’ where we see Ramius and his Russian crew going about their duties and speaking in their native tongue. After the camera pushes in on a man reading a Bible, a language transition occurs and the crew simply begins to speak in English for the rest of the film. With this single, confident changeover, director John McTiernan (‘Die Hard,’ ‘The Thomas Crown Affair’) eliminates the difficulties an audience may have with a Scot playing a Soviet sailor, makes it clear the crew is actually speaking Russian, and allows the various European and American actors to dig into their roles without risking the integrity of their delivery. In fact, this effortless narrative trick is the first of many that demonstrate the subtlety and sure-handedness McTiernan brings to the entire production. He creates conflict and doubt with silent stares and nervous glances, he reveals intense emotional turmoil with the smallest sampling of dialogue, and gives each of his supporting cast members at least one moment to shine.

More importantly, McTiernan doesn’t lose his audience in the complicated political minefields Clancy takes the time to explore in his novels -- instead, the director shapes a layered story about two strangers who breach cultural barriers to accomplish something great. He spends the majority of his time developing the characters, trusting that the plot will fall into place as a result. To his credit, it works. The Americans and the Russians aren’t portrayed as good or evil, but rather political forces comprised of a variety of beliefs and ideals. The intrigue McTiernan pulls from Larry Ferguson and Donald Stewart’s screenplay focuses on the human struggles aboard the Dallas and the Red October… not the race to acquire a new technology or an underwater battle between two superpowers. Best of all, Ramius and Ryan aren’t portrayed as two sides of the same coin, but as separate intellectual strategists who both understand exactly what is at stake.

Of course, all of it would be for nothing if it weren’t for a collection of fine performances from everyone involved. Connery redefines "stoic," revealing restrained bits of brashness, playfulness, and intelligence in his well-rounded defector. Baldwin combines wit and determination, naturally crafting Ryan into a clever and engaging thinking-man’s hero. Neill becomes the tragic center of the tale, portraying a loyalist who considers Ramius a superior, a colleague, and a friend. It doesn’t end there either. Vance, Glenn, James Earl Jones, Stellan Skarsgard, Tim Curry, and plenty of other notable faces pop up and make the best of their all-too-brief scenes. To its testament, any one of ‘The Hunt for Red October’s eclectic characters could be the focus of an excellent film.

I sometimes worry that nostalgia brightens my assessment of films I fell in love with when I was younger, but ’The Hunt for Red October’ is as absorbing today as it was eighteen years ago. A sharp script, effortless direction, and an endless collection of fantastic performances make this entry in the Jack Ryan series a top notch thriller. As it stands, all of the filmmakers currently working on rebooting Clancy’s biggest franchise should train their eyes on the first and the best. 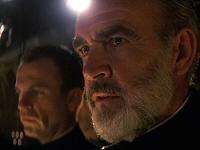 Ever since a packaging snafu led to Paramount's controversial cancellation of the 'Jack Ryan Collection' HD DVD in 2007, fans have been anxiously waiting for 'The Hunt for Red October' to be released in high definition. Well, rest easy, dear readers... the series opener is finally making its high-def debut with a faithful 1080p/AVC-encoded transfer that will please fans and purists alike. While the eighteen year old film is starting to show its age (the print is occasionally tainted by relatively negligible specks, scratches, and blemishes), Paramount has stabilized the picture and created an eye-pleasing three-dimensional image that makes the disc’s arrival seem worth the wait.

The picture boasts strong colors, bold primaries (particularly during the various submarine encounters), solid blacks, and comfortable contrast leveling. In spite of the various palette-taxing lighting schemes employed throughout the film, skintones remain natural and detail rarely slips. Fine textures are quite impressive, facial pores and stubble are crisp, and the Dallas and Red October command centers benefit exponentially from such increased clarity. Only a handful of shots seem softer than the rest, creating a consistent and reliable picture from beginning to end. Best of all, I didn’t catch any significant artifacting, problematic noise, or heavy DNR (if any). Edge enhancement makes a few noticeable appearances -- particularly when either sub surfaces -- but it isn't detrimental and will only bother those with larger projection screens.

To top it all off, a quick comparison to the standard definition release reveals a monumental improvement in almost every area -- the BD’s occasionally ruthless delineation is the only aspect of this new release that doesn’t utterly trounce the DVD. While grain-haters will probably disagree, the end result is sharp, clean, and precise, offering what I assume is a faithful approximation of the film’s theatrical presentation. It may not be perfect, but ‘The Hunt for Red October’s video transfer will give fans a disc to get excited about. 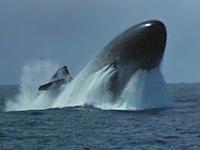 ’The Hunt for Red October’ sounds as good as it looks. Paramount has produced a Dolby TrueHD 5.1 surround track that outperforms the DVD’s standard audio mix, crafts an immersive soundfield, and allows fans to hear the film the way it was meant to be heard. Directionality is surprisingly proficient, underwater and interior pans are silky smooth, and dialogue is crisp and well prioritized (minus a half-dozen whispers that slip through the cracks). The rear speakers don’t make a direct assault on the listener per se, but do a fine job supporting every scene with subtle, acoustic aggression that allows ambient effects, explosive impacts, and quiet exchanges to register as convincing and realistic. The track’s proficient dynamics also make a memorable impression. Basil Poledouris’ extraordinary music is reborn in this lossless mix with powerful bass tones, a healthy chorus of unwavering voices, and plenty of steady, high-end instrumentation.

My lone complaint is that the LFE channel doesn’t dig as deep as I’d prefer during the submarine engagements -- sure, a decent spread of low-end pulses have been competently replicated throughout the film, but I longed for the sort of disquieting gut-punches delivered by the best lossless tracks on the market. Still, such a nitpick is hardly a point of serious contention. ‘The Hunt for Red October’ sounds as good as I hoped and left me with little choice but to shove my standard DVD down the garbage disposal. 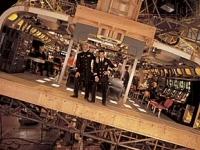 ‘The Hunt for Red October’ includes all of the supplements that appeared on the Special Collector’s Edition DVD in 2003. Unfortunately, the content is a bit slim (especially considering the size of the film’s fanbase) and the lone featurette is presented in standard definition. 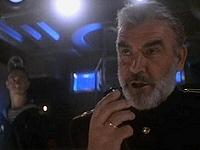 ’The Hunt for Red October’ isn’t just one of my personal favorites, it’s widely considered one of the best submarine flicks of all time. McTiernan has created a classic that boasts a tight script, a great story, and a horde of outstanding performances. Thankfully, its highly anticipated Blu-ray debut features a faithful, eye-pleasing video transfer and an immersive, engaging TrueHD audio track. Sure, the disc is a bit light on supplemental material, but it still offers fans the quality they've been waiting for. Personally, this one seems like a no-brainer.

Sale Price 7.99
Buy Now
3rd Party 5
In Stock.
See what people are saying about this story or others
See Comments in Forum
Previous Next
Pre-Orders
Tomorrow's latest releases