A look at a seemingly placid New England town that is actually wrought with illicit affairs, crime and tragedy, all told through the lens of Olive, whose wicked wit and harsh demeanor mask a warm but troubled heart and staunch moral center. The story spans 25 years and focuses on Olive's relationships with her husband, Henry, the good-hearted and kindly town pharmacist; their son, Christopher, who resents his mother's approach to parenting; and other members of their community.

Director Lisa Cholodenko took on the unenviable task of adapting Elizabeth Strout's Pulitzer Prize-winning novel 'Olive Kitteridge' into a four-hour miniseries for HBO. With Frances McDormand in the title role, Cholodenko peers at the many characters of Crosby, Maine through the eyes of her protagonist, taking the sprawling multi-narrative account of Strout's novel and delivering a powerful, heartfelt adaptation that is arguably one of the best stories television had to offer in 2014.

McDormand heads up a phenomenal cast that includes Richard Jenkins as Olive's pharmacist and long-suffering husband Henry, Rosemarie DeWitt, Peter Mulan, Jesse Plemmons, Zoe Kazan, and Bill Murray, to name a few. The miniseries spans much of Kitteridge's adult life, from her days as a strict schoolteacher, to her increasingly lonely time as a retiree. Brutally honest to the point of being insensitive, and sometimes driven by emotions she seemingly doesn't want to feel, Olive is a deep, complex character of multitudes, brought to life by McDormand's virtuoso performance.

Set in a small coastal town, the story paints a compelling portrait of life in an intimate community, weaving several threads together, but viewing them all through Olive's exacting, judgmental lens. Her perceptions are spot on as frequently as they miss the mark. Olive's unfiltered observations tend to cut too deeply, and more often than not, they fail to be turned inward. She is full of tough love for her neighbor (DeWitt), who is slowly losing the battle against depression, but years later, Olive is patient and compassionate with that neighbor's now grown son, who is embroiled in the same emotional struggle. 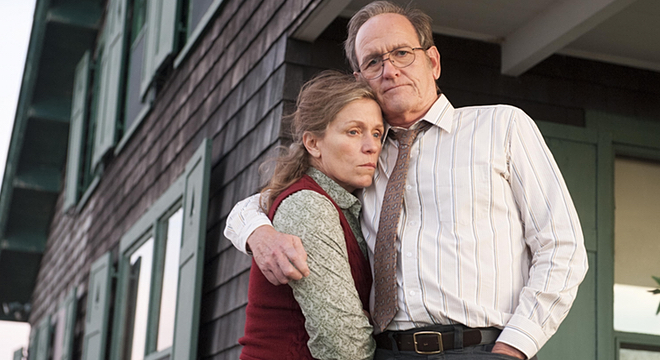 The Kitteridge homestead is also a place of multitudes. Olive's relationship with Henry is best described as ineffectually devoted – more so on his behalf though, as she is harboring a secret relationship with a fellow schoolteacher played by the gruff-voiced Peter Mullan. Tension between the emasculated Henry and his domineering spouse often come to a head during family's stressed dinners, set in the relative modesty of their kitchen. The scenes around the table grow increasingly uncomfortable time and again, as passive aggressive barbs are flung from husband to wife and back again, usually with Henry meekly accepting some form of defeat.

Things between the two become more contentious, when Henry takes a not entirely wholesome interest in his new clerk, Denise Thibodeau (Zoe Kazan). The mousy Denise is the polar opposite of Olive, and Henry's doting on her in the aftermath of a tragedy is met with powerful scorn and biting invective from his wife that is worsened considerably by its exactitude. But the couple is more than their differences, more than the surface-level spats and their seeming incompatibility. The complexities of their relationship are implicit in the performances of McDormand and Jenkins, who dance around Olive and Henry's foibles to generate underlying warmth that defies explanation and carefully eludes to how their conflicting personalities have struck some kind of tacit accord.

Broken into four one-hour episodes, 'Olive Kitteridge' explores as many of the novel's different threads as it can. Adapted by Jane Anderson, the miniseries frequently jumps forward in time, skillfully maneuvering around dramatic changes through conversation and visual exposition. What begins as an exploration of Olive's sometimes irrational behavior and blunt proclivities, unfolds into an exploration of what the changing environment means to the title character, who, despite her protestations to the contrary, finds she is changing right along with the world she sees passing her by.

Cholodenko is well versed in painting intimate but exaggerated portraits of families in flux. Her work on 'Laurel Canyon' and 'The Kids Are Alright' is present here, as the penetrative glimpse into the dysfunctional but functioning Kitteridge clan uncovers similar motifs of yearning, possessiveness, dejection, and acceptance – all while maintaining a carefully balanced sense of humor and drama. Episodes typically run the gamut from laugh-out-loud funny to heartbreakingly intense, but it does so without venturing into territory that is too saccharine or too dour. 240 minutes is a lot of time to maintain that balance, but Cholodenko seemingly does so with ease.

And yet, 240 minutes feels insufficient in some ways to tell the complete story of 'Olive Kitteridge.' Perhaps it is a testament to the wonderful performances and the lived-in characters the actors have created that it leaves the viewer with a sense of wanting more. This isn't necessarily a fault of the production, as Cholodenko and Anderson have crafted a tight, compelling – sometimes sprawling story – but rather a result of the influence of its source material. Many threads are examined to their fullest – the relationship between Olive and Henry being a testament to that claim – but the final hour does feel strained at times to accommodate Olive's profound realizations that come when she's met with tremendous loss and the fractured relationship with her only son Christopher (John Gallagher Jr.).

The miniseries introduces these elements so late that Olive's interactions with Christopher and his new wife (Audrey Marie Anderson) feel as though they are in competition with the strange bond she develops with a sad, wealthy widower played by Bill Murray. As a result, the interesting dynamic between the obdurate Olive and Murray's equally unbending Jack Kennison becomes an element of fascination that isn't allowed to fully marinate and develop into as impactful a conclusion as perhaps the miniseries deserves. Still, leaving your audience wanting more is typically a sign that you've managed to touch a nerve and leave and impression.

As one of the best miniseries of the year, 'Olive Kitteridge' certainly does both. 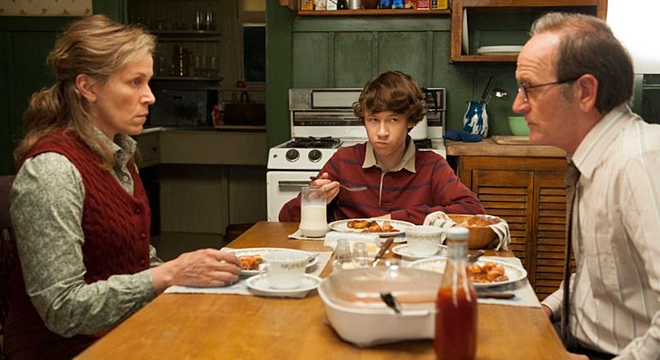 'Olive Kitteridge' comes from HBO Home Entertainment as two 50GB Blu-ray discs + Digital Download in the standard two-disc keepcase. The case is housed in a cardboard sleeve that features the same artwork as the insert – which is the same as the miniseries' poster.

The 1080p AVC/MPEG-4 encoded transfer delivers a sharp, consistent picture that is in keeping with HBO's high standards. Though it lacks the big-budget appeal of 'Boardwalk Empire' or 'Game of Thrones,' 'Olive Kitteridge' showcases its down-to-earth setting very well. The coastal views of the Kitteridge home deliver gorgeous views, while the subtler indoor settings are filled with great detail.

With that said, it should come as no surprise that he image is loaded with fine detail. Facial features are on full display, delivering fine lines, facial hairs, and other elements in nearly every scene. Close-ups are highly detailed, while medium and longer shots maintain a certain level of detail with only slight drops. Backgrounds and clothing textures both look great, and are enhanced by the images consistent high levels of depth.

Contrast remains high throughout. Black levels are strong, and shadow delineation is quite good. There is no evidence of banding or crush anywhere in the image. White levels maintain the proper tone, never looking blown out or running too hot. The image will occasionally let the light bleach the sky behind it, but this, too, looks great. At the same time, colors are well balanced and vivid. Blues and reds pop appropriately, while the earthy tones of the series' palette come through without overwhelming the rest of the image.

This is a sharp two-disc set that hardly wavers in its consistency.

'Olive Kitteridge' is almost completely reliant on its ability to deliver accurate, crisp dialogue, as that is the miniseries' bread and butter. Thankfully, the audio delivers high quality dialogue from start to finish. Actors all sound terrific, as there are no traces of problems with pitch or tone; dialogue is given an even sound throughout.

But the dialogue is also balanced against the musical score and the atmospheric sounds that add a great deal to the miniseries' ability to sell its setting. Composed by Carter Burwell, the score emanates primarily through the center and front speakers, but occasionally will stretch out to the rear channels for a more immersive experience. Mostly, the rear channels help deliver a sense of place and a fully realized environment, as every setting comes complete with its own host of atmospheric noises that make the audio far more complex than one might realize. The sounds of a bustling downtown, men tromping through the woods, or a car driving along at night all create a believable listening experience.

Most scenes are enhanced by even the smallest details. There are a few moments here and there when the sound feels flat, but these can feel like deliberate decisions to play up the significance of the scene. It isn't necessarily a detriment, as the difference between a particularly busy scene and one filled with silence can be striking at times

Overall, this collection has been given outstanding audio.

'Olive Kitteridge' does not contain any special features.

Featuring more fantastic performances than you can shake a stick at, 'Olive Kitteridge' does a fine job in bringing a complex set of characters to life. There is no one more complex and fascinating that the titular Olive, however, and thanks to the fabulous performance of Frances McDormand, the character has become as fully realized as she is in the novel. Bolstered by Lisa Cholodenko's directing, this is certainly a great way to spend 240 minutes of your time. With a great image and superb audio, this affecting miniseries still comes recommended despite a lack of extras.

Sale Price 23.96
List Price 29.98
Buy Now
3rd Party 49.95
In Stock.
See what people are saying about this story or others
See Comments in Forum
Previous Next
Pre-Orders
Tomorrow's latest releases