Dreamworks Animation strikes me as a studio forever struggling to escape the stark shadow of industry monolith, Pixar Animation. For every critically-acclaimed series-starter its animators have delivered (the unexpectedly engaging ‘Kung Fu Panda’ immediately springs to mind), the company’s overall success has been hindered by bland productions like ‘Shark Tale,’ ‘Over the Hedge,’ and ‘Bee Movie,’ as well as mediocre sequels to ‘Shrek.’ People can debate the merits of these shrug-worthy films as much as they want, but there’s no denying Dreamworks Animation has had a notoriously difficult time reproducing Pixar’s patented magic.

’Madagascar’ tells the tale of four domesticated Central Park Zoo animals who inadvertently find themselves stranded in the untamed jungles of an African island. This ragtag band of wildlife brothers includes Alex (voiced by Ben Stiller), a spoiled and stubborn lion; Marty (Chris Rock), a zebra who longs to live in the wild; Gloria (Jada Pinkett Smith), a feisty, pampered hippopotamus; and Mellman (David Schwimmer), an anxious giraffe suffering from debilitating hypochondria. These unlikely friends have to deal with Alex’s introduction to his dormant carnivorous instincts, a pack of hungry fossas, and a strange tribe of native ring-tailed lemurs.

As an animated film aimed at both adults and children, ’Madagascar’ does a decent job appealing to both crowds by combining loftier references with plenty of slapstick shenanigans. Stiller, Rock, Pinkett Smith, and Schwimmer bring strength, compassion, and dedication to their roles, all while establishing breezy and convincing chemistry. Enhancing their efforts is a fine supporting cast that features a veritable who’s-who of scene-stealing performers like Sacha Baron Cohen, Andy Richter, and Cedric the Entertainer, just to name a few. Together, the voice actors elevate an otherwise flimsy script and underdeveloped plot to achieve something that repeatedly brushes ever-so-close to greatness.

Sadly, the film flounders at times because the main characters, as written, simply aren’t that interesting. When a quartet of militaristic penguins, a pair of highbrow chimps, and a collection of lemurs dominate the spotlight every time they strut on screen, you know there’s a problem. Alex’s battles with his appetite are repetitive and predictable, Marty’s return-to-his-roots rhetoric is uninvolving, and Gloria and Mellman only seem to exist to provide comic relief. While there are solid laughs to be had throughout, they often come as the result of the characters who haven’t been tasked with driving the plot along. Sure, ‘Madagascar’ is a kids’ flick at heart, but it shouldn’t have to dumb down its heroes to register with younger members of its audience. Honestly, I regularly found myself wishing the film would check back in with the penguins or the chimps.

As family entertainment, ‘Madagascar’ works. However, when compared to any Pixar flick on the block, this fish-out-of-water tale fails to offer the same level of multi-generational appeal, can’t establish its own identity and momentum, and doesn’t quite nail the balance of its characters, humor, and story. In the end, ‘Madagascar’ is better than average, but doesn’t have the personality or wit to stand out from the crowd. 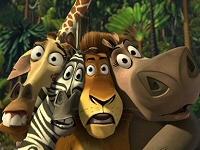 ’Madagascar’ arrives on Blu-ray with an excellent 1080p/AVC-encoded transfer that makes the film’s lush colors and vibrant primaries look absolutely stunning. Like most BD releases minted directly from a digital source, its palette is clean and stable, contrast is bright and vivid, and blacks are deep and inky. Detail is flawless as well, revealing every intricate texture and fine background element the animators placed in each scene. Better still, the picture doesn’t appear to be filtered or artificially enhanced in any way.

I did catch a few instances of faint artifacting and wayward banding (the latter being a very common issue with animated features), but each issue merely held the transfer back from perfection and ultimately failed to spoil the impact of the presentation. As it stands, ‘Madagascar’ joins the ranks of other visually stunning, CG-animated BD releases and should easily impress fans, newcomers, and genre aficionados alike. 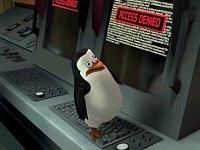 While ’Madagascar’s Dolby TrueHD 5.1 surround track isn’t nearly as distinguished as its video transfer, it nevertheless does a commendable job representing the film’s unexpectedly limited sound design. First, the good. Dialogue is crisp, perfectly prioritized in the mix, and neatly housed across the front soundscape. LFE support is generous and robust (albeit sparse), often adding a welcome sense of weight to key scenes. Likewise, dynamics are above average and help the film’s busier scenes achieve a diverse spread of low and high-end tones. Alex’s roar, the action-oriented scenes of the third act, and the film’s soundtrack feature more notable clarity and heartier rumbles than they ever did on DVD.

Unfortunately, the rear speakers are docile and unresponsive, producing a front-heavy soundfield, a lackluster ambient presence, and a mix that rarely allows the listener to achieve a suitable level of immersion. Don’t misunderstand: from a technical standpoint, this TrueHD track doesn’t suffer from any glaring audio gaffes, however, it certainly won’t win the affections of any serious audiophile. 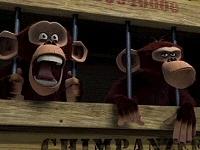 The Blu-ray edition of ‘Madagascar’ includes all of the supplemental material that appears on the standard DVD, presents a decent portion of the content in high definition, and even tacks on an exclusive trivia track. Granted, the actual value of the features is limited by familiarity, but both parents and kids will find a few things to enjoy. 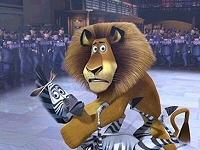 ’Madagascar’ is a decent family flick that children will adore and parents will find mildly amusing. Thankfully, the film’s Blu-ray debut is more reliable. It features a gorgeous video transfer, a technically sound TrueHD audio track, and a generous collection of supplements that has something for everyone. If you’re a fan of the film, this release is a no-brainer. If you haven’t seen it before, rent it and enjoy a fun evening with your kids.