A supernatural thriller driven by fantasy, mystery, and romance, Horns follows Ig Perrish (Daniel Radcliffe), the number one suspect for the murder of his girlfriend, Merrin (Juno Temple). Hungover from a night of hard drinking, Ig awakens one morning to find horns growing from his head and soon realizes their power drives people to confess their sins and give in to their most selfish and unspeakable impulses–an effective tool in his quest to discover what happened to his girlfriend and exact revenge on her killer. Based on the best-selling novel by Joe Hill.

Daniel Radcliffe trades in his wand, broom and the signature round eyeglasses for a pitchfork, a legion of snakes and a pair of bony horns in Alexandre Aja's 'Horns.' Granted, three years after the last 'Harry Potter' flick and impressive leading roles in 'The Woman in Black' and 'Kill Your Darlings,' the young British actor has arguably made the rounds to distance himself from the adventures of the young Harry which turned him into a star. But far as I see it, Mr. Radcliffe only now truly sheds any lasting memory and association to the brave half-blood wizard by playing the emotionally distraught Ig Perrish. In the wake of his childhood girlfriend's murder, the Seattle native wrestles with the loss and toils to maintain his sanity while shunned by a community convinced he did the slaying. Though the story doesn't always work as well as the filmmakers wish it to, Radcliffe's compelling performance holds it together.

Loosely based on the novel by Joe Hill, pseudonym of Joseph Hillstrom King, son of legendary horror author Stephen King, the plot is a highly interesting blend of horror fantasy, crime fiction and mystery. Mostly revolving around solving the death of Merrin Williams (a rather disappointing if not also gravely underused Juno Temple), the story's real strength and weight, where Radcliffe serves as the center, comes from a young man confronted by harsh public judgment and a family that doubts his innocence. Unfortunately, the script by Keith Bunin fails to fully explore and expand on the psychological dilemma of this, treating it as narrative device, eschewing the potential and possibilities in favor of the fantastical and supernatural elements implied by the title. However, Ig suddenly growing horns and their purpose goes largely unexplained, except for a quick, flippant remark that he'll play the role others believed him to be. 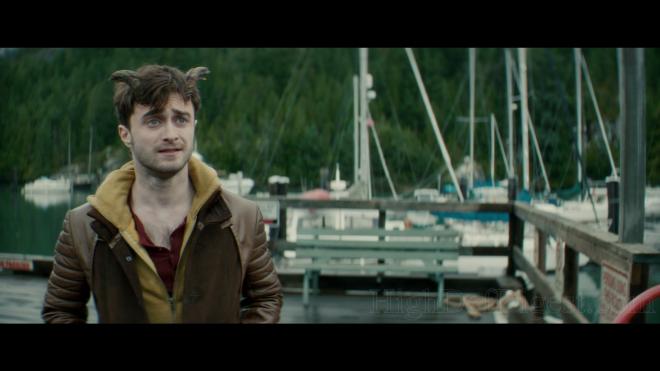 Entertaining as it is to watch the character reactions to the abruptly-grown protrusions, especially when they feel the urge to confess their darkest desires and impulses but immediately forget doing so, it is nonetheless somewhat distracting audiences are not given better reasoning other than unfair societal pressures. The confessions add humor while Ig slowly learns the horns grant certain preternatural powers, like giving people permission to enact their otherwise forbidden fantasies or being able to see a person's most recent sin with a touch. Later, he discovers he's also a bit of a snake charmer, which he uses for avenging himself against those who spoke ill of him, but again, it's another interesting aspect never fully realized to worthwhile effect. This sort of laziness extends to the murder mystery itself where observant viewers are quickly clued in to the true culprit, frustrating the story by featuring a protagonist apparently too dense to see the obvious and turning the runtime into a bit of a chore.

And in spite of this, 'Horns' manages to charm and delight just enough to keep one from walking away and see how it all turns out. It's an entirely gratifying conclusion because it only grows all the more fantastical and supernaturally weird without explaining the reasoning while also losing some of its whimsy. Thankfully, "New French Extremity" auteur Alexandre Aja maintains interest with some visually creative shots and angles with the help of celebrated cinematographer and early David Finch collaborator Frederick Elmes ('Eraserhead,' 'Blue Velvet,' 'Ride with the Devil,' 'The Ice Storm,' 'Synecdoche, New York'). Though lacking the same level of suspense and shock as seen in 'Haute Tension,' Aja and Elmes fabricate a bizarre but wickedly fun reality inhabited by repressed evildoers where the power of suggestion can turn an innocent man into a devil for justice.

Anchor Bay Entertainment and Dimension Films bring 'Horns' to Blu-ray on a Region A locked, BD50 disc housed inside the standard blue keepcase. After several skippable trailers, viewers are taken to a menu screen with music and full-motion clips.

The fantasy thriller grows a devilishly good pair on Blu-ray with an excellent 1080p/AVC MPEG-4 encode taken directly from a digital master. Shot entirely on high-def cameras, the video sadly looks every bit like its source, meaning noticeably sterile and smooth. However, photographer Frederick Elmes makes up for it with a stylistic choice that has the Seattle locations looking particularly drab and dreary, which also complements the plot. Contrast and brightness nonetheless remain well-balanced with crisp whites, deep true blacks and strong shadow delineation. The deliberate look also drains the 2.39:1 image of most colors, though primaries are still bold and cleanly rendered. Although fine object details and textures are sharp and very well-defined, the transfer can at times be on the slightly blurry, soft side. Yet, the picture is in overall excellent shape.

'Horns' makes a big ruckus and commotion at home that's quite pleasing and engaging. The DTS-HD MA soundtrack fills the soundstage right from the start with the music of French pop-rock musician Robin Coudert, creating a welcoming and spacious image. The score and song selections also lightly bleed into the surrounds while various subtle atmospherics participate to immerse the listener. It's not always consistent, with several noticeable moments of silence, but it's effective nonetheless and satisfying for a small, independent drama. The lossless mix exhibits a clean, detailed mid-range and excellent balance between three main channels, and dialogue is precise and intelligible throughout. Low bass is plentiful to provide depth and weight to the music and action, but it's nothing too demanding or particularly impressive.

Despite some serious issues with a rather weak script, Alexandre Aja's 'Horns' manages to entertain thanks to an excellent performance by Daniel Radcliffe and a great visual design from cinematographer Frederick Elmes. The Blu-ray arrives with an excellent audio and video presentation that satisfies, but lacking any worthwhile supplements. The overall package is ultimately for Radcliffe fans and the curious.