The true story of the artist, writer and cerebral palsy sufferer Christy Brown, based on his own book. It recounts the many problems he faced growing up in his native Ireland, and charts the ways in which he developed the use of his left foot - the only limb over which he had any control - to achieve success as an artist. Oscars were won by Daniel Day-Lewis (playing the adult Brown) and Brenda Fricker (playing Brown's mother).

In the late 80s and going into the following decade, it seemed as though some of the most remarkable and memorable performances involved actors playing people with disabilities. Dustin Hoffman and Robert De Niro were high profile A-list actors who stunned moviegoers with their respective portrayals of Raymond Babbitt and Leonard Lowe. Other actors, like Holly Hunter, Tom Hanks and Leonardo DiCaprio in 'What's Eating Gilbert Grape,' soon followed to great acclaim in the first half of the 1990s. But in spite of those, the one I would argue which has left a lasting impact and remains the most memorable — along with Hoffman's, of course — is Daniel Day-Lewis's award-winning depiction of Christy Brown. As the Dublin author and painter with cerebral palsy, Day-Lewis gave an earnest and authentic portrayal.

Tasked with playing a man with limited mobility, the London-born actor demonstrates a wealth of talent through a variety of emotional facial expressions, bringing out the humanity behind what most of us are immediately conditioned to perceive as a handicap. It's through Day-Lewis's performance that audiences understand there isn't a plea to pity Brown's impairment or see the disorder as some kind of detrimental affliction. Certainly, we're reminded on some small level to appreciate our own physical capabilities, which we take for granted on a regular basis, and of course, we're naturally compelled to sympathize with Brown's situation. While waiting to be introduced at a special benefit, an early look of Brown's self-portrait with the words "HELL" boldly engraved in the bottom right corner suggests the filmmakers are aware viewers expect the plot to move in this direction.

But the story, based on Brown's own autobiography, isn't intently focused on satisfying these expectations. A childhood flashback sequence is quick to address this assumption and is just as quick to dismiss it so as to arrive at the film's true heart of the matter. His father (Ray McAnally in his final role) and the neighbors thought of Christy as a burden and intellectually disabled, but there always existed an intelligence and awareness that his mother (a wonderful Brenda Fricker) and older sister believed in, which little Christy (Hugh O'Conor) proves when writing the letter A with a stick of chalk in his left foot. Rather than just telling an inspiring tale of a man overcoming various challenges — which he does, such as when learning to speak and gaining recognition for his artwork thanks to Dr. Eileen Cole (Fiona Shaw) — director Jim Sheridan ('In the Name of the Father,' 'In America') aiming for something deep and more fulfilling. 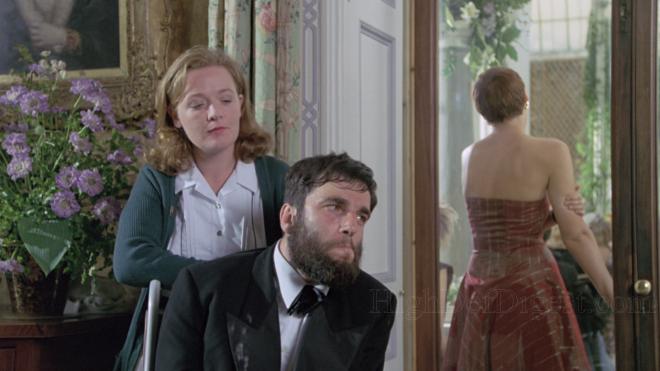 Working from a script he co-wrote with novelist Shane Connaughton, Sheridan wants his audience to appreciate Christy Brown not simply as a person with disabilities but as an immensely talented human being. Glimpses into the man's youth don't merely gain sympathy because he's rejected by a potential love interest and other characters feel sorry for him, but because theses brief memories paint a portrait of a life lived. And we can relate them. We know the pain of a heart broken by our first crush, the pleasure of scoring the winning goal in a game, the struggle of our family enduring economic hardships and the agony of wanting to protect our siblings when our fathers can be at their cruelest. But more importantly, this is the life of a man who wanted to be accepted as he is and loved by a partner. The film concludes on that positive note when Christy meets Mary Carr (Ruth McCabe) at the aforementioned benefit, ending on an uplifting sense of possibilities and hope.

However, for those familiar with Brown's life and history, the story of one of Ireland's celebrated artists doesn't end there. It would seem Sheridan avoids dealing with the couple's troubled marriage and accusations of abuse, but I prefer to think the director does so with the intention of remembering the man as he was before suffering Carr's cruelty. And to a greater degree, Sheridan wants to share a side of Dublin few are aware of, which is part of the beauty and enjoyment in 'My Left Foot.' Through the eyes and memories of Christy Brown, audiences are given a brief peek at the everyday life of a working class family in mid-20th Century Ireland. And it is an absorbing portrait of an accomplished individual, thanks largely to a brilliant performance from Daniel Day-Lewis.

Lionsgate Home Entertainment brings 'My Left Foot' to Blu-ray on a Region A locked, BD25 disc and housed inside a blue, eco-elite case with a code for an UltraViolet Digital Copy. At startup, the disc commences with skippable trailers before switching to a static menu screen with music.

The award-winning film arrives on Blu-ray with a mostly satisfying if only slightly troubled1080p/AVC MPEG-4 encode. Comparatively speaking, the high-def transfer seems to have been made from the same master used for the 2011 special edition DVD, which is actually in pretty great condition. Thankfully, it's not a complete loss since the 1.85:1 image shows very good definition and resolution throughout, but it does have it fair share of soft, blurry moments. The best scenes are highly detailed with revealing textures in clothing, furniture and facial complexions. Contrast is a bit on the weak side though whites are crisp and clean, yet highlights are a tad strong and mildly bloom in a few spots. The overall palette is somewhat wanting and lackluster, making flesh tones appear flushed and drained, but primaries surprisingly remain accurate. Blacks are, for the most part, true and consistent, but there are several spots where they come off too strong and ruing the finer details.

Complementing the video is the slightly more satisfying DTS-HD Master Audio soundtrack. Despite being in surround sound, however, the design is more of a front-heavy presentation and focused on the intimate conversations between characters. Although Daniel Day-Lewis's speech is, at sometimes, difficult to understand, dialogue is nonetheless distinct and precise in the center. Imaging is wide and welcoming, exhibiting excellent channel separation and a strong mid-range. There isn't much discrete activity to be enjoyed, whether in the surrounds or the fronts, but the score occasionally bleeds into the rears, nicely expanding the soundfield. Low-bass is terribly lacking, making the lossless mix feel a tad flat. Still, the high-rez track comes with much to appreciate and gets the job done.

Aside from being a well-structured and dramatic story about a highly talented individual, 'My Left Foot' will probably be best remembered for Daniel Day-Lewis's award-winning depiction of Dublin author and painter Christy Brown. Through the eyes and memories of the artist, director Jim Sheridan gives audiences a peek at the everyday life of a working class family in mid-20th Century Ireland. The Blu-ray arrives with a strong but still wanting audio and picture presentation, and the supplements remain the same as previous home video editions. The overall package is ultimately worth buying for the most devoted of fans.