Diane "Blaze" Sullivan, the host of a nationally televised punk-rock show on New Year's Eve, is receiving calls from a mysterious killer who tells her of his plans to off someone at midnight in each of America's major time zones… and she will be the last.

Starring Roz Kelly (who played Pinky Tuscadero on Happy Days), Kip Niven (Magnum Force), Grant Cramer (Killer Klowns From Outer Space), Louisa Moritz (Death Race 2000), Taaffe O'Connell (Galaxy Of Terror) and Teri Copley (We Got It Made), New Year's Evil injects an "intimate and refreshing viewpoint into what was once a tired old scenario" (Andre Dumas, The Horror Digest)…and then takes you on a non-stop thrill ride of unmitigated terror!

Despite hitting home video a couple months too late, 'New Year's Evil' is nonetheless a fun way to ring in the New Year, delivering all the blood, mayhem and drunken debauchery we'd expect from the last remaining hours of the year. Or at least, it might be fun for loyal, salivating-at-the-mouth fans of the "slasher" horror subgenre, taking the basic blueprint and standard formula to novel territory. Granted, the low-budget production didn't make any attempt at reinventing the wheel or deviate too far from a familiar set course by any means. In fact, because of how close director Emmett Alston adheres to convention, it's much too easy to predict the supposed shock twist at the end, leaving very little room for surprises. However, that isn't to say Alston doesn't try to give viewers a somewhat different and potentially unique angle at a time when screens were flooded nearly weekend with a new holiday-themed psycho-killer flick.

From an original script by Alston and Leonard Neubauer, the filmmakers' most substantial, and arguably appreciable, endeavor is the drastic change from the usual helpless babysitter or lustful, mischievous teens setting. Here, viewers are given a brief tour of Hollywood Blvd as brazen, rascally punks cruise the streets on their way to a televised celebration in an amusingly wink-wink vein of "Dick Clark's New Year's Rockin' Eve." This is about as close as we come to naughty kids becoming the unwitting victims of some masked maniac. As a matter of fact, none of the wild makeup-wearing, crazy-haired hooligans are even part of the story proper, aside from serving as the rowdy, vulgar bunch in a mosh pit. The plot being set during a major event with New Wave music such as this is a welcomed novelty, changing the clichéd formula into a suspense thriller where the identity of the killer is known but his motivations a mystery. 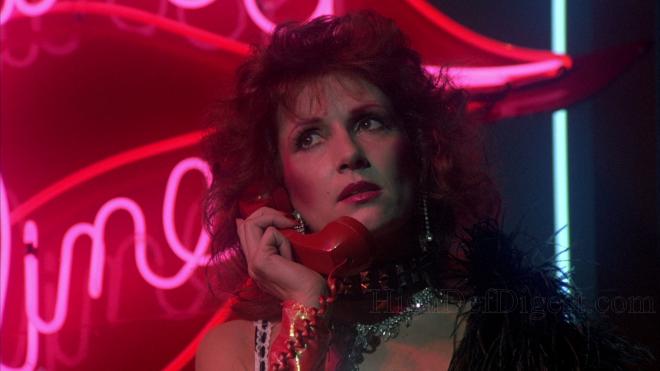 This, in turn, allows Alston the opportunity to be creative with some new possibilities, and for the most part, he does while surprisingly keeping the gore and violence to a comparative minimum. A few hours before the stroke of midnight, our Dick Clark stand-in for this music celebration is Diane "Blaze" Sullivan (Roz Kelly), decked out in new wave garb and treated like a punk rock icon. Former celebrated music photographer, Kelly is probably best known her role as Fonzie's girlfriend on Happy Days, "Pinky" Tuscadero, but here, she works it like an MTV VJ before there was such a thing. The crazed psycho (Kip Niven) phones Blaze while live on television to announce the death of another victim according to each time zone. It's a welcomed spin to the subgenre as with every hour marks a step closer towards our expected heroine's demise. Alston relies on this with a noticeable classical approach to each death scene over the usual graphic violence to engage and entertain his audience.

The director also makes another noteworthy modification to the formula so that 'New Year's Evil' stands out from the rest. Again, it's not something that revolutionized the genre, but it is nonetheless significant. Unlike other "slasher" films of the period, this protagonist is far from the usual likeable, moralistic "Final Girl" seen in the likes of 'Halloween' and 'Friday the 13th.' The TV personality is a selfish, self-centered mother of a distraught, troubled and neglected son (Grant Cramer a few years before turning the reluctant hero of Chiodo Brothers' cult classic 'Killer Klowns from Outer Space'), an aspiring actor the continuously begs for her attention but forced to play second fiddle to mom's show and celebrity status. This alone introduces an emotional dramatic element not seen in other movies of the same category. Admittedly, it's not enough to save the film from obscurity or instantly turn it into a classic, but it sets it apart and makes it a better, smarter watch than others of the same period.

Shout! Factory celebrates 'New Year's Evil' on Blu-ray under the distributor's Scream Factory line. The Region A locked, BD50 disc is housed inside the normal blue case with reversible cover art. At startup, the disc goes to a menu screen with full-motion clips and music.

The horror "slasher" rings in the New Year with an AVC-encoded transfer that easily surpasses all previous home video editions.

Showcasing better clarity and resolution than would be imagined from a small-budgeted, mostly forgotten 80s flick, the source appears to be in excellent condition, consistently displaying well-balanced contrast levels throughout. Background information is plainly visible, showing distinct lettering on walls, buildings and the several amps on stage, while the stitching and threading on clothing is detailed. Most surprising and impressive is the picture exposing the pores, wrinkles and blemishes in the faces of the cast while a cleanly-rendered color palette brightens the 1.78:1 image with bold primaries and warm, accurate pastel hues. Blacks are also rich and opulent with strong shadow delineation, and a thin, stable grain structure provides an appreciable film-like quality.

The switchblade-wielding maniac counts down to the stroke of midnight with a highly-enjoyable DTS-HD MA stereo soundtrack that, like the video, offers a massive improvement over previous lossy counterparts. Unlike other releases, this track displays a broader and more welcoming sense of presence with the tiniest detail and noise coming in crystal-clear, despite the entire design being located in the center. Dialogue and whispered conversations are very well-prioritized and intelligible from beginning to end. Possibly coming from the same elements used for the video, the lossless mix exhibits rich, detailed clarity in the mid-range, delivering excellent distinct separation in the music and action while an adequate low-end provides noticeable weight and depth.

Despite hitting home video a couple months too late, 'New Year's Evil' is nonetheless a fun way to ring in the New Year, delivering all the blood, mayhem and drunken debauchery we'd expect from the last remaining hours of the year. Director Emmett Alston gives viewers a somewhat different and potentially unique angle at a time when screens were flooded nearly every weekend with a new holiday-themed psycho-killer flick. The Blu-ray arrives with a surprisingly good audio and video presentation, but only one bonus feature worth caring for. Nevertheless, the overall package makes for good addition to the cult collection.

Sale Price 24.11
Buy Now
3rd Party 49.99
Usually ships within 5 to 6 days.
See what people are saying about this story or others
See Comments in Forum
Previous Next
Pre-Orders
Tomorrow's latest releases