Code named 'The November Man'; Peter Devereaux (Pierce Brosnan) is an extremely dangerous and highly trained ex-CIA agent, who is lured out of quiet retirement on a very personal mission. He must protect valuable witness, Alice Fournier, (Olga Kurylenko) who could expose the truth behind a decades old conspiracy. He soon discovers this assignment makes him a target of his former friend and CIA protégé David Mason (Luke Bracey). With growing suspicions of a mole in the agency, there is no one Devereaux can trust, no rules and no holds barred.

Imagine if you will that 'The Bourne Identity' and 'Taken' loved one another very much. And as a product of that love, those two films made another film, which they named 'The November Man.' That movie eventually grew up in a punch-filled, but relatively happy home. It was provided for and given everything it could ever want, until one day, it became superficially aware of the various components and narrative beats that made its parents so successful. As time passed, 'The November Man' yearned to continue in the family tradition, to carry on its lineage of box office hits about men with a certain set of skills, embroiled in an international free-for-all. Alas, despite its best efforts, the young film wound up becoming every prosperous parent's worst nightmare: a bungling, inept offspring whose attempt at repeating that for which its parents had earned their reputation feels like a paltry replication and leads to little more than its own complete embarrassment.

Pierce Brosnan may have produced this chimeric action tale with the idea that it would launch a potential franchise, but 'The November Man' is far from the sort of vehicle deserving of an actor who once played James Bond. Instead, the film, directed by previous Brosnan collaborator Roger Donaldson ('Dante's Peak') is a hollow, incoherent, cliché-ridden mess that rides its star's considerable charm so completely that, by the film's end, even the usually luminous Brosnan is straining to deliver more than a 10-watt smile.

The story begins with a lengthy and unnecessary opening sequence in which Brosnan's soon-to-be-retired CIA operative Peter Devereaux and his young, impetuous protégé David Mason (Luke Macey) bungle an operation, leaving an innocent young bystander dead because Mason can't follow orders. For reasons unknown, the story then jumps ahead five years when Devereaux's former handler, Hanley (Bill Smitrovich), convinces him to come out of retirement. The mission: to aid in the efforts to discredit the future president of Russia, Arkady Federov (Lazar Ristoviski). The added incentive being that Devereaux's former flame, Natalia Ulanova (Mediha Musliovic), works for Federov and is feeding intel to the CIA. 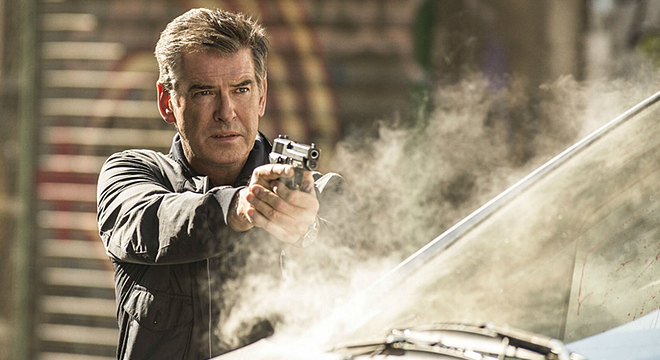 At this point, Will Patton shows up as Perry Weinstein, a CIA handler who looks like a cross between Chris Cooper's 'Bourne' character, Alexander Conklin, and Kevin Costner as Jim Garrison. Weinstein is the archetypal governmental character: cold, calculating and willing to see his own men perish in the line of duty, so long as the job at hand is accomplished. The only problem is: the "job at hand" has become increasingly opaque. That doesn't stop things from once again going awry when Weinstein positions Mason and his team against Devereaux, resulting in yet another unnecessary death that sparks a tense face-off between the student and the master, and ends with them both walking away from an explosion without looking back (that's right, this movie has two, not one, but two badasses who just don’t have time to respond to things blowing up).

Much to the movie's detriment, what begins as a rote, but superficially engaging story of a teacher and his one-time pupil at odds with one another – complete with enough "old man who can still kick ass" references to choke an elephant – turns into something else entirely. After their initial encounter, Mason and Devereaux interact primarily over the phone, eliminating any real sense of tension or excitement. The pair's dealings are pushed further toward the margins when the story introduces Alice (Olga Kurylenko), a social worker who can confirm claims Federov incited the war with Chechnya to improve his own political capital. With Devereaux vowing to keep Alice safe, he is conveniently distracted from his quest to seek revenge against Mason. What's worse, despite the presence of a clear puppet master, Devereaux ostensibly remains ignorant that Weinstein even exists.

Throw in yet another assassin (this time, a woman, played by Amila Terzimehic) chasing Alice, and a Pulitzer-chasing reporter played by Patrick Kennedy ('Downton Abbey'), and the result is a convoluted string of subplots, whose sole purpose, it seems, is to keep the narrative from becoming a cohesive whole. Too often, potentially compelling plot points are left to wither, while seemingly important, adversarial characters fail to cross paths with one another. At one point, the seams on what feels like a fairly substantial rewrite are clear as day, when Weinstein suddenly disappears and his absence is glossed over with such blatant nonchalance you're left to wonder if he's gone to get his mother soup with Wes Bentley's character from 'Gone.' Around the same time, Devereaux's daughter is introduced, while Alice's story takes a sudden ludicrous twist, and, in keeping with the film's fear of having characters interact with one another, neither amounts to anything more than a last minute plot devices to raise the stakes in an already tension-free narrative.

Although 'The November Man' turns out some well-executed action set pieces, it is, overall, a wildly unsuccessful film that makes the same mistake too many burly action flicks make: it confuses "complicated" with "complex." The result is a busy mishmash of action conventions that spends too much time thinking of ways to keep its characters occupied, and not enough time working to make them, their relationships, or their circumstances interesting. 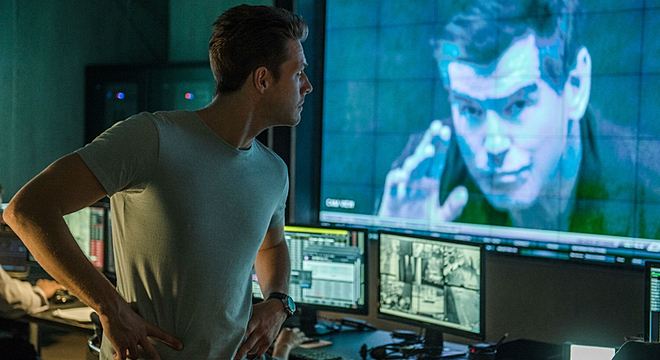 'The November Man' comes from 20th Century Fox Home Entertainment as a single 50GB Blu-ray disc + Digital Download. The film contains several previews, but they can all be skipped to jump directly to the top menu. From there, you can choose between several special features or the film itself. The disc comes in the standard keepcase with a cardboard sleeve on the outside.

The 1080p AVC/MPEG-4 encoded transfer delivers a bright, detailed image that will please audiences. The image is crystal clear and nearly every frame is filled with fine detail that highlight facial features and fine details like hair, texture, and small background elements. The image also has a great amount of depth, giving the many chase sequences a real sense of place that opens up the world and does far more to make it feel lived-in than any of the film's cardboard characters. One particular chase through a busy marketplace, just after Alice has been introduced, delivers a great amount of depth and detail, and it does it all at a quick pace.

Elsewhere, color and contrast are also quite pronounced. The film tends to gravitate toward warmer, earthier colors, allowing certain elements like reds and blues to really pop when they appear onscreen. Explosions resonate as well, as the orange and red fireballs leap off the screen with a clarity and brightness that seems to go beyond the usual, but stops just short of being over saturated. Meanwhile, contrast levels remain consistently high throughout, producing strong edges, and robust black levels that are completely free from banding or crush. White levels are even throughout, allowing daytime sequences to deliver a bright, but still detailed and colorful presentation.

Overall, this is a very good-looking image that, aside from a handful of soft focus issues, could only have been better if it were attached to a more interesting film.

The DTS-HD Master Audio 5.1 mix delivers rousing action sound design that will rattle the walls and immerse the listener in the sounds of chaotic gunplay. Explosions rumble with convincing bass, while the mix works across all channels to create a dynamic and fluid listening experience that works by putting the viewer in the middle of the action.

Kicks, punches, and gunshots all resonate with convincing power, while dialogue remains consistent throughout. The mix balances its various elements quite well, making sure explosions and action-oriented elements work with the actors' dialogue, either making it sound appropriately muffled or right in your face, depending on how he or she is positioned onscreen. In that sense, imaging and directionality play as big a part in making the mix sound convincing as the balance, and it delivers big time. In addition, the rear channels manage to pick up more than the occasional echo, ricochet, or atmospheric element and sometimes help drive entire sequences with strong sound.

This mix is the kind of audio action lovers will want to hear, making this the highlight of what is essentially an underwhelming product.

Making of The November Man (HD, 11 min.) – This featurette is a fairly standard making of that features behind-the-scenes footage, as well as several interviews with the actors and the director. Not much in the way of truly engaging information, but it may be of some interest to fans.

Brosnan is Back (HD, 7 min.) – This short special feature examines Brosnan's return to action and, in a sense, to the spy genre. It is mostly a discussion of the actor's history in action roles, playing up his presence as Bond without actually mentioning it.

Bringing Belgrade to the Big Screen (HD, 6 min.) – The producers and director discuss the advantages of filming in Belgrade and why it makes for such a unique location.

Although it is a disappointment that too often forgets what storyline it wants to follow, leaving too many threads unexplored or abandoned altogether, 'The November Man' at least delivers some rousing action. While this in no way substitutes for a coherent story and actual characters populating that story, the disc's very good picture and even better sound will make it worth a rental.

Sale Price 8.95
Buy Now
3rd Party 2.23
In Stock.
See what people are saying about this story or others
See Comments in Forum
Previous Next
Pre-Orders
Tomorrow's latest releases