Overview - Chinese chiropractor Teddy (Anthony Wong) is a widower struggling to raise his sullen teenage son Nicky (Stephen Fung) and his wild daughter Natalie (Gillian Chung from Twins). Teddy's kids are deeply embarrassed by their Dad's outlandish tales of his glory days. What they don't know is that their father leads a clandestine life protecting retired agents. When an evil nemesis re-appears and kidnaps Teddy to settle an old score, Nicky and Natalie, along with her boyfriend Jason (Daniel Wu), put their martial arts training into action and pummel the assassins that stand in their way.
OVERALL
Skip It

Hong Kong cinema fans may question Tai Seng’s decision to release a light-hearted, Chinese adventure flick like ‘House of Fury’ on domestic Blu-ray when countless other kung fu films are waiting in the wings, but I think there’s a fairly transparent method to the distributor’s madness. As Japanese manga continues to expand its popularity and presence in bookstores across America, the youngest members of its fanbase are beginning to diversify their interests and spend their parents’ hard-earned cash on a variety of other Asian media. Is it any wonder then that a thinly veiled hybrid of ‘Spy Kids,’ ‘Big Fish,’ and ‘Kung Fu Hustle’ is being released in the States?

Teddy Yu (Anthony Wong) is an over-the-hill chiropractor who embarrasses his children, Nicky (writer/director Stephen Fung) and Natalie (Gillian Chung), because he can’t help but tell people outlandish tales about his days as a secret agent and kung fu master. However, when Teddy is kidnapped by a wheelchair-bound, ex-CIA agent (Michael Wong) looking for revenge, Nicky and Natalie realize their father had been telling the truth all along. Using their own martial arts prowess, the siblings go in search of their father, battle legions of baddies, and experience the reality of his fantastical stories first hand.

I doubt many readers will be surprised to learn that ‘House of Fury’ is a bit of a mess. While it’s certainly better than Fung’s ‘Enter the Phoenix,’ it doesn’t have the intensity its action so desperately needs or the wit its tone-deaf humor requires. Riddled with obvious plot holes, a nonsensical series of character developments, and a glaring absence of any serious antagonist, the film can barely deliver a coherent story much less create a compelling family dramedy. Worse still, Fung simultaneously nabs elements from so many other films that ‘House of Fury’ begins to feel like a montage of terribly familiar scenes. Not only does he lift key elements of his plot directly from ‘Spy Kids’ and ‘Big Fish,’ he nabs entire scenes from ‘Shaolin Soccer,’ Bruce Lee’s ‘Fist of Fury,’ ‘Iron Monkey,’ ‘Crouching Tiger, Hidden Dragon,’ ‘The Incredibles’ (of all things), and a number of producer Jackie Chan’s many films.

While most of the film’s misguided homage sequences can be attributed to Fung’s exuberant affection for his influences and inspirations, the real problem with ‘House of Fury’ is that the writer/director neglected to season the production with its own identity. Sure, Yuen Woo Ping’s fight choreography keeps the action exciting, but without engaging characters it’s impossible for any amount of high-flying foolery to overcome a weak infrastructure. Unfortunately, Fung’s script is a disjointed hack job that requires a handheld GPS and a roadmap to navigate. The plot zigs, zags, and inevitably gets distracted by its own tangential subplots. Ah well, at least the film taught me that dolphins make decent psychologists, oxygen deprivation isn’t enough to prevent a man from drawing circles, and paraplegics can use electric wheelchairs to fend off kung fu masters.

I suppose ‘House of Fury’ slightly succeeds on its own airy terms. As a bubble-gum flavored throwback to Fung’s childhood favorites, it gives Anthony Wong and his fellow fighters the opportunity to have a good deal of on-screen fun. As a live-action cartoon, it even has some entertaining segments that depict Teddy’s outlandish stories. I just wish the more dramatic elements of the film were as interesting as his tall tales. Had Fung figured out how to maintain a consistent tone and nail a handful of genuinely funny gags, his attempt at making a martial arts family film could have been more original and endearing.

In the end, ‘House of Fury’ will probably only satisfy younger, entry-level fans of Hong Kong cinema. In fact, if my son was eight or nine, I would sit down with him to watch a film like this without any hesitation. Unfortunately, the film’s superficial story and paper-thin characters aren’t going to captivate any serious fan of the genre and won’t receive the warm reception afforded to wittier fare like ‘Kung Fu Hustle.’ I know a domestic BD release of this nature will rope in quite a few blind buyers, but try and resist such urges. Better releases are coming. 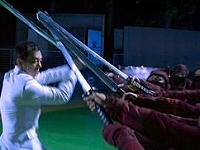 Well, at least it looks good. ‘House of Fury’ features a colorful 1080p/AVC-encoded transfer that even manages to outshine its impressive DVD counterpart. Fung’s palette has been faithfully reproduced (for better or worse) with a welcome level of stability, fleshtone accuracy, and primary vibrancy. Contrast is also strong, creating a three-dimensional picture with a welcome level of depth and plenty of naturalistic shadows. Better still, fine object detail is impressive and consistent. Crisp edges reveal every nick in the warriors’ weapons, sharp textures uncover every wrinkle and stitch in their costumes, and favorable delineation reveals the nuances of the foregrounds and backgrounds, regardless of whether a scene is brightly lit or drenched in shadow.

I do have a few nitpicks, but I’m happy to report they’re all relatively trivial. First, while the film’s darkest scenes are nearly perfect, a handful of cloaked corners fail to exude the inkiness I’ve come to expect from the best high definition transfers. Additionally, seemingly random (albeit infrequent) crushing occasionally clutters the shadows. Lastly, I noticed a half dozen shots look soft compared to the transfer’s showcase scenes and may briefly distract viewers from the proceedings. Even so, the Blu-ray edition of ‘House of Fury’ delivers a gratifying transfer that takes advantage of its move to high definition. Fans will not be disappointed. 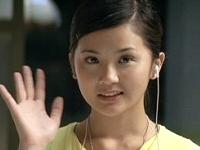 First of all, my hat’s off to Tai Seng for blessing ‘House of Fury’ with the crème de la crème: a Cantonese DTS HD Master Audio 7.1 surround track. While only a few studios are fully embracing the possibilities and potential of high-def audio, it’s nice to see that even a smaller distributor can provide fans every current sonic bell and whistle Blu-ray has to offer.

Unfortunately, even a technically superior track can’t overcome the inherent inadequacies of bland, poorly mixed sound design. Perhaps Fung wanted his sound effects to have the hollow, tinny impact of classic martial arts films, but I thought the shallow hits and kicks were a distraction that prevented me from immersing myself in the mix. Adding insult to injury, pans are stocky and obvious, occasionally delivering the feel of an over-the-top adventure film without packing any significant punch. Worst of all (at least for fans of dubbed tracks), the Dolby Digital 5.1 English mix is absolutely atrocious -- it suppresses the integrity of the soundfield and provides an almost exact reproduction of the heavily-compressed audio track featured on ‘House of Fury’s standard DVD.

Luckily, dialogue on the DTS HD MA track is clean, clear, and generally well prioritized in the mix. There were a few lines that wavered beneath the action, but the subtitle track prevented any frustration. Improving matters, decent LFE supports allows for some deep low-end rumbles, the rear speakers are populated with plenty of subtle and aggressive ambient effects, and the musical score is spread comfortably across the central channels. Overall, the disc’s lossless 7.1 track handles everything it’s given with technical ease. I just wish the sound design itself had more to offer fans of the film.

(Note the subtitles on this release appear over top of the black bars.) 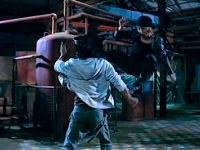 The Blu-ray edition of ‘House of Fury’ has the same lengthy features as the standard DVD, but that’s not saying a lot. The supplements don’t offer many solid details about the production, the content is repetitive, and the video segments are presented in poorly encoded standard definition. 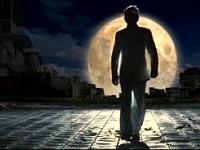 The Blu-ray release of ’House of Fury’ may offer genre-hungry fans an enticing proposition, but it doesn’t deliver the goods. The film itself is a mediocre hybrid of superficial action and clumsy homage, the DTS HD MA audio track suffers from a poorly mixed source, and the “special” features are anything but. The only bright spot on this dismal disc is an excellent video transfer, but it isn’t impressive enough to rescue this release from a destiny at the bottom of the bargain bin. Unless you’re a sucker for wasting cash or have rented this one already, skip this Tai Seng title and wait for the distributor to release better kung fu films.

Sale Price 14.72
Buy Now
3rd Party 69.99
In stock. Usually ships within 2 to 3 days.
See what people are saying about this story or others
See Comments in Forum
Previous Next
Pre-Orders
Tomorrow's latest releases