After ten years of estrangement, twins Maggie and Milo coincidentally cheat death on the same day, prompting them to reunite and confront how their lives went so wrong. As the twins' reunion reinvigorates them both, they realize that the key to fixing their lives just may lie in fixing their relationship with each other.

With its cast comprised of actors known more for their comedic performances, 'The Skeleton Twins' could just as easily have been called 'Funny People Make With the Melancholy.' That's not a knock on the film concerning estranged twins Milo and Maggie (played by Bill Hader and Kristen Wiig, respectively) who are suddenly thrust back into one another's lives after Milo's suicide attempt, but rather the most obvious reason for giving this achingly conventional yet sometimes funny excursion into gloominess a look.

Hader and Wiig give persuasive performances as middle-aged siblings coming to terms with the fact that life isn't going to work out the way they wanted it to. That familiar "life sucks, deal with it' narrative is prefaced by a shallow flashback of the twins as children, dressed up for Halloween, while their father – an indelible yet unseen presence throughout the film – clad in a skeleton mask hands each child an ornament that – you guessed it – is a skeleton. There's a sadness permeating the scene, the feeling of which is heightened by the hollow-voiced narration and further underlined by the idyllic images of children playing in a swimming pool while golden shafts of light streak down from the sky. The simplistic blatancy of it all suggests director and co-writer Craig Johnson graduated from the Zach Braff School of Hackneyed Cinema.

The inflated opening is but one of several threadbare elements woven into the film and made worse by their rapid-fire succession. During the making-of featurette, it is mentioned that Johnson and his co-writer Mark Heyman began working on the script many years ago, when they were still fresh-faced film school graduates. That explains a lot. The script is not without its charms, but those charms do not outweigh the crushing obviousness of its faux indie sensibilities and its all-too stale Sundance-y aspirations. The fact that 'The Skeleton Twins' won Best Screenplay at Sundance speaks volumes about how the festival and the films that are given prizes there have increasingly become watered down imitations of the films that made the Park City, Utah the mid-'90s destination it once was. 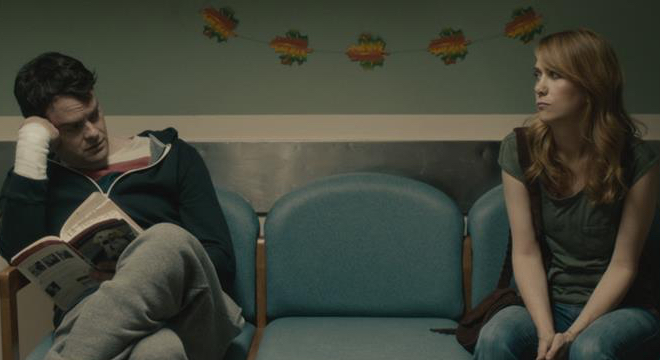 All of this is rather unfortunate, because the cast, comprised of the aforementioned Hader and Wiig, along with Luke Wilson and Ty Burrell of 'Modern Family' fame, actually make for an engaging ensemble. Hader and Wiig have a natural chemistry (unsurprising, considering their professional history together) that affords some charming moments when the two are allowed to just go wild and improvise. The first involves a lot of nitrous oxide and some fart noises, while the second revolves around the two lip-synching to Starship's 'Nothing's Gonna Stop Us Now.' The casualness of these scenes helps underline the fundamental nature of the siblings' relationship, suggesting they're far better off together than they ever were apart. It's just too bad the script doesn't let those moments speak for themselves, and instead has Milo call attention to their solidarity during one of the many unforced moments of conflict.

And there is conflict everywhere. So much of it, there's hardly a second to breathe without fear that an argument or cringe-inducing conversation is going to spontaneously erupt. After Maggie takes Milo home to help get his life in order (and hers, too) his arrival back on the East Coast dredges up a decade's worth of unspoken history with their estranged mother, and a former high school teacher played by Burrell. Unfortunately, the majority of what Milo's return pulls from the sediment of the sibling's lives is ostensibly old news, so any engagement in it requires sifting through a great deal of exposition in order to pull up a single nugget of drama. Meanwhile, Maggie's persistent infidelity provides some in-the-moment conflict, but her Australian scuba instructor Billy (Boyd Holbrook) is so far removed from any of the other situations, his contribution to the story is nominal at best.

The problem is, 'The Skeleton Twins' is just far more watchable when Milo and Maggie are effortlessly returning to a familiar rhythm. Their fraternal familiarity generates the film's most convincing moments and works in the same way all the conflict simply doesn't. The implicit history between the two is made explicit through their interactions. The film doesn't need to tell the audience 'Nothing's Gonna Stop Us Now' was a staple from their childhood because the action of the moment informs with far greater emotional persuasiveness than the writers' words are able to muster. The same goes for a late-in-the-movie segment when the twins go out on the town for Halloween – their father's favorite holiday. Again, just watching the two together is more convincing than the fight capping the whole thing off.

The film ends up with a handful of decent scenes amongst countless moments that just don't work, or work so hard at working, they're practically bursting at the seams. 'The Skeleton Twins' could have benefitted from better editing, as well. Too many scenes go on for far too long, and the film shows its hand far too soon in many of the early sequences, making the denouement (what is it with certain filmmakers and swimming pools?) a rote pedestrian inevitability, rather than the insightful culmination of events it was clearly intended to be.

The story has indie sensibilities all over it, but they don't feel genuine or earned. Instead, this shallow paint by numbers effort wastes a talented cast by not giving their solid performances enough of a foundation to stand on. 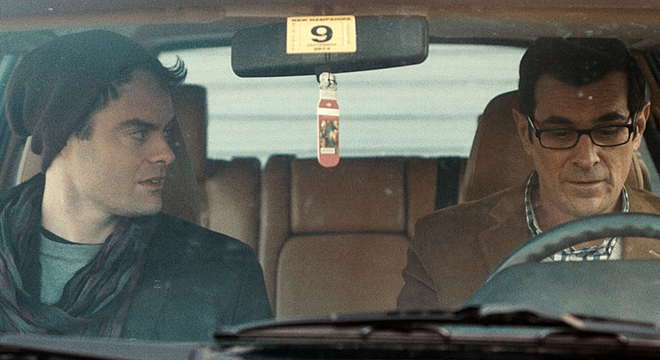 'The Skeleton Twins' comes from Lionsgate as a single 50GB Blu-ray disc in the standard keepcase, with an outer sleeve that sports the same cover art. There is also an insert with the information for a digital download of the film. The disc itself begins with about 98-minutes of previews and introductions of the Liongsgate logo. If you're still in the mood to watch a film after all of that, you'll have the option of selecting the film itself, one of the two commentaries, or the special features that have been supplied.

'The Skeleton Twins' boasts a 1080p AVC/MPEG-4 encoded transfer that generates a solid image that is dulled somewhat by what appears to be a little tinkering with the color to make it artificially warmer or colder. For the most part, the image looks natural – especially during the exterior sequences – but certain moments look exaggeratedly golden, making the image as synthetic as most of the film.

Still, there is a great deal of nice detail layered throughout the film, and the warm palette doesn't seem to affect the depth of the image – which, once again, is superb during the shots that take place outside. Facial features are pronounced in close-up as well as wider shots. Textures are apparent in clothing, foliage, and simple background elements. Detail even remains high during darkened scenes, like the aforementioned Halloween sequence that involves a great deal of exterior holiday lighting. Features are not diluted or lessened in any way, keeping the image consistent throughout.

Contrast is also high throughout, resulting in an even white balance that never looks overblown, and blacks that are deep and inky. Edges are sharp against the black background and there's no hint of crush anywhere. Banding isn't an issue either.

All in all, then, this is a competent image that rises above some of the filmmakers' misguided instincts to deliver nice detail, contrast, and color.

The DTS-Master Audio 5.1 mix is a quiet affair that plays up the film's reliance on dialogue by making it the focal point of almost every scene. Dialogue is crisp and clean, easily heard across a wide variety of atmospheres. The delivery of the dialogue is such that the rest of the film's score, music cues, and sound effects generally come in a distant second, and it shows on the mix.

Most of the ambient effects come from the front right and left speaker, when not being delivered by the center channel. Rear channels are rarely in use; they generally provide a small sampling to enhance a character being underwater, or in a busy tavern, but mostly they go unused. It's hard to say whether they film would have benefited from a more robust and immersive mix, but the lack of such is noticeable.

Again, this is a quiet movie, so there's not a lot going on outside of the characters talking to one another. The end result, then, is that mix doesn't have a lot to do, but what it does it handles well. Dialogue comes first (and last, really), so judging the quality of the sound mostly comes down to that one aspect, and 'The Skeleton Twins' at least delivers on that front.

To Whom it May Concern: Making 'The Skeleton Twins' (HD, 15 min.) – A fairly typical featurette that explores the making of 'The Skeleton Twins' by interviewing the filmmakers, as well as the actors. There's an unexpected level of insight into how Johnson and Heyman came up with the script, which will be interesting for those who were taken with the film.

Outtakes – It's hard to tell what's 'Gag Reel' material and what's fit for the 'Outtakes' section, so the supplements just provided both, even though they're basically the same material.

Kristen Wiig and Bill Hader Improv Takes for Dentist Scene (HD, 3 min.) – This is a lengthy sequence where the two do their best to not laugh at the other. It's a funny bit that ultimately doesn't work, but it's worth seeing here.

Too much of ‘The Skeleton Twins’ is centered on the development of unnecessary and utterly convenient conflict. That’s a shame considering the film has two engaging leads who offer a far more compelling thread for the film to explore, and it’s in those moments that this effort actually delivers a glimpse at something worthwhile. Unfortunately, the filmmakers are far more interested in playing up the more artificial aspects of the narrative, than investigating the more organic elements that are right at their fingertips. Still, the disc offers a nice image and good sound, along with a surprising array of special features. This one might be worth a rental.

Sale Price 24.99
Buy Now
3rd Party 18.7
In Stock.
See what people are saying about this story or others
See Comments in Forum
Previous Next
Pre-Orders
Tomorrow's latest releases