The release of Lucrecia Martel's 'La ciénaga' heralded the arrival of an astonishingly vital and original voice in Argentine cinema. With a radical take on narrative, disturbing yet beautiful cinematography, and a highly sophisticated use of on- and offscreen sound, Martel turns her tale of a decaying bourgeois family, whiling away the hours of one sweaty, sticky summer, into a cinematic marvel. This visceral take on class, nature, sexuality, and the ways political turmoil and social stagnation can manifest in human relationships is a drama of amazing tactility and one of the great contemporary film debuts.

Lucrecia Martel's 'La Ciénaga' offers a startling look at decadence in decline. The film's micro setting of a once-wealthy Argentine family's estate, on the outskirts of the macro environment of Salta, pushes the lens so close into the lives of its characters that there is no longer any room for intimacy; there is only an uncomfortable proximity begat by the lack of clarity with regard to the relationships set within this troubling family dynamic. It is closeness that willfully reveals nothing.

Martel's lens is never far from the humid intimacy of the family at the film's center. Much of that familiarity is depicted through the preteen and teenaged children who hang around and cling to their ragged, wine-soaked mother, played by Argentine film star Graciela Borges. Borges' Mecha and her husband Gregorio (Martin Adjemián) are sloth defined. Neither appears to work – though there is talk of a once-thriving enterprise involving peppers – nor do they appear sober throughout the run of the film. While Gregorio comes and goes, Mecha wallows away in her room, waiting out the hot summer days, wearing little more than a silk negligee and a pair of oversized sunglasses, all the while nursing some nasty wounds suffered in a drunken fall during the film's illusory opening sequence.

Martel's fusion of proximity and ambiguity asks questions about Mecha's matriarchal role in the family, but that is only part of what makes her debut feature so beguiling. In lieu of clear-cut distinction, sight and sound play pivotal roles in the director's creation of a wholly realized world – one where the verisimilitude of the setting allows the telling to act in an unpredictable manner. Martel uses imagery and sound to plunge the viewer into a deep, layered story that is itself telling  larger truth about Argentina's past, albeit through an oblique perspective on specific, culturally-based circumstances. 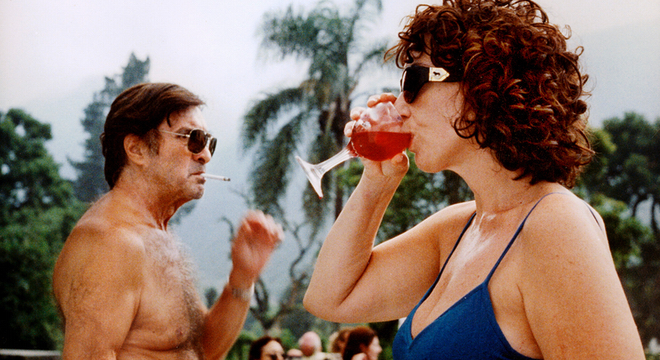 'La Ciénaga' – or 'The Swamp' – is Martel's name for her hometown, but it also speaks to the condition of Mecha and Gregorio's lives and the lives of their children. The family is sinking imperceptibly into the spongy shallowness of their own existence. And, in a way, there is a swamp-like quality to the manner in which Martel deftly moves between characters and their threads. There is no clear foundation; the film does not follow one character in particular. Instead it steps in and out of many stories, often entering en media res and leaving before the scene has a chance to be resolved. This permeable form of storytelling results in a hazy demarcation of the relationships within the family unit. The only clear delineation is the one between the family and their servants, who are all Indians – a word which, when spoken by Mecha, is imbued with a pejorative intonation. But even that class distinction becomes blurred, when Momi (Sofia Bertolotto), a girl in her early teens, works through her feelings for Isabel (Andrea Lopéz), one of the many servants the house looks down upon, but relies on heavily.

The sense of indistinct boundaries set around otherwise clearly defined relationships is a common occurrence throughout the film. The eldest child, José (Juan Cruz Bordeu) is visiting home from Bueno Aires, where he is involved in what appears to be a romantic engagement with an older woman named Mercedes. But the relationship is never fully defined. Instead, Martel skillfully allows a multitude of interpretations to coalesce around a single association. Seeing José sleeping in the same bed as his mother at first leads to more questions, which are only answered obliquely when it becomes clear that Mecha's room is a communal napping place. But this does nothing to deter the film from exploring the potential unseemliness between José and his sister Verónica (Leonora Balcarce), which begins with her displeasure at the mere mention of Mercedes' name, and continues when José interrupts his sister's shower under the pretense of rinsing off his muddy leg.

All of these interactions and the potential risk involved with them add to the overwhelming awareness that the family's world is somehow nearing an end. The self-indulgence of the parents has given rise to something similar in the children, who, when not slumped in a heap on their mother's bed, are inciting catastrophe by running around the mountains with rifles. One young boy's face is covered in dark scratches, while another, Joaquín (Diego Baenas) awaits surgery to remove a non-functioning eye and correct the strip of scar tissue draped over a portion of it. In another instance, danger lurks during an afternoon spent swimming at the dam, when the children hang languorously in the water while Indian boys hack away at catfish with their machetes just inches from the siblings' faces.

Martel also achieves this sense of doom by depicting the house in a state of disarray and disrepair – a broken filter and water pump transform the once-cooling oasis of the swimming pool into a fetid pond of murky water and dead leaves. She is aided audibly by the occasional reverberation of thunder in the distance, or by a barking dog that terrifies little Luciano (Sebastían Montagna), despite being on the other side of a ten-foot wall – again demonstrating the importance of sound to the cinematic and thematic texture of the film.

From the first moment to the last, Martel frames 'La Ciénaga' in the sense that upheaval is pending, that a great unraveling is waiting just around the corner. That may spell disaster for the family at the center of the narrative, but it may also be the only way they will ever truly recognize the state in which they find themselves. And doom does come in an unexpected and ambiguous way. In the end, Martel suggests the truth as well as danger can never really be seen, so long as those looking continue to ignore the sound of storm clouds gathering on the horizon. 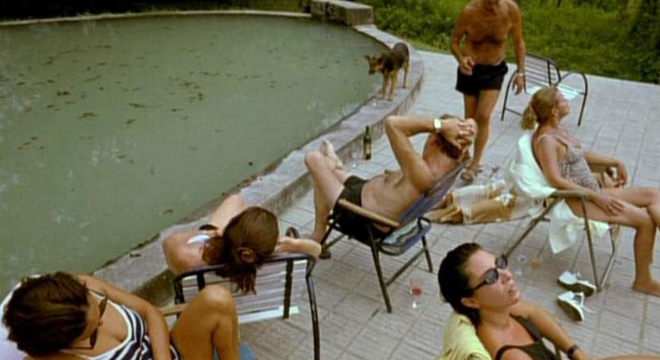 'La Ciénaga' comes from Criterion as a single 50GB Blu-ray disc in the standard clear Criterion keepcase. The case is lined with a double-sided insert that feature images from the film, while the spine is numbered 743. Along with the disc, there is a multi-page foldout insert that contains a terrific essay by film scholar David Oubiña.

Although the film is not very old – it was released in 2001 – the image has been given a considerable facelift via a new 4K transfer that offers a tremendous level of detail and color quality in nearly every frame. Fine detail is plentiful, despite a layer of grain that is noticeable throughout. The grain never gets in the way of the image, though; it actually adds to the presentation by giving the film a more grounded, grimy feeling. Still, facial features, clothing textures, and background elements are all on display – though there are a few instances where the image shifts to a shot that is hindered by soft focus or a problem with the source material that dramatically reduces the sense of depth, as well as the level of detail. Thankfully, this only happens about three times during the film, so it does not undermine the overall quality of the transfer.

Colors are bright and vivid, breathing life into the film's outdoor setting and making the drab interiors come alive with colorful clothing sometimes worn by the family members. Contrast is high throughout. Shadow delineation is terrific, offering a smooth transition from light to shade to complete darkness. In that regard, the black levels produce a consistent inky blackness that doesn't swallow up fine detail. Whites are handled with equal skill, as the image never looks blown out or too hot.

Overall, minus a few missteps here and there, the image is very good and will please those familiar with the film as well as newcomers.

The DTS-HD 2.0 audio handles Martel's inventive and deliberate use of sound quite beautifully; giving life to the world she's built by making each small detail come alive in a way that would seem unlikely with a 2.0 mix. Dialogue is given priority for the most part, but, like, say, Robert Altman, many scenes are meant to be a chaotic mix of many people talking, while sound effects bounce around, making the listener unsure of whom they should be listening to. It's a unique way of handling audio, but sound is so important to 'La Ciénaga' it becomes of the technical highlights of the disc.

Even though certain scenes seemingly devolve into mishmash, the audio never produces anything less than a clear, distinct sound. Voices are easily heard, while sound effects are equally discrete. The sound is spread around the two channels evenly, giving the sense of atmosphere and immersion, despite the limited channels at its disposal.

This is a strong audio mix for a film that relies heavily on sound to give it the impact it desires.

Interview with Filmmaker Andrés Di Tella (HD, 24 min.) – Di Tella discusses the cultural context that produced Martel and what her groundbreaking feature film meant to cinema at the time. He goes into great detail about the film itself, and his analysis is quite interesting.

By creating such a unique film and by fragmenting the scenes in the specific way that she does, Martel refuses to give the audience an overt picture of what she is trying to say. Such a statement has given her film a genuine sense of curiosity that, as di Tella says, is as though the audience is forced to view the film as if through the perspective of a child. And that makes sense; the thought that something more is going on in each scene is, like context has been stripped away, is present throughout the film. The audience can sense that something is wrong, but it lacks the ability to ever truly be "in the know". In that regard, 'La Ciénaga' is the rare debut feature that comes ridiculously close to perfection. Altogether, if you take into consideration the terrific picture, great sound, and interesting interviews, this film comes highly recommended.

Sale Price 27.99
List Price 39.95
Buy Now
3rd Party 10.02
In Stock.
See what people are saying about this story or others
See Comments in Forum
Previous Next
Pre-Orders
Tomorrow's latest releases