Candyman: Farewell to the Flesh

A victim of unspeakable evil while he lived, the "Candyman" (Tony Todd) has become evil incarnate in his afterlife. This time, he haunts the city of New Orleans, where a young schoolteacher named Annie Tarrant (Kelly Rowan) is struggling to solve the brutal murder of her father. The locals insist that he was slain by the Candyman, but Annie is not convinced... until she unwittingly summons the monster forth, learns the secret of his power, and discovers the link that connects her to him. But can she stop him before he kills again?

In the horror sequel 'Candyman: Farewell to the Flesh,' director Bill Condon tries to recreate the same surreal, dreamlike effect of Bernard Rose's 1992 loose adaptation of a Clive Barker short story. For much of the production's 91-minute runtime, Mr. Condon does admirably well with several otherworldly moments although he can't seem to consistently maintain that level of mystery and moody atmosphere which has made Rose's movie a genre favorite. Nevertheless, there is a good deal worth appreciating, particularly when looking at the director's entire filmography. This follow-up, set a few years after the first and relocated to New Orleans during Mardi Gras, comes from the same imaginative talent behind 'Gods and Monsters,' 'Kinsey' and 'Dreamgirls.' Even in the final two 'Twilight Saga' entries, his camerawork stands out as the most impressive aspect, an effort to transcend the dreadfully maudlin material with some elegance.

Traces of Condon's talent can be seen in here, once again enthusiastically trying to rise above the material with some class and style, which is not suggest that the story is by any means terrible. Tony Todd reprises his role as the eponymous ghostly figure that was unjustly tortured and killed for falling in love, and as before, his presence is a haunting vision of both terror and poignancy. Although audiences are meant to fear the character, there are small glimmers of sympathy attached, and Todd's performance adds to those contradictory emotions with a facial expression of a man in pain, almost as if he'd been crying or hates that his resentment has turned into a murderous rage that kills indiscriminately. Condon takes advantage of this with close-ups of Todd immediately following wide and mid shots showing Candyman dispatching another victim with his large hook hand in gloriously gory detail — something to appease hungry horror-hounds. 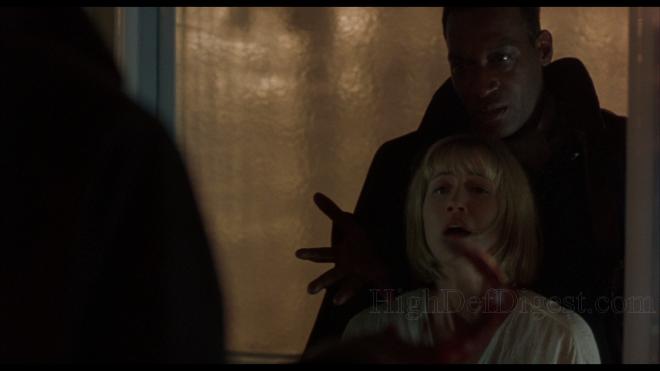 While Condon makes great use of his star attraction and Todd delivers his memorably iconic performance as Candyman, there is good reason for the character's dour demeanor and woeful expressions, as audiences find out in this mostly satisfying sequel. From a story by Clive Barker himself, the film explains, and even shows, more of the sympathetic monster's background that's topped off with a flashback sequence towards the end of the second act. Doing a book and signing tour, professor and avid expert on the "Candyman" legend Philip Purcell (Michael Culkin, who also returns from the first feature) kicks things off with a history lecture and his subsequent murder. In an effort to clear her brother's name (William O'Leary), art teacher Annie Tarrant (a surprisingly good Kelly Rowan) does her own research and investigation, discovering that a secret hidden by her mother (Veronica Cartwright) links her family to the legend.

Along with Todd's performance and Condon's camerawork, learning more about the titular character is arguably the best part of the production, which finishes with an entertaining showdown in the family mansion. In  'Candyman: Farewell to the Flesh,' fans learn that Candyman's name is Daniel Robitaille, the son of a slave who rose through the ranks of the aristocracy, only to be betrayed by the community's bigotry. This not only adds to the legacy, but in actually showing his death, the character is shown to be an ironic hero of sorts. Unlike other monsters of the genre, Candyman's violently passionate wrath on those who dare call his name five times while staring into a mirror is one born of a furious bitterness towards humanity in general, which he reveals in his near-poetic and fervent speeches before each kill. Rarely are sequels as good as their predecessor, which is the case here, but this continuation from Bill Condon is a strong and mostly satisfying follow-up.

Shout! Factory brings 'Candyman: Farewell to the Flesh' to Blu-ray under the distributor's Scream Factory line. The Region A locked, BD50 disc is housed inside the normal blue case with reversible cover art. At startup, the disc goes to an animated menu with full-motion clips and music.

The horror sequel finds its way to Blu-ray with a good and sufficient 1080p/AVC MPEG-4 encode. Although the overall presentation doesn't quite satisfy expectations, this new transfer, likely taken from the best available elements, is an upgrade to previous home video editions. The 1.85:1 image is nicely detailed with sharp, fine lines in the clothing and the New Orleans architecture, and facial complexions are fairly revealing, especially during close-ups. On the other hand, the picture is a bit on the soft side with slightly better than average contrast, some mild ringing around objects and the occasional splatter of white specks. Black levels are accurate with strong shadow delineation while colors are cleanly and richly rendered, and the image is awash with a thin layer of grain.

As per usual, Shout Factory offers their latest sacrifice to hungry horror-hounds with a pair of strong audio tracks, both in DTS-HD Master Audio. The first is a front-heavy 5.1 soundtrack with a clean, detailed mid-range, generating a wide, welcoming soundstage. Dialogue is precise and intelligible amid lots of activity occupying all three channels, and low bass provides some hearty weight to the action and music. Surrounds are occasionally employed with good, discrete directionality, nicely expanding the soundfield but the music of Philip Glass does most of the work.

The other is a lossless stereo mix that interestingly isn't that much of different, aside from the use of the rear speakers. Dynamic range is clean and detailed with an adequate low-end and well-prioritized vocals. Glass's score is again most impressive, creating a broad, appreciable image.

In the horror sequel 'Candyman: Farewell to the Flesh,' director Bill Condon does admirably well in recreating the same surreal, dreamlike effect of the first film but can't seem to maintain that level of mystery and moody atmosphere. Nevertheless, and with another great performance from Tony Todd, it is a strong and mostly satisfying follow-up. The Blu-ray arrives with a very good audio and video presentation, and although supplements are fairly light, the overall package is sure to please fans.

Sale Price 14.99
List Price 16.97
Buy Now
3rd Party 35.88
In Stock.
See what people are saying about this story or others
See Comments in Forum
Previous Next
Pre-Orders
Tomorrow's latest releases