If you haven’t read Cormac McCarthy’s strikingly bleak, Pulitzer Prize winning novel, “The Road,” turn off your computer and get to a bookstore ASAP. To be blunt, the “No Country for Old Men” author’s post-apocalyptic stunner is one of the finest pieces of literature I’ve ever had the pleasure of digging through in one, long sitting. However, for those of you who’ve already experienced the book, you’re no doubt as excited and nervous as I am about the theatrical adaptation coming to theaters this November. Thankfully, the film is being helmed by John Hillcoat, an upstart Australian director whose 2005 study of revenge and loyalty, ‘The Proposition,’ brought audiences a similar glimpse into the bonds of family and the desolate heart of mankind.

Set in the Australian Outback in the late 19th century, ‘The Proposition’ opens as a pair of outlaws, Charlie (Guy Pearce) and Mikey Burns (Richard Wilson), are captured and accused of viciously attacking a local family. Before they’re put to death, a gruff and cruel officer named Captain Stanley (Ray Winstone) makes the boys a deal: if Charlie can find and kill his oldest brother, an elusive psychopath named Arthur Burns (Danny Huston), Stanley will wave the charges and release them. Yet all is not as it seems. Charlie is a decent fellow grappling with his duty as a brother and his instincts as a victim. Stanley isn’t the unyielding adversary he appears to be, but rather a loving family man trying to establish a safe home for his wife, Martha (the wonderfully subtle Emily Watson). As each man struggles to survive his own chaotic circumstances, he's forced to choose between family and foe, life and death, and right and wrong.

To simply call ‘The Proposition’ a Western is to do it a great disservice. Like ‘Unforgiven’ and ‘The Wild Bunch’ before it, Hillcoat’s film focuses on men who aren’t simply righteous or evil, but rather complicated human beings challenged to make some hard choices. While both Charlie and Stanley are forced to endure a series of events that drag them each through the proverbial mud, neither one can be labeled as a typical protagonist or antagonist. As it is with every character in the film, appearances can be deceiving and, even then, a person’s lot in life doesn’t necessarily result in predictable behavior or logical reactions. Hillcoat allows his characters to reflect on their lives and make weighty, life-altering decisions -- you feel sympathy for Charlie’s plight regardless of his deeds, root for Stanley in spite of his unraveling plan, and begin to understand the instability simmering behind Arthur’s eyes.

To make things even more interesting, Hillcoat hurls his morally ambiguous characters into a world populated with uncertainty, brutality, and death. The gifted filmmaker laces each scene with a palpable sense of dread that permeates every leer, scream, and exchange. Even Martha’s quaint haven fails to protect her husband from the consequences of his decisions -- in fact, the delicate simplicity of their home becomes the stuff of nightmares when Arthur pays the Stanleys a third act visit. As Hillcoat turns scoundrel into hero, security into peril, and allegiance into unconditional love, he weaves a tale through silent exchanges and sun-drenched locales as much as through its plot and dialogue. By the time the credits roll, the film leaves no doubt that it's much more than your average Western.

’The Proposition’ is a bit too short to flesh out its supporting characters as well as I would have liked, but it’s tough to fault a film that develops such compelling leads. In the end, Hillcoat’s Western is a dark and demanding piece of cinema that engages the mind as much as the gut. Its characters are multifaceted, its tale is tragic, and its dialogue is brimming with intellect and revelation. ‘Unforgiven’ aside, there are few other modern Westerns that live up to such lofty pursuits and bleak thematic explorations.

Easily boasting one of the finest, bargain-priced Blu-ray presentations I’ve ever reviewed (and arguably one of the best transfers this year), ‘The Proposition’s gorgeous, 1080p/VC-1 transfer defied my expectations and left me wondering why larger studios feel the need to charge so much more for so much less.

Hillcoat’s color palette is drenched in yellow and brown, but still allows for vibrant primaries, relatively natural skintones, and deep, filmic blacks. Contrast is as perfect as it comes and the image boasts a startling degree of depth and dimensionality. Better still, crisp fine details offer DVD owners a substantial upgrade -- each piece of stubble is clearly defined, long shots look fantastic, and textures reveal every nick and rip in the characters’ clothing. Image clarity is also incredible. While I didn’t detect any post-processing interference, grain is light and nearly invisible, DNR hasn’t been applied, and the picture doesn’t suffer from any significant artifacting, crushing, or source noise. In fact, the only distraction I encountered was a bit of lingering edge enhancement. Granted, it’s not nearly as thick or intrusive as the EE on the standard DVD, but thin halos still outline objects set against the bright horizon.

You’ll probably grow tired of reading it again and again throughout my review, but I’m simply floored by the fact that such an impressive disc is available for ten bucks. Even if you visit an overpriced retail outlet like Best Buy, you can still net this wonderfully-encoded gem for less than $15. 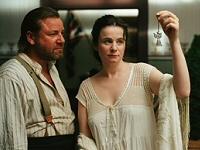 While the audio experience isn’t as impressive as the video transfer, the culprit seems to be the film’s limited sound design rather than the technical proficiency of the disc’s Dolby TrueHD 5.1 surround track. Although the story is bookended with explosive confrontations, the central hour of ‘The Proposition’ is a conversational affair (albeit a crisp, well-prioritized one) that doesn’t feature the involving sonics one might expect from such a violent Western. The organic drone of the desert is well represented, but interior acoustics and general ambience leave something to be desired. Likewise, the LFE channel and rear speakers do a fine job with what they’re given, but ultimately aren’t tasked with any serious aggression. Fortunately, the soundfield still creates a fairly immersive experience that uses smooth pans and precise directionality to keep the intermittent action fierce and frightening.

‘The Proposition’ simply doesn’t have the sonic goods necessary to produce a reference quality audio track. Even so, I doubt the film will ever sound any better than it does here. As it stands, fans should be more than pleased with this faithful, well-crafted lossless mix. 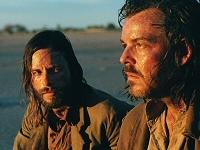 The Blu-ray edition of ‘The Proposition’ includes all of the extensive special features that appeared on the domestic DVD, and even packs in extra material from its 2-disc UK release. The only major downside to the supplemental package is that the disc’s video content is presented in standard definition. 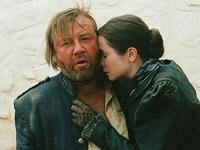 ’The Proposition’ offers a pair of fascinating character studies, delivers a gut-punch tale of brotherly love, and always charts unexpected paths. This new Blu-ray edition of the film from Image Entertainment is quite a surprise as well. It features a striking video transfer, a faithful lossless audio track, and a generous collection of supplements… all for less than fifteen bucks (eleven if you nab it on Amazon.com). It even has a classy cover to boot. All in all, the BD edition of ‘The Proposition’ is an absolute steal and shouldn’t be missed.

Sale Price 9
Buy Now
3rd Party 4.36
In Stock.
See what people are saying about this story or others
See Comments in Forum
Previous Next
Pre-Orders
Tomorrow's latest releases