Before the start of its seventh and final season, ‘Sons of Anarchy’ was already facing a considerable narrative deficit. This was due in large part to the decisions made in its penultimate season, when two vital, series-defining storylines were eliminated, leaving precious little to be resolved during the biker series’ highly-publicized “final ride.” The shortage of storytelling possibilities meant the show barely had enough fuel left in the tank to necessitate 13 episodes, let alone 13 over-stuffed episodes, some of which ran for 90-minutes or more.

Ultimately, the narrative was done in by the dearth of Jax Teller’s (Charlie Hunnam) villainous stepfather, Clay Morrow (Ron Perlman) and his long-suffering wife Tara (Maggie Siff), whose volatile relationships with Jax and his murderous mother Gemma (Katey Sagal) were major forces, driving the series for almost the entirety of its run. As it stands, in season 7, those two are out of the picture – courtesy of Jax's propensity for execution and Gemma's barbeque fork – meaning the only thing driving the plot of the so-called "final ride" is Gemma hiding the secret that she killed Tara, and Jax becoming a rage-filled hate tank (more so than usual), on the lookout for anyone he can blame, torture, and kill for the death of the woman he had absolutely no on-screen chemistry with.

That turns season 7 into an unruly slog of poor time management, and flimsy storytelling that relies far too heavily on gratuitous acts of gruesome violence, character deaths lacking substance, and ultra-thin subplots that wind up going nowhere.

The season begins with Jax missing out on Tara's funeral because he's behind bars, so when he finally gets out, the only thing on his mind is sweet, sweet revenge. The only problem is: he has no idea who actually did the deed. Naturally, no one in Charming bothers to do any actual police work – let alone care that Sheriff Eli Roosevelt (Rockmond Dunbar), was killed as well – so Jax is led to believe his mother's lie that a member of Henry Lin's (Kenneth Choi) crew was responsible. And without so much as an ounce of verification, Jax begins a string of ugly murders that are punctuated more by the show's unsuccessful attempts to shock and disgust, than they are by any attempt at giving the loss of life any actual significance. 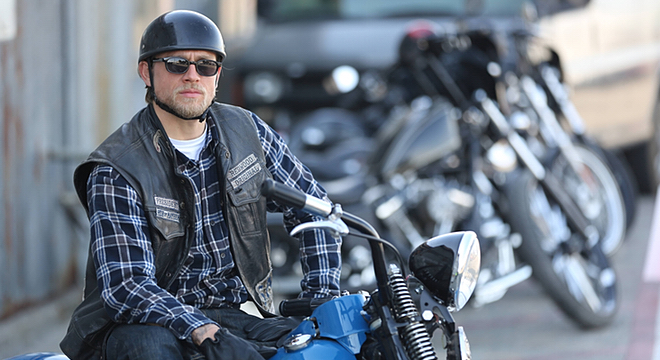 Like the storyline, much of the season's violence feels arbitrary. It is glib and juvenile most of the time, lessening the impact of the brutality with every headshot, stabbing, beating, prison-rape, and more. In the season premiere, Jax tortures a man he doesn't even know. He ends the innocent man's suffering with a symbolic (to him) barbecue fork to the brain. The season's love affair with superficial violence includes an escort service being showered with bullets, resulting in the death of a dozen women. But it continues with the arbitrary murders of several minor characters, Jax's execution of another club's president, and the brutal torture of Bobby Munson (Mark Boone Junior), in which his eyeball is laughably sent to his friends in a tupperware.

And that's just the tip of the iceberg.

Violence is a storytelling tool, and it can be a very effective one in stories that are meant to take place in ferocious worlds like the one 'Sons of Anarchy' is depicting. It would be one thing if this violence were meant to mean something, for it to have significance within the framework of the narrative, or even the subtext. But, as it has been from the get-go, the series isn't interested in continuing the conversations it starts about the nature of violence; it never feels like it wants to do anything more than shock an audience already desensitized beyond belief after having watched the previous six seasons.

Instead, the violence is like everything else wrong with the season: It's just thrown in just because it could be, just because the story is so desperate for something to happen while it treads water until Jax inevitably discovers the truth about his mother. This is a season that seemingly had no oversight, no one saying, "You know what? Maybe we shouldn't be doing that." That's the best way to explain why so many episodes ran so long, with much of that extra time being devoted to artless montages and characters doing nothing more than explaining the plot to one another. Episode after episode felt less like progression and more like a circuitous example of a creator getting lost in byzantine storyline he'd unwittingly brought to end 10 episodes too early.

Thankfully, 'Sons of Anarchy' season 7 isn't entirely a long slog of unjustified violence and awful music cues that lead to perfunctory chase sequences or lengthy montages where characters stare mournfully out windows. There is some actual gravitas to be had, but it only happens in the later episodes.

For one thing, Tig (Kim Coates) begins a relationship with transgendered prostitute Venus Van Dam (Walton Goggins), and the two have a powerful conversation about where their feelings for one another are headed. The moment is a rare example of honesty that's not then hit with a glib remark or hint of sarcasm. Additionally, Jimmy Smits' Nero Padilla is given a poignant scene in which he discovers the truth about Gemma, which leads to the character's fulfilling denouement that is at least in keeping with his arc.

The honesty of those moments helps undercut the disappointing confrontation between mother and son, which had been the crux of the season-long storyline. After all the build-up, all the pain and the bloodshed, the moment feels rushed and mechanical, too reliant on a visual metaphor that steals the moment away from the characters and makes it feel like a twisted Hallmark card, rather than the culmination of seven seasons worth of storytelling. What's worse, the scenario repeats itself in the series' climactic moment, which is laden with bad CGI and symbolism so blunt the only remarkable thing about it is that a cast member didn't stare straight into the camera and explain it to the audience.

But it can’t be said that ‘Sons of Anarchy’ creator Kurt Sutter didn’t get the chance to play the series out exactly as he wanted. So, perhaps there's something positive to be gleaned from the season after all. Unfortunately, that has less to do with the quality of the episodes or the storytelling, and more to do with FX's creative direction, and willingness to let their creators (over) indulge themselves, even when it doesn't necessarily work. 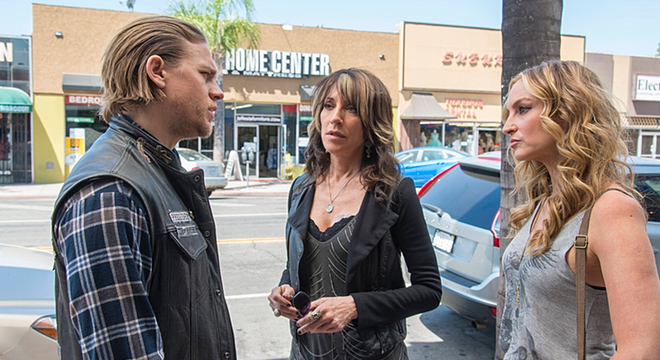 'Sons of Anarchy: The Final Season' is a 4 50GB Blu-ray disc set inside an oversized keepcase. The keepcase is housed inside a plastic sleeve that features a different tattoo on Charlie Hunnam's back, than the one on the insert. The reverse side of the insert gives disc details, like episode titles and special features. Discs one, two, and three offer only deleted scenes, while disc four offers more substantial supplements.

Keeping with the rest of the seasons, the transfer on the discs is superb. The level of detail is very high for the most part – aside from a few instances where the focus looks a little soft and facial features are reduced somewhat. Most of the detail is prominent in close-up, but wider shots do offer a nice look at certain textures and background elements. Despite the darkness of the series, most of the show is filmed in broad daylight, which tends to help the detail, as the fictional town of Charming comes to life with the sharp picture and vivid colors.

Contrast also plays a big role in making the setting feel lifelike. Blacks are generally full-bodied and offer a great range in terms of shadow delineation, running from gray to solid black without a hint of crush or banding anywhere. Some of the daytime scenes appear to run a little too hot, but that may be a function of the show's general aesthetic, so it can be taken with a grain of salt. Colors are vivid throughout, even during darker sequences. Reds and blues pop brilliantly, while the black leather usually worn by the members of SAMCRO looks inky from start to finish.

Overall, this is a very nice looking transfer that maintains a high level of quality from start to finish.

The DTS-HD Master Audio 5.1 mix is notable for ensuring the dialogue (every painful, recursive second of it) is crisp and sharp from the season's first minute, all the way to its last. But the mix also delivers impactful sound effects and high-energy musical cues that make full use of the 5.1 channels at its disposal.

Most of the dialogue is directed through the center channel speaker, but the more frenetic action sequences will push character voices through any number of speakers. In that sense, the directionality of the mix is quite impressive. Bullets zing through the rear channels, and explosions resonate with the mix's use of LFE. Immersion is established in certain sequences where ambient noises fill the rear channels and make the setting feel more lived-in and real. Scenes like diners, truck stops, and bars all feature nice atmospheric sounds that are delivered cleanly.

Since the series is action-based, there's plenty of other elements to keep the viewers happy, but the mix never lets these factors overwhelm the audio. This is a well-balanced collection of discs that will please fans of the show with its terrific sound.

Carpe Diem: The Final Season of 'Sons of Anarchy' (HD, 72 min.) – This incredibly in-depth retrospective of the series features an astonishing amount of interviews from the cast and crew that span the full seven seasons. This is a must-see feature for any fan of the show.

Anarchy Legacy (HD, 5 min.) – Series creator Kurt Sutter and the producers discuss what the show means to television, and how the series will be perceived after it's gone.

Guests of Anarchy: Season 7 (HD, 7 min.) – This is a look at the guest stars who graced the final season of 'Sons of Anarchy' with their presence. Guests like: Marylin Manson, Lea Michelle, and Hal Holbrook.

Let's be honest, 'Sons of Anarchy' was never anything more than a C+/B- show at best, but even then, there was always something to keep the audience busy. In its final season, the show had painted itself into a corner, where the only thing it had left were its obnoxious five-minute montages and a bunch of hackneyed metaphors – the final one being so egregious as to be laughable. This may have been the show's epic final ride, but too often it seemed like the series was stalled out on the side of the road. With terrific picture and sound, and some interesting supplements, the 'Sons of Anarchy: The Complete Seventh Season' is a nice collection, but it is still for fans only.

Sale Price 7.75
List Price 59.99
Buy Now
3rd Party 7.75
In Stock.
See what people are saying about this story or others
See Comments in Forum
Previous Next
Pre-Orders
Tomorrow's latest releases