Portions of this review also appear in our coverage of the 2D 'Boxtrolls' Blu-ray.

Wonderfully imaginative and wickedly delightful, with splashes of offbeat visual grandeur, 'The Boxtrolls' amuses and charms with a darkly comic story that surprisingly touches on adult themes about devious political collusions, the effects of the propaganda machine, and the dangers of preoccupied, negligent fathers. While these somber, possibly nightmare-producing matters do play an important aspect on the surface of the plot, enough to be the impetus which moves the story along, the filmmakers maintain the action light enough to enchant young audiences and thrill parents. But looking beyond that, families can feel gratified by the real heart of the tale, a good-natured message about not falling victim to the conniving machinations of others and knowing that change doesn't mean not being true to one's self. This is a good deal to cover for a children's flick, but animators deliver a challenging and fascinating charmer.

From the same folks that also brought us the darkly wondrous 'Coraline' and 'ParaNorman,' the Laika Studios production interestingly opens on an ominous note, as screams yell accusations of kidnapping, and we see an infant carried away in the middle of a stormy night by a creature wearing a ragged box. The very abrupt prologue not only adds a sense of mystery, but the presumed abduction becomes an opportunity for the grotesquely unkempt pest exterminator Archibald Snatcher (voiced by Ben Kingsley) to scheme a membership into the town's exclusive cheese-loving council. The outlandishly deformed weasel-like man promises the mayor and head of the White Hats Lord Portley-Rind (Jared Harris) freedom from the hideous ravages of the boxtrolls by eradicating them all, which is to say he will commit genocide. He wins public support by misinforming people with tales of the creatures' hunger for flesh, especially the young. 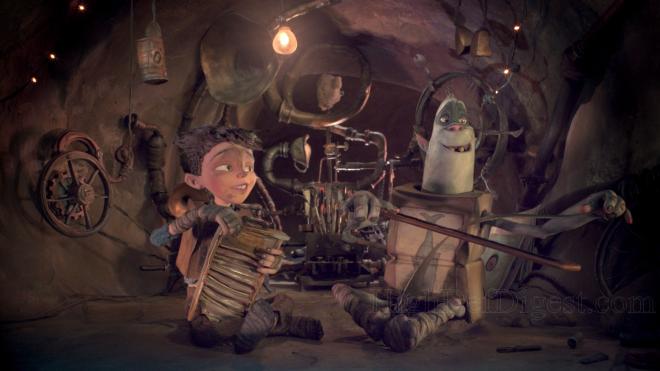 The filmmakers quickly counter this with a cheerful montage showing the baby from earlier, which we later learn is named Eggs (Isaac Hempstead-Wright) after the box that barely covers his upper body, being cared for and loved by presumed monsters. In reality, the boxtrolls are peaceful creatures with an almost environmentally-conscious appetite for recycling garbage and a penchant for fixing or inventing useful things. One cardboard-wearing troll named Fish is the boy's primary caretaker, encouraging and egging on his creative side. After some time, Snatcher's effort begin to take their toll on the troll population, and on one night of scavenging, Eggs is discovered by the mayor's neglected but meddling daughter Winnie (Elle Fanning), leading to some predictable outcomes that thankfully don't ruin the film's overall value. The seriousness behind it all is always kept with a light-hearted appeal and humor, coming mostly from the funny pseudo-philosophical dialogue of Snatcher's henchmen.

Speaking of which, although the menacingly calculating machinations of Snatcher forcing his way through the social hierarchy is mostly responsible for providing the film's darkly solemn tone, parents can rest assure the fantasy adventure ends with a sprightly, cheerful message about the clothing not making the person. Very loosely based on the children's novel Here Be Monsters! by Alan Snow, Adam Pava and Irena Brignull's script clever make this point by giving Snatcher a severe cheese allergy that cause him to repulsively swell. The animation work in these moments and several others is marvelous, arguably superior to the company's previous two efforts, particularly with the brilliantly expressive trolls carrying a great deal of emotion in their faces. Though 'The Boxtrolls' is a tad gloomier and serious, the film delivers with visual wonder and offbeat imagination, captivating the youngest while fascinating parents.

Universal Studios Home Entertainment brings 'The Boxtrolls' to Blu-ray as a two-disc combo pack with an UltraViolet Digital Copy. A Region Free, BD50 disc sits comfortably opposite a DVD-9 copy of the movie. Both are housed inside a standard blue keepcase with a lenticular slipcover. After a few skippable trailers, viewers are taken to an animated screen with the boxtrolls popping out of various spots, the usual selection of menu options and music.

As we'd expect from a Laika stop-motion production, the boxtrolls roam the dark streets and alleys of 3D Blu-ray with a magnificent, first-rate 1080p/MVC MPEG-4 encode that will have viewers believing in this fantasy world.

One of the presentation's better aspects is surprisingly the lack of gimmick shots. Don't get me wrong, a couple action sequences break through the screen with the occasional trick effect, but the real focus and attention is placed on creating a realistic 3D world, which it does admirably. The dark streets of the fictional Cheesebridge penetrate deep into image, forming an awesome sense of depth, an elongated passageway that one can actually feel turns the corner. Separation between buildings and objects is superb while characters have a nice roundness to them — noses in particular protrude and extend from the faces of each character. A few, rather negligible moments are not as impressive as others, but overall, the picture offers a terrific, demo-worthy three-dimensional reality.

Presented in its original 1.85:1 aspect ratio, the video is also razor sharp with excellent detailing in every scene, even those with a thick, hovering fog, of which there are several. The stitching on the clothes is plainly visible; we can make out every thread and seam is precise and evident, allowing viewers to really appreciate the level of work that went into designing this elaborate world. Not only do characters promenade about the screen with believable movement, but each shows distinct wrinkles and deliberate blemishes with lifelike textures, from the faces of older characters to the boxes of trolls. Very fine, discrete lines in the buildings and unique architecture expose some interestingly charming features, from minor imperfections and flaws to individual stones and cracks.

The rest of the video displays a slightly subdued contrast level, which for all intents and purposes we can assume is an intentional creative choice. This gives the film a downcast appeal for a majority of the runtime, and in the final quarter, it is used to complement a larger change in the storyline where suddenly the town is bright and energetic with clean, crisp whites. However, blacks are thankfully not affected by this, filling the screen with inky rich shadows that pierce deep into the image and supplements the already excellent three-dimensional picture. Primaries are vibrant and sumptuous while cleanly-rendered secondary hues provide warmth and vigor to the comedy, making this stop-motion flick an outstanding watch.

On the audio side, the trolls may look better than they sound, but the cute, mischievous creatures living beneath the town nonetheless make quite the ruckus in this splendidly satisfying DTS-HD Master Audio soundtrack. For the most part, this is a front-heavy design, which is both surprising and a tad disappointing given the company's two previous efforts. However, the rears are employed on several occasions, primarily and most notably during action sequences where effects enjoy discrete directionality and excellent panning. Dynamic range is distinct with clean definition of the tiniest object clanging and ringing across a very well-balanced soundstage. The low-end is ample and robust, providing adequate weight and rumble to certain scenes, and dialogue is intelligible with clean intonation in the conversations, making this an excellent lossless mix.

More somber and serious than their previous macabre-inspired efforts, Laika's 'The Boxtrolls' nonetheless enchants and mesmerizes with stunning animation and wonderfully dark but challenging tale adult audiences can appreciate. The 3D Blu-ray arrives with spectacular video and an excellent audio presentation. Bonus section feels a bit light, but the overall package is nevertheless a winner and recommended for the family.

Sale Price 36.5
List Price 49.98
Buy Now
3rd Party 8.4
In Stock.
See what people are saying about this story or others
See Comments in Forum
Previous Next
Pre-Orders
Tomorrow's latest releases