In this unsettling drama from Italian filmmaker Liliana Cavani, a concentration camp survivor (Charlotte Rampling) discovers her former torturer and lover (Dirk Bogarde) working as a porter at a hotel in postwar Vienna. When the couple attempt to re-create their sadomasochistic relationship, his former SS comrades begin to stalk them. Operatic and disturbing, 'The Night Porter' deftly examines the lasting social and psychological effects of the Nazi regime.

Liliana Cavani’s ‘The Night Porter’ is a dark, incendiary journey into perversity and exploitation, one that, at first glance, may seem to have no grander intention than sheer provocation. The tale of a Nazi war criminal and the former wartime object of his abuse and affection, seemingly fated to relive their aberrant relationship over and over again is not exactly your typical boy meets girl love story. It’s not a love story at all. Instead, it’s a boy-meets girl, boy abuses girl in a concentration camp, boy meets girl years later at a hotel in Vienna, boy and girl rekindle their twisted romance and madness ensues.

Dirk Bogarde and Charlotte Rampling star as the unconventional lovers, Max and Lucia, respectively. The film utilizes flashbacks to jump from the present to the pair's excruciating and bawdy WWII encounters. There is little information on either character’s lives prior to the war, which makes the setting of the concentration camp their de facto origin story. And that point is important to understand why, so many years later, the smoldering embers of their passion need only be briefly stoked to erupt once more into flame. The suggestion is that horrible place in their past was the beginning of a new life for them. The people they were before have been ostensibly erased, as the malignant bond formed between them, and the obscenely intense feelings that were unearthed along with it, wind up forming something (someone) new where the old Max and Lucia once were.

For Max, post-war life consists of being the titular night porter at the aforementioned hotel in Vienna. Cavani paints his life as one of clockwork and routine, an existence that borders on the mechanical and runs with cold efficiency. But Max's work in the hotel isn't merely to service the patrons coming and going. The hotel also houses several Nazi war criminals like him, hiding out and occasionally meeting to determine the best way to ensure their survival. The future is what's at stake, and yet these men are all mired in the past. One such resident of the hotel used to dance for Max and his fellow officers in the Third Reich, and now he employs the night porter to light his cramped room so that he may dance once more. 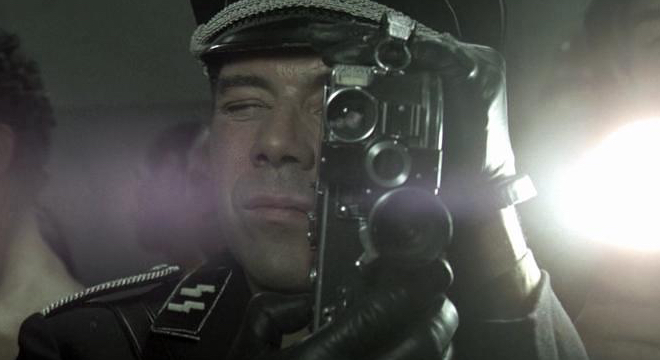 There are talks of trials that hint at the group's fear of being exposed, but they mostly conduct themselves as though capture is not the first thing on their minds. That is until Lucia, traveling with her husband, arrives in Vienna, to stay at Max's hotel quite by chance. Cavani frames the encounter as paramours reunited at last, rather than the abuser and his victim. The reaction alone, one of furtive glances and non-verbal cues suggests that although the roles should have changed – with Lucia now capable of holding Max's very life in her hands – they instead revert back to their former functions. Max's dominant stare once again reduces Lucia to a state of doing anything in order to survive. This time, however, it is not Max who threatens her life, but the cabal of war criminals who threaten them both.

Cavani establishes how caustic that recreation of the past can be, by slowly establishing how this is no mere tryst, but rather the beginning of the next and final chapter in their lives. For Max and Lucia, as well as the secretive surviving members of the Reich, World War II was always meant to be the end, and their survival of it is seen as having condemned them to this recursive existence. The would-be lovers are, in effect, prisoners of their time at war; they are psychologically shattered and corrupted by their experiences of sex and torture – a notion that is exemplified in the film's most indelible image: that of a topless Charlotte Rampling singing and strutting around a smoke-filled room in an SS cap, a pair of leather gloves, and suspenders, all while her Nazi captors look on.

The instance serves as the embodiment of the film's attempt to embrace the abhorrent while simultaneously shaking hands with the lyrical. The moment is potent in its contradiction, spurring Cavani and her cast on to capture and combine as many similar moments as possible. Though none are as ineffaceable as that darkly musical scene, all are served by it in one form or another. Rampling's exposure, coupled with what seems to be her acceptance of her captors and torturer, underline a willingness to do anything in order to survive. As the plot moves on, several years after the war has come to an end, Lucia's entanglement with Max is, on the surface, voluntary, making their reunion another bizarre contradiction whose only key is buried in the inevitable re-creation of the place they first met.

Rampling's Lucia is neither victim nor heroine; she is reduced to a base role as participant – barely uttering a single word in the film's claustrophobic, sadistic third act. The willing submissiveness of her character is undoubtedly a bone of contention for many, one that is made more difficult to reconcile when Bogarde's Max reveals the reason why he works at night: he is ashamed in the light of day. Playing with the audience's sympathies and subverting their emotional response keeps the film and its characters from fitting into any sort of rational system that might otherwise revolve around notions of guilt, truth, and desire. Instead, 'The Night Porter' orbits a sense of repetitive cruelty and poeticism, stressing the elegiac understanding that finding the end is in its own way another permutation of those two elements. 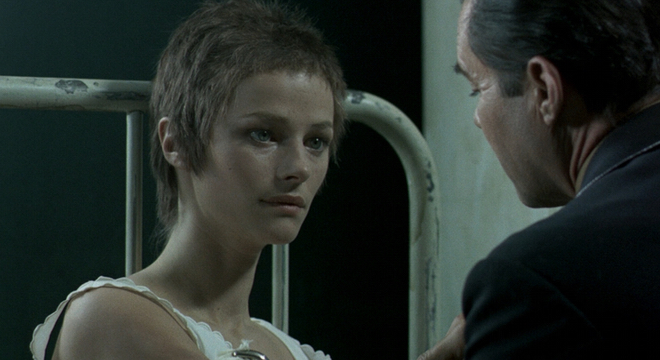 'The Night Porter' comes from Criterion as a single 50GB Blu-ray disc in the standard clear Criterion packaging, with a spine is numbering of 59. Accompanying the disc is a foldout (no booklet, oddly) featuring the standard Criterion specifications on how the image and sound were restored, as well as an essay by Gaetana Marrone, author of 'The Gaze and the Labyrinth: The Cinema of Liliana Cavani.'

'The Night Porter' has been given a new 2K digital restoration that gives the film a surprising level of clarity and vibrancy of color. The image is strong throughout, with plenty of fine detail in nearly every scene. Facial features and clothing textures are pronounced, as are little details in the background, which are accentuated through the image's exceptional depth. Mostly, though, the image benefits from a reduction of the green that permeated the image of past releases. That verdant tint has been toned down and is now imbued with a colder blue that accentuates the tone of the film much better.

Contrast is also quite high, resulting in even white levels and blacks that provide a strong, full-bodied element, cleanly outlining edges for extra clarity and providing deep, rich shadows and, when the occasion calls for it, complete darkness. There's no hint of banding or crush anywhere, giving the darkness of the film's final segment the level of clarity and detail it needs. Meanwhile, color is vibrant throughout, utilizing the aforementioned blue-green tint to make blacks and reds pop in comparison.

The restoration seems to have smoothed the grain and helped limit the appearance of dust and scratches significantly. There is still a charming filmic quality to the image, but the restoration gives it a sheen unlike anything that's been seen before. This is a nice restoration that is an upgrade to what has been a troublesome image in the past.

The LPCM monaural soundtrack sounds very good and is likely more in tune with how the film was originally presented. The absence of a surround track puts the haunting score by Daniele Paris on full display. The music is balanced against dialogue and sound effects quite well, but when it is given the opportunity to be the entire focus of the disc's audio, it truly shines. Although dialogue can be a little tinny at times, it mostly sounds very good. The audio manages to drop the music and other elements imperceptibly to accommodate the heaviest moments, and to make sure they are front and center for the greatest dramatic impact.

There's not much in the way of ambient or atmospheric sound, but certain scenes to convey a sense immersion, as the sound of traffic and the din of a restaurant do emanate from the center channel speaker on occasion. Mostly, though, this is straightforward presentation of a relatively simple audio mix, and the LPCM does a good job making it seem more complex than it really is.

Women of the Resistance (HD, 50 min.) - A documentary made in 1965 by Director Liliana Cavani that investigates a variety of women who participated in the Italian resistance during WWII.

Liliana Cavani (HD, 9 min.) – This new interview with Cavani affords some insight into how she approached the making of the film, and her thoughts on it after so many years. This is an insightful interview that could definitely have been much longer and covered more aspects of the film, but it is intriguing nonetheless.

The level of contemptibility on display in 'The Night Porter' helps to examine the depth of which the Nazi regime negatively impacted society as a whole. By looking at a group of survivors from the Reich, as well as one of its victims, the film imagines how it could be possible that the desire to live could exceed one's own sense of morality. It is a difficult and salacious film at times that is elevated through the exacting performances of Bogarde and Rampling. Although the supplements could have been expanded, the image and the sound are both very good. This one comes recommended.

Sale Price 19.99
List Price 39.95
Buy Now
3rd Party 15.98
In Stock.
See what people are saying about this story or others
See Comments in Forum
Previous Next
Pre-Orders
Tomorrow's latest releases