In this fantastic voyage through time and space from Terry Gilliam, a boy named Kevin (Craig Warnock) escapes his gadget-obsessed parents to join a band of time-traveling dwarves. Armed with a map stolen from the Supreme Being (Ralph Richardson), they plunder treasure from Napoleon (Ian Holm) and Agamemnon (Sean Connery)—but Evil (David Warner) is watching their every move. Featuring a darkly playful script by Gilliam and Monty Python's Michael Palin (who also appears in the film), 'Time Bandits' is at once a giddy fairy tale, a revisionist history lesson, and a satire on technology gone awry.

As clichéd as it may sound, it’s true the imagination of a child is a universe of bountiful amazement and never-ending inventiveness. And this is while the child is awake, in full control of his or her ability to conjure up different things all at once, using (or squandering?) it for their daily entertainment, creating strange worlds that exist only in their minds and only they can see during playtime. Think of the immeasurable possibilities which could be accomplished while asleep. When the power to control it is suddenly gone, imagination is an infinite and limitless landscape of ceaseless, incomprehensible chaos, fueled by material reality into a bizarre, exotic narrative where time doesn't exist. We call them dreams when all goes well, and nightmares when things suddenly go awry.

On the surface, Terry Gilliam's 1981 comedy fantasy, 'Time Bandits,' is essentially a celebration of this beautiful disorder, a wild reverie rejoicing in the madness and frenzy of its own creation. And it's done in such a way as to seem random and haphazard, but the story is terrifically well constructed and planned out. Co-written with Michael Palin, who also stars as Vincent, Gilliam's dark and wry sense of humor is on full display despite the film's attraction to younger audiences. He later took his cynicism to an even darker and more deeply sardonic place with 'Brazil.' It all feels accidental to the characters, but we know it's all by design since there is nothing in the time-traveling adventure that wasn't first alluded to in some clever way at the very beginning.

The journey begins simple enough with 12-year-old Kevin (Craig Warnock) reading a book on Greek warriors. The bright boy is a history buff with a special liking for Ancient Greece. His bedroom is strewn with fantastical drawings and a variety of toys that are later recalled throughout the film. He shuts his eyes for what seems like only a second to him, but we know better. Kevin is about to have the best dream of his life. With a sudden thud and clonk from within his wardrobe, he opens his eyes and discovers six dwarves invading his bedroom. Together, they run from the Supreme Being (Ralph Richardson) and fall into a time portal, where Kevin gets to meet Napoleon (Ian Holm), Robin Hood (John Cleese), and King Agamemnon (Sean Connery) as well as a hungry ogre (Peter Vaughan). 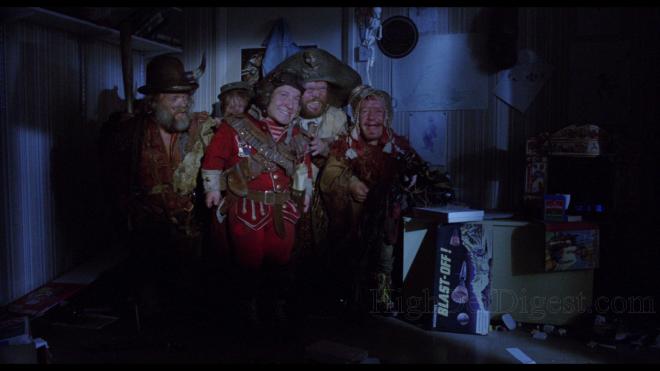 On a deeper level, the film is also a reminder, possibly even a lamentation, of that childlike passion for using our imagination. That we somehow allow to shrivel away with time and maturity as we succumb to the demands of modern society. Looking at it from a contemporary perspective, 'Time Bandits' is a charming commentary — even prophetic in some respects — on consumerism and technology, represented in the words and ambition of the Evil Genius (David Warner). Through Kevin's parents (David Daker and Sheila Fearn) and in the way they ignore his interests, we see that such trivial gadgets take their toll upon individuality and the ability to think for one's self, making people neglect and disregard those things which should matter most.

'Time Bandits' inspires an appreciation for imagination and the act of dreaming through a kind of celebration of childlike wonderment which we tend to lose with age. Clearly, Terry Gilliam hasn't lost it or abandoned it, nor does he ever want to. For two straight hours, he makes us forget we are frumpy, grumpy adults who cart around a bunch of trinkets which are ultimately useless in the grand scheme of things. As one final caption to the film, Gilliam leaves us with a clever question at the end. Considering that Kevin is dreaming, what does it say about the Supreme Being as the object of his dreams? And why leave us with the mystery about the toaster oven?

This Blu-ray edition of Terry Gilliam's 'Time Bandits' comes courtesy of The Criterion Collection (spine #37) on a Region A locked, BD50 disc and housed in their standard clear keepcase. Accompanying the disc is a foldout, poster-size pamphlet that opens into a star-map replica as seen in the movie, and the package comes inside a lenticular slipcover.. On the back, owners will find an insightful essay entitled "Guerrilla Fantasy" by author and film critic David Sterritt. There are no trailers or promos before being greeted by the distributor's normal static menu screen and options.

Compared to the previous Blu-ray from 2010, this Criterion edition of 'Time Bandits' is a massive improvement, showing a highly-detailed and stable 1080p/AVC MPEG-4 encode. According to the accompanying pamphlet, the original camera negatives were used and scanned at 2K resolution, with restoration efforts done by the folks at Arrow Video, to create this awesome digital transfer, and the entire process was supervised by Terry Gilliam himself. Close-ups of the cast are revealing, exposing every pore, wrinkle and negligible blemish, while the rest of the presentation shows clean, distinct lines in clothing, surrounding foliage and various buildings. Of course, several sequences are slightly softer than others, but they're likely due to the age and condition of the elements.

Presented in its original 1.85:1 aspect ratio, the image comes with excellent contrast and crisp, brilliant whites, allowing for lots of visibly sharp details in the far distance. Black levels are also superbly well-balanced and opulent with strong shadow delineation, giving several moments a noticeable and lovely three-dimensional quality. Primaries are accurately saturated and true to life while cleanly-rendered secondary hues provide warmth, giving the picture lots of energy and pop. With a thin layer of natural grain throughout, providing an appreciable film-like appeal, this high-def transfer is a beautiful representation of a Gilliam favorite.

Like the video, Criterion went back to the original source for creating the audio on this Blu-ray. The uncompressed PCM stereo soundtrack was remastered from the original 35mm magnetic track, and the results are, not surprisingly, a notable improvement to the previous release. Imaging is wide and broad with lots of convincing movement and superb balance between the front channels. Background activity is clearly audible with excellent acoustical details and sharp, outstanding definition in the mid-range. Bass is adequate, as expected for a film of this vintage, but appreciably hearty to provide the music of Mike Moran and action sequences with a great deal of presence. With intelligible, crystal-clear vocals in the center, this makes for an excellent lossless mix fans will love.

Terry Gilliam's 'Time Bandits' is a wonderful and imaginative film about a small boy's adventure through time and space. It's a skillfully made 80s fantasy that works as a clever commentary on consumerism and technology with Ian Holm, John Cleese and Sean Connery. The Blu-ray from The Criterion Collection arrives with a notable audio and video improvement over the previous release, which fans will surely appreciate. Along with a healthy and entertaining assortment of supplements, the overall package comes very much recommended!

Sale Price 19.99
List Price 39.95
Buy Now
3rd Party 15.99
In Stock.
See what people are saying about this story or others
See Comments in Forum
Previous Next
Pre-Orders
Tomorrow's latest releases