Planes: Fire & Rescue tells the tale of a dynamic crew of elite firefighting aircraft devoted to protecting historic Piston Peak National Park from raging wildfire. When world-famous air racer Dusty (Dane Cook) learns that his engine is damaged and he may never race again, he must shift gears and launch into the world of aerial firefighting. Dusty joins forces with veteran fire-and-rescue helicopter Blade Ranger (Ed Harris) and his courageous team, including spirited air tanker Dipper (Julie Bowen), heavy-lift helicopter Windlifter (Wes Studi), ex-military transport Cabbie (Dale Dye) and a lively bunch of brave all-terrain vehicles known as The Smokejumpers. Together, the fearless team battles a massive wildfire and Dusty learns what it takes to become a true hero.

'Planes: Fire & Rescue' successfully pulls off one of the trickiest maneuvers in cinema — and no, it's not just the fact that the first movie turned enough of a profit to warrant another installment. This little sequel to a DisneyToon feature originally planned as a spin-off within Pixar's 'Cars' universe effectively surpasses and improves upon its predecessor, accomplishing a feat rarely seen. Of course, some would argue the first was satisfying enough, especially when taking into consideration its target audience, which is fair but only to certain extent. The underdog story of a hapless dreamer aspiring for greatness has been told before and much, much better, even for those meant for the youngest amongst us. Frankly, Dusty Crophooper's struggle to qualify and win a challenging race is not only predictable, but it fails to truly engage and pull viewers into Dusty's dilemma, masking the shortcoming with lots of fancy, flying visuals.

From a script by Jeffrey M. Howard, who also co-wrote the first entry, and Roberts Gannaway, who also serves as director, the sequel is a significant improvement primarily because the story is stronger, more engaging and is more of the film's focal point. That's not to say the pretty CG graphics and images are suddenly pushed to the backstage because they remain quite prevalent and are absolutely stunning. In fact, I might even suggest that this aspect of the production has probably also received an upgrade and thankfully, serves to enhance the plot rather than distract from any inadequacies. The wildfire raging through the forest during the last of the second half moves and sways with spectacular realism and splendid, often jaw-dropping beauty. The action is surprisingly gripping, almost a bit too scary and suspenseful for little tykes, but it'll leave parents mesmerized and perfectly content enjoying the film as a family. 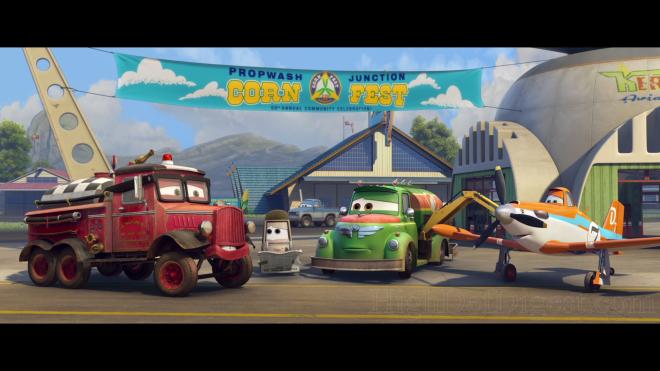 Amazingly, and what makes much of the movie an entertaining watch, the thrill of seeing firefighters battle the rapid, burning intensity of flames is ultimately second to a tale about sacrifice, bravery and heroism. The movie opens with Dusty (once again voiced by Dane Cook), now a successful, world-renowned career racer, damaging an irreplaceable gearbox while training, providing an emotional tenor and crux that's rather mature for a kid's flick. Feeling his aspirations are suddenly brought to a halt, the former crop-duster's frustration is the cause of a fire accident that forces government official to condemn the airport for failing regulations. It's a surprisingly elaborate and unexpected setup in the vein of other, more sophisticated Pixar features. The chain of events leads to the character's sense of guilt and wounded ego, as well as a desire to correct wrongs by sacrificing his dreams to save the airfield by becoming a firefighter.

While training for his certification, we're introduced to a terrifically funny bunch making up the fire and rescue crew, starting with the stereotypically grumpy commander Blade Ranger, an irritable veteran police helicopter voiced by Ed Harris who hilariously was once a famous TV star. Lil' Dipper (voiced by Julie Bowen) is a star-struck Super Scooper, a spirited and bubbling aircraft that piles on the charm and laughter with several moments of infatuation that borders on obsessively delusional. Windlifter (voiced by Wes Studi) is a heavy-lift helicopter that continues the appeal with oft-confusing words of wisdom while the spunky Smokejumpers (Regina King, Corri English, Bryan Callen, Danny Pardo and Matt L. Jones) captivate with silly cartoonish energy. With dazzling, sensational action sequences that'll have the whole family bracing their seats, 'Planes: Fire & Rescue' is a terrifically entertaining follow-up — superior, in fact, to its predecessor — with spectacular CG visuals and an engaging story.

Walt Disney Studios Home Entertainment brings 'Planes: Fire & Rescue' to Blu-ray as a two-disc combo pack with a code for a Digital Copy. The Region Free, BD50 disc sits comfortably on the panel opposite a DVD-9 copy with a lightly embossed, glossy slipcover. At startup, the disc commences with skippable trailers before switching to a menu screen with the standard options, music and full-motion clips.

The animated sequel flies into action with a superbly clean, reference quality 1080p/AVC MPEG-4 encode that soars unto the screen with a vibrant array of colors. Sumptuous primaries energize every scene, from the bright reds of Mayday's fire truck and Blade Ranger's chopper to the greens in the forest and Windlifter's skycrane helicopter. The sky is a brilliant, true-to-life blue, making every exterior wide shot into a beautiful, postcard-like panoramic photo. Warm secondary hues are stunningly clean and accurately-rendered, strengthening and invigorating the already captivating presentation with gorgeous yellows and oranges that make the wildfire realistic while giving the browns of the lodge a relaxed, lived-in feel.

Presented in its original 2.40:1 aspect ratio, the frame also displays spot-on contrast, allowing for perfect visibility into the far distance, which offers the viewer the opportunity to truly appreciate the work and artistry that went into creating this CG world. Black levels are richly-saturated and luxurious with deep, penetrating shadows that never falter or obscure the finer details, providing the image with welcomed dimensionality and clarity throughout. Definition and resolution is top-notch with so much for the eyes to take in. Granted, a couple very minor and negligible moments of mild banding and aliasing can be noticed by the keenest of eyes, but overall, the tiniest little detail is exposed and sharp, fine lines are distinct. From the rust stains on Mayday to the way the fire moves, the high-def picture of this sequel will not fail to surprise viewers.

On the audio side, the fire and rescue crew battle another sort of fire with an excellent DTS-HD Master Audio soundtrack. Though not quite as impressive or equal to the video, it nonetheless offers an outstanding presentation of its abilities, which does its job adequately and with enough pizzazz to be memorable.

From the start, Mark Mancina's music fills the room with an engaging, emotional tenor that reveals sharp detailing and clarity in the mid-range. Later action scenes remain remarkably well-defined, as every crackle and hiss in the fire is distinctly heard. As the planes, helicopters and the roar of the fire blasts with intensity and lifelike weight in the low-end, the rears come alive with exceptional directionality and fluid panning effects, creating a wonderfully immersive soundfield. Sadly, this is sorely missed during quieter scenes when suddenly surrounds go silent and fail to provide the ambience of wildlife. Nevertheless, with crisp, intelligible vocals in the center, this lossless mix is a terrifically entertaining listen.

With dazzling, sensational action sequences that'll have the whole family bracing their seats, 'Planes: Fire & Rescue' is a terrifically entertaining follow-up — superior, in fact, to its predecessor — with spectacular CG visuals and an engaging story. The Blu-ray arrives with exceptional, reference-quality video and an excellent audio presentation to match. Supplements are on the weak side, but the overall package is sure to please fans and the little tykes wanting some kid-friendly firefighting action.

Sale Price 10
List Price 26.5
Buy Now
3rd Party 2.13
In Stock.
See what people are saying about this story or others
See Comments in Forum
Previous Next
Pre-Orders
Tomorrow's latest releases