'Are You Here,' the feature-film directorial debut of 'Mad Men' creator Matthew Weiner is not the complete disaster some have been saying it is. It is also not anything like what those familiar with his work were likely expecting.

Weiner's deft touch, his tendency to favor the lyrical, to rely heavily on subtlety and nuance to render his characters and their often very complex emotions more authentic, has largely been his calling card since Don Draper first came home to the wife and family he seemed completely detached from in the final moments of 'Smoke Gets in Your Eyes.' Those qualities have been a consistent feature of 'Mad Men' through its now six-and-a-half seasons. They are also prevalent enough that they have, more or less, become a part of Weiner's continually evolving style – which is no easy feat on a show that takes place over the course of a decade as socially and culturally defining as the '60s.

What is striking about 'Are You Here,' then, is that very little of what has come to be thought of as Weiner's strong suits winds up being seen on-screen. Instead, the story of an unlikely friendship between two not very likeable adults (played by Owen Wilson and Zach Galifianakis), being tested by the sudden death of Galifianakis' father, tends to aim more for the sort of sitcom-y humor of Weiner's pre-'Sopranos' job on the Ted Danson-led 'Becker.' 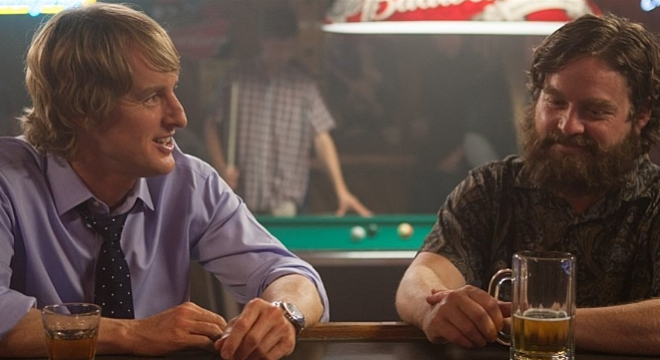 That's not to say such attempts at humor are out of place in a Matthew Weiner script, because they're not. 'The Sopranos' and 'Mad Men' are often funnier that even the most joke-filled sitcom. But that is largely because of the way the humor is used in contrast to the weightiness of the show's atmosphere. It's also because drama writers often times seem like they're better at writing comedy than most comedy writers are. There's a freedom in knowing that, in a drama, if a joke doesn’t land, it can just be viewed as a deliberate bit of awkwardness in an otherwise serious moment, whereas comedies live and die by the consistency of their humor.

'Are You Here' begins with a series of rapid-fire encounters, detailing Owen Wilson's small-market weatherman, Steve Dallas, as a semi-successful, womanizer who lives his life so far ahead of his next paycheck, he's perpetually broke. After having his credit card declined by an escort, Dallas crashes on the couch of his mentally unstable best friend, Ben Baker (Galifianakis). Ben's instability is detailed as much through the unkempt setting of his off-the-grid lifestyle as it is the lengthy time-lapse of him drinking, smoking pot, writing, and tending to the pot that he's growing in a closet – all while Dallas snoozes on his couch.

Both men are caught in a rut they are either unaware of, or they simply have no idea how to escape from. Steve can't stop the cycle of juvenile, self-destructive behavior, while Ben is clearly in need of some therapy and potent mood stabilizers.

When news comes of Ben's father's off-screen death, the two travel to the farm Ben grew up on with his sister Teri (played by the brilliant Amy Poehler), to attend the funeral and (naturally) proceed with the always funny and engaging trope of watching siblings squabble over the particulars of their parent's last will and testament. In this case, the uptight Teri is taken aback by the announcement that the farm, as well as their father's semi-successful grocery store has been bequeathed to the underachieving, mentally unstable Ben.

To make matters worse, Ben and Teri's father married a much younger woman (Laura Ramsey), whose vaguely bohemian air is apparently just what the doctor ordered to cure what ails Steve and Ben.

To the film's credit, Weiner manages to keep the pace lively. This is likely due to the extra round of edits that took place after the film's initial screening at the 2013 Toronto Film Festival – which also ushered in a title change from 'You Are Here' to the suspiciously question mark-less 'Are You Here' that allegedly was done in order to improve its VOD results. And yet, despite the valiant efforts of the script and the actors to keep the film funny, dark, and yet poignant – the film's final shot is somewhat opaque, but intriguingly so – 'Are You Here' never really comes together in the end.

Much of the problem is in the casting. Whatever Wilson's talents are as an actor – especially a comedic one – they don't seem to mesh well with Weiner's particular brand of dialogue. Wilson often sounds as though he's reading from a cue card, like this was the first time he'd seen the script or that his role was to test out whether or not the dialogue had the rhythm and cadence of normal human speech. Often times, coming from Wilson's mouth, winds up falling short.

Furthermore, perhaps because Wilson's on-screen persona has recently morphed into a variation on Vince Vaughn's brand of unlikable but compassionate protagonists, it's difficult to empathize with Steve Dallas, even though the third act works admirably to encourage the audience to do so.

And that, along with the film's tonal inconsistencies and reliance on archetypes make the film not so much a disaster, but more of an interesting yet unsuccessful experiment in a medium that is dramatically different from where Weiner seems to so easily excel. 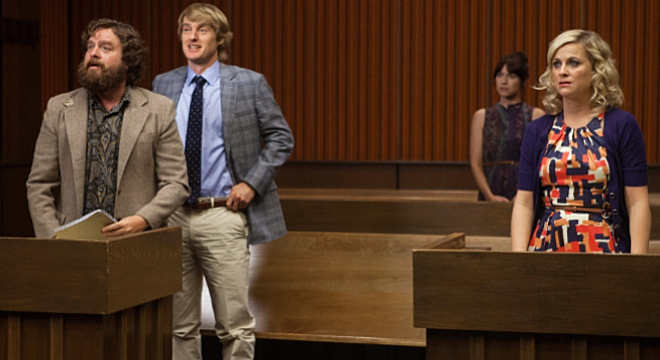 'Are You Here' comes from Millennium Entertainment as a single 25GB Blu-ray disc in the standard keepcase. The disc includes a handful of previews ahead of the top menu, a Dolby TrueHD 5.1 or Dolby Digital 2.0 audio mix, and director's commentary.

With its 1080p AVC/MPEG-4 encoded transfer, 'Are You Here' looks good on a technical level – the image is clear, with well-defined edges, robust detail throughout, and solid textures. Despite all of this, the film occasionally feels flat and sometimes a little sterile.

Again, fine detail is high throughout. There is an abundance of fine features that stand out in even the most mundane shots, facial features especially. Clothing shows nice texture and background elements look pleasant and detailed when need be. Contrast is also high. Blacks are full-bodied from start to finish, while the whites are warm without running too hot or looking blown out. There is no evidence of crush or banding anywhere in the film. Colors generally look bright. Greens and reds tend to jump off the screen without being over saturated. Flesh tones are even throughout, rendering everything lifelike and pleasingly healthy.

Overall, the transfer manages to use its fine detail and bright, crisp colors to the film's advantage. There are a few instances where lighting tends to deliver an image lacking proper depth and appearing overly sterile.

The Dolby TrueHD 5.1 mix offers fairly standard audio that, while serviceable in most aspects, can sometimes favor sound effects and music over the dialogue. This is particularly a problem, as 'Are You Here' is very much a dialogue-driven film. For the most part, dialogue already sounds a little lower than it should be, and the imbalance between sound effects and actors talking results in the mix being too loud in some places or too soft in others.

Otherwise, the mix sounds robust and delivers supple music cues from 'Mad Men's David Carbonara, as well as subtle but effective atmospheric effects that enhance the feel of certain settings. Rear channels do a great deal of work in regard to creating an immersive experience. The sounds of the city versus an upstate farm are drastically different and work to accentuate the use of locales to the film's benefit. There are a few instances where LFE comes into play, and it, too, is subtle and allowed to accentuate the scene, rather than dominate it.

Were it not for the issue with the dialogue, this would a terrific sounding mix. As it is, this one is just above average.

Director's Commentary – For those accustomed to Weiner's commentaries on the 'Mad Men' episodes (except for season 6), 'Are You Here' is no different. Weiner gives a thoughtful commentary discussing his thoughts on everything from the actors to the setting to what he was trying to say with the film.

According to Weiner, 'Are You Here' is intended to be about 'the myth of male friendship.' And while it certainly explores the facets of male friendship – especially with the line about friendship being harder than romantic love because there's nothing in it for either person – the film often gets distracted with unnecessary story threads and details. Laura Ramsey's Angela Baker character feels superfluous for the most part, while the exciting dynamic between Galifianakis and Poehler tends to go overlooked. Still, it is a Matthew Weiner film, and even if it doesn't work, there's still something worth seeing. With good image and decent audio, this would make for a fine rental.

Sale Price 8.74
Buy Now
3rd Party 3.53
In Stock.
See what people are saying about this story or others
See Comments in Forum
Previous Next
Pre-Orders
Tomorrow's latest releases