God Told Me To

A rooftop sniper guns down 14 pedestrians on the streets of New York City. A mild-mannered dad takes a shotgun and blows away his wife and children. A cop goes on a sudden shooting spree at the St. Patrick's Day Parade. And each of these unlikely killers makes the same dying confession: "God told me to."

Now a repressed Catholic NYPD detective must uncover a netherworld of deranged faith, alien insemination and his own unholy connection to a homicidal messiah with a perverse plan for the soul of mankind. This is the critically acclaimed cult classic written, produced and directed by Larry Cohen that remains one of the most disturbing and though-provoking horror films of our time: God Told Me To.

Of all Larry Cohen's directorial efforts, which span three decades of wonderfully diverting low-budget schlock, 'God Me Told To' is arguably his most ambitious and thought-provoking. The B-movie auteur fascinates with interesting ideas and notions of modernity and the wide cultural state of apathy which few dare to grapple but does so in the guise of entertainment veiled beneath familiar genre conventions. We can see this careful balancing act — that he possess a quirky talent and offbeat knack for it — in his other features, such as the environmentally-concerned 'It's Alive' and the consumer-driven satire 'The Stuff.' Cohen's films are by no means pieces of art — or even artfully done with skill if we're going to be honest about it. Of the three mentioned here, often considered his best known, his work is frankly shoddy and slapdash. But what Cohen lacks in craftsmanship and technique, he more than makes up for with challenging concepts that surprisingly dig deep into the ethos of American society.

And again, this isn't to suggest some mind-blowing point meant to encourage those unfamiliar with Cohen or that his work conceals some sort of genius madman at the helm. Rather, the native New York filmmaker, who majored in film studies at City College, simply aspired to create and tell worthwhile stories, following a childhood dream of making movies inspired by weekly theaters visits to watch the latest detective crime picture. This is evident in several of his movies with characters driven, sometimes with a maddeningly fierce obsession, to solve a mystery often shrouded by a pattern connecting various murders. Here, that motivated individual is NYPD detective Peter Nicholas (Tony LoBianco) fixated with learning the motives behind a seemingly-unrelated string of mass public shootings. Beyond plot contrivances, Cohen also shows his love for classic films with a few creative moments, most notably the scene when Nicholas enters a pool hall and the actor's face is covered in dark shadows save for his large, glaring eyes. 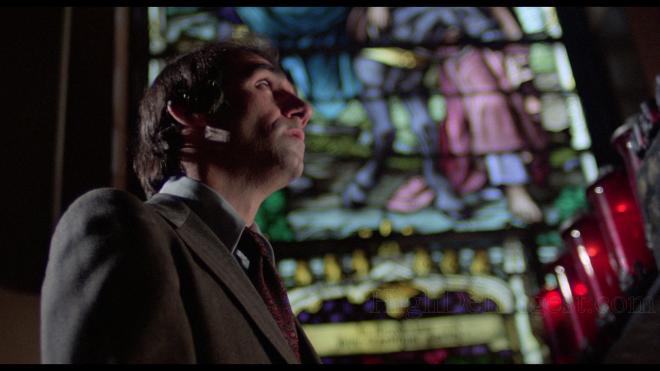 The central mystery surrounding the murders, the answer at the heart of what is possessing otherwise normal people to commit homicide, is each killer proclaiming that God told them to do it. That alone is a disturbing thought because how does one combat a supernatural being with omnipotent powers which override an individual's will to question such commands. At the same time, the concept is complete nonsense. And, for the most part, it is, but Cohen only sustains that notion for a while before pulling the rug from underneath the audience and turning what we thought was a crime horror flick into pure science fiction. The switch is not as disorienting as we'd expect. In fact, it's surprisingly well done and flows smoothly since it all connects back to the protagonist, a lifelong Catholic in the middle of a divorce, dealing with his own personal issues of indifference. Without spoiling the twist and given away the person behind it all, Det. Nicholas's quest to find the real assailant becomes a journey of self-discovery, to learn his purpose and either accept it or reject it.

The crime-detective genre is already ripe with notions of the sociopolitical order, a type of storytelling that exposes the dark underbelly of modern civilization, giving audiences a glimpse into a world hidden in the outskirts of society like a reminder of the necessity of law and justice. By throwing horror, with its themes of our fear of bodily harm whether physical or psychological, and sci-fi, with its usual philosophical ruminations on humanity, into the mix, Larry Cohen creates a bizarrely entertaining film-noir hybrid in 'God Told Me To.' Although he doesn't push his ideas further than just clever thoughts, he nonetheless establishes the opportunity to existentially question the belief of a supernatural being, especially one that would ask its followers to commit murder. A couple characters even outright make references to Biblical stories in defense of their actions, and one of those two, we're curiously told, is now a former atheist. This isn't groundbreaking filmmaking, but Cohen was touching on some interesting ideas in this 1976 production, which has grown to become a cult favorite.

Blue Underground brings Larry Cohen's 'God Told Me To' to Blu-ray on a Region Free, BD50 disc housed in the standard blue keepcase. At startup, the disc goes straight to the usual selection of menu options with full-motion clips and music playing in the background.

Larry Cohen's cult sci-fi horror favorite is a revelation on Blu-ray, a massive improvement over previous home video editions. Sourced from the original negatives and scanned at 4k resolution, the 1080p/AVC MPEG-4 encode is shockingly detailed with sharp, well-defined lines along buildings and city streets. Facial complexions are highly revealing with excellent lifelike textures during close-ups, exposing pores and minor blemishes, and with crisp, comfortably bright contrast, lettering on billboards and books is distinct.

The presentation has its share of soft spots and showing a bit of wear and tear, but, for the most part, the quality is surprisingly beautiful for a low-budget 40-year-old production. Blacks are deep and opulent, providing the video with a welcomed three-dimensional feel while color are clean and accurately rendered. Awash with a thin layer of grain throughout, a fan should be more than happy.

'God' speaks and demands obedience through three listening options, two of which are brand-new lossless tracks while the third is a strong legacy Dolby Digital mix. Although the original mono design is included in the package, and quite good, I found myself really enjoying and slightly favoring the 7.1 DTS-HD Master Audio soundtrack. Rear activity is often alive with the bustling, hectic and energetic noise of the city, creating a satisfying soundfield. Occasionally, a few effects move from front to back and behind with fluid, flawless panning.

The front soundstage is engagingly wide and broad with excellent separation and balance between the channels while dynamic range exhibits outstanding clarity and detail, especially in Frank Cordell's musical score. Although bass is nothing noteworthy, it is nonetheless adequate, and dialogue is very well-prioritized and crystal-clear in the center.

By throwing horror, with its themes of our fear to bodily harm whether physical or psychological, and sci-fi, with its usual philosophical ruminations on humanity, into the mix, Larry Cohen creates a bizarrely entertaining film-noir hybrid in 'God Told Me To.' The B-movie auteur fascinates with interesting ideas and notions about modernity and the wide cultural state of apathy with which few dare to grapple, but does so in the guise of entertainment veiled beneath familiar genre conventions. The Blu-ray from Blue Underground arrives with a stunningly exceptional audio and video presentation. With a decently healthy assortment of supplements, the overall package makes a splendid addition to the cult collection.

Sale Price 26.99
Buy Now
3rd Party 18.86
In Stock.
See what people are saying about this story or others
See Comments in Forum
Previous Next
Pre-Orders
Tomorrow's latest releases