A Most Wanted Man

German intelligence agent Günther Bachmann (Philip Seymour Hoffman) must race against time to solve a perilous mystery: Is the half-Chechen, half-Russian Muslim who's surfaced in Hamburg a victim seeking refuge...or a terrorist seeking revenge? Hoffman's mesmerizing turn as Bachmann will glue you to your seat until the final, shattering conclusion of this John le Carré thriller.

There is absolutely nothing wrong with the idea of Philip Seymour Hoffman taking a lead role in the new film based on a novel by acclaimed spymaster John le Carré. In fact, the idea of it simply feels right, as though it was a universal fact, a thing that just always was, rather than an inspired bit of film casting. Of course, despite the perfectness of these two worlds coming together, the release of 'A Most Wanted Man' was instead to be remembered as one of the last films to star the acclaimed actor. That distinction resonates throughout the film not only because Hoffman delivers a tremendous and weighted performance as beleaguered German spy Günther Bachman, but also because the film reflects the melancholy and sense of loss in such a particular way.

Directed by Anton Corbijn, 'A Most Wanted Man' does for spy movies what the director's previous effort, 'The American,' did for assassins. In their own way, both films are about the personal isolation that comes from engaging in such a particular profession. The idea of "it's just business" is at the heart of Corbijn's work, making his stories fascinating examples of how a vocation can gradually wear a person down to the point they know nothing else about themselves.

Despite it's classification as a spy film, this is really a workplace drama, one where the tedium of pushing paper is as pronounced as any other bureaucratic environment where red tape and backchannels become the greatest challenge of all. And Corbijn is very interested in what makes this particular workplace tick, which he examines by turning the seemingly endless minutia of Bachman's team tracking a potential Chechen terrorist into a more exhaustive and dangerous challenge than fighting a rogue agent atop a speeding train. Tedium is the enemy, and in le Carré's work, only the strongest minds have the tools to overcome it – usually at great personal cost. 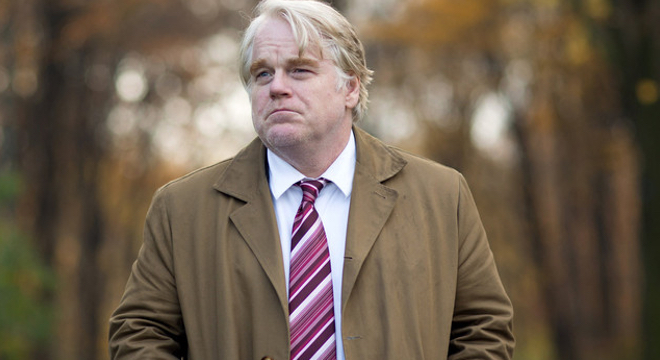 From the first moment he appears on screen, Hoffman delivers a performance that is as potently physical as any he's ever given. He looks perpetually winded, like he just ran a half marathon in his work clothes. Cigarettes and booze aren't a vice; they're Bachman's lifelines. One early moment has Günter rise from bed only to take a hearty drink of booze before he can take the next step. This isn't a moment of want; it's a moment of absolute need. But Bachman isn't some slovenly drunk; he's haunted in a way that he can never explain to those around him, regardless of whether or not they've been there, too. It's a quiet performance, one where Bachman's economy of words speaks volumes about the compromises he's had to make and the disappointments he's been forced to endure.

'A Most Wanted Man' may be driven primarily by the strength of Hoffman's performance, but the film does not rest entirely on his very capable shoulders. Strong performances from Rachel McAdams, Willem Dafoe, Nina Hoss, and a small but memorable turn by Daniel Brühl ('Rush') deliver a rounded ensemble that keeps the spycraft engaging, as it centers on the mystery of Issa Karpov (Gregoriy Dobrygin), a Muslim Chechen and refuge whose arrival in Hamburg raises an a number of international alarms. The mystery of Karpov's arrival in Germany is deepened when he makes contact with Annabel Richter (McAdams), a human rights lawyer who facilitates his interaction with a private banker named Tommy Brue (Dafoe), to collect on an inheritance left by his estranged father, a Russian military official with a checkered past.

Karpov makes up the majority of the A plot, but like any good le Carré story, there is a B and C plot swirling in the background, ready to complicate an already intricate and thorny situation. All of this is set against the backdrop of a post-9/11 world, in which the borders between nations have become the new frontline in the War on Terror and the U.S. intelligence service looms over everything like a storm cloud on the horizon. And here, that looming storm cloud manifests in the guise of the razor-sharp Martha Sullivan (played by a raven-haired Robin Wright).

What sets 'A Most Wanted Man' apart from other spy offerings is its deliberate pace and its focus on character over bombast. Like its central protagonist, the story is more concerned with playing the long game, and in that sense, both Günther and the narrative feel refreshingly atypical from what Hollywood has come to define as a "spy" and a "spy movie." The film is free from the typical action set pieces one would expect from such a thriller, and yet it still qualifies as one. Aside from a brief chase sequence through the streets of Hamburg, and an even shorter confrontation that turns physical, the film relies entirely on the frightening implications of the politics at play and the increasingly dark emotional state of its characters, in order to remain compelling. In the end, Corbijn's efforts carry with them a palpable weariness that builds to a furious howl that, tragic as it may seem, is destined to fall on the ears of those no longer interested in listening. 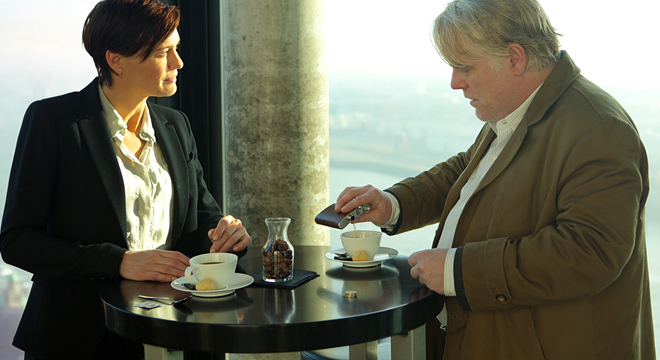 'A Most Wanted Man' comes from Lionsgate as a single 50GB Blu-ray disc in the standard keepcase, which is housed inside a cardboard sleeve. There are a handful of previews before the top menu that have to be fast forwarded through, as they cannot be skipped nor can the user jump directly to the top menu. Additionally, the disc blocks the user from skipping over anything branded with Lionsgate, which makes stopping and starting the film something that will test most viewers' patience.

'A Most Wanted Man' has been given a great looking 1080p AVC/MPEG-4 encoded transfer. The image is filled with fine detail from start to finish. Facial features are all incredibly detailed, with a good amount of focus being given to things like facial hair and small lines that really play up some of the weariness in Hoffman's character. Fine textures are also present in clothing and background elements, giving the image a lived-in quality that also highlights the industrial beauty of Hamburg.

Contrast remains high throughout, especially during the many nighttime sequences. Black levels deliver a full-bodied product that is deep and inky when need be, while maintaining a high level of shadow delineation throughout. Whites are a lower priority, but scenes that deliver a certain amount of brightness manage to come through without looking too hot or blown out. The same can be said for color, which is rather muted for the most part, but seemingly deliberately so. This is a film that depicts the cold reality of international intelligence through a reflection of drab grays and muted earth tones.

There are a few instances where the color reads as too muted, or the focus could be a little sharper, but overall, this is a very crisp, clean image that delivers the film in a way that will look great on a home theater system.

The film's DTS-HD Master Audio 5.1 mix delivers a sharp, detailed listening experience that plays up its reliance on dialogue by making it priority number one. This is a benefit to listeners, as most of the actors put on a German accent with varying degrees of success. This can make it difficult to discern what they are trying to get across, and with so much of the film tied up in info dumps and expository dialogue, being able to focus on what's being said, even when music or sound effects are added to the mix, is paramount.

In that regard, music and sound effects are presented beautifully here. Both are delivered through the front right and left channels, with smaller, atmospheric elements shuffled through the rear speakers. Occasionally – and especially during chase sequences, or moments out on busy streets – the rear channels work to develop a strong sense of atmosphere and to develop a surprisingly taut sense of imaging and directionality. Both of which work very well. Small details never seem to be overlooked, as a shot of a shipping lane is filled with as much atmospheric information as a busy train car, or bustling city street.

Overall, this is a seemingly quiet film that has a lot going on sound-wise, and this mix delivers it all quite well.

The Making of a Most Wanted Man (HD, 16 min.) – This is an interview with the cast and crew that features Philip Seymour Hoffman and director Anton Corbijn. Mostly, the information here is pretty standard, but Hoffman's interview may be of some value to fans.

Spy Master: John le Carré in Hamburg (HD, 10 min.) – An interview with le Carré, in which he discusses his time as a spy in Hamburg and what role the city plays in terms of the novel and, certainly, 9/11. Carré goes into his concerns with how intelligence is gathered and whether or not people are giving up their freedoms in order to feel safer from terrorism.

'A Most Wanted Man' isn't your typical spy-thriller, though it feels like the kind of spycraft it engages in is far closer to the real thing. In dealing with the tedium of intelligence gathering, the movie delivers an oddly compelling glimpse at a profession that seems to result in substance abuse and extreme isolation. For those reasons and for a tremendous final starring role by Philip Seymour Hoffman, this film comes recommended.

Sale Price 27.82
Buy Now
3rd Party 17.5
In Stock.
See what people are saying about this story or others
See Comments in Forum
Previous Next
Pre-Orders
Tomorrow's latest releases