While on a cross-country drive, a bitter writer (International superstar Franco Nero of Django) and his beautiful wife (the stunning Corinne Clery of The Story Of O and Moonraker) pick up a stranded motorist (the one and only David Hess of Last House On The Left infamy). But when this hitcher turns out to be a depraved psychopath, their road trip takes a vicious detour into sex and savagery where the miles are marked in mayhem and vengeance is the ultimate rule of thumb.

Barely released theatrically in America, Hitch-Hike has been called "one of the greatest exploitation films no one has ever seen." Co-writer/director Pasquale Festa Campanile (director of When Women Had Tails and an Oscar nominee for writing The Four Days Of Naples) packs this outstanding sleaze epic with wild performances, extreme violence and some very nasty surprises, all set to a remarkable score by Ennio Morricone (Bird With The Crystal Plumage).

One of the aspects of the horror genre that I love the most are the themes revolving around the loss of innocence. This could be personal innocence as if someone is being exposed to a darker side of the world for the first time. It could be sexual innocence. it could even be the innocence that comes from being a basic decent human being - how stopping to help someone who appears to be in genuine need can lead to the worst nightmare you could ever expect to experience. Pasquale Festa Campanile's 1977 film 'Hitch-Hike' starring Franco Nero, Corinne Cléry, and the late great David Hess celebrates this loss of innocence as a couple on vacation decides to help a seemingly innocent guy stranded on the side of the road who then turns out to be a murderous madman.

Walter Mancini (Franco Nero) and his beautiful young wife Eve (Corinne Cléry) are on a working vacation traveling across California. Walter is a reporter who is balancing work with a bit of hunting while also trying to find a way to fix his dying marriage to Eve. The two simply aren't in love with each other. There is a physical attraction there, but their sex life has lost any personality or meaning and has become an act of carnal desire and pleasure. The pair stops to party at some campsites along their journey and are reminded again and again that their relationship just doesn't work anymore.

As they're about to make their long journey home, Walter and Eve drive up alongside a stranded motorist named Adam (David Hess). Adam's car has broken down and he needs to make it to San Diego to start grad school - so acting as the good friendly people they try to be, Walter and Eve pick him up. He doesn't take up much space. In fact, Adam's large and heavy-looking suitcase takes up more room. When Walter sees Adam eying Eve, his temper gets the best of him. After hitting Adam and attempting to throw him out of the car, Adam reveals himself to be a murderous bank robber. With a fully loaded .45, Adam holds the pair hostage. With over $2,000,000 in the bag, Adam is not only on the run from the police, but the two partners he double crossed. If Walter and Eve are going to survive the rest of their trip, they're going to have to find a way to outsmart Adam - which proves difficult with a suitcase of cash just waiting to be taken ensuring that their captor remains on high alert. 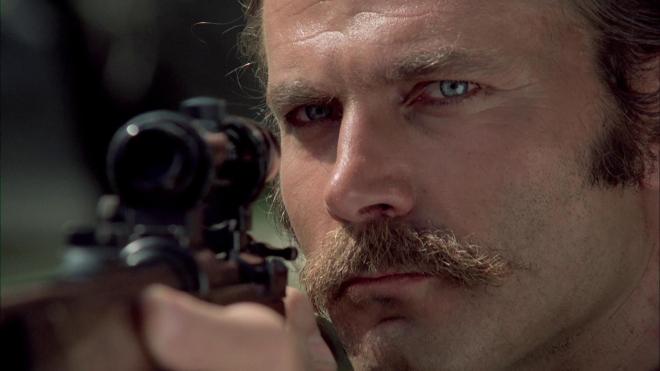 'Hitch-Hike' is a rough and tough horror/thriller that puts the audience right in the center of the action. While we may not feel like Walter and Eve are in a healthy relationship, the very presence of Adam introduces an edge of menace and violence that their relationship. From the opening shot of Walter staring down the scope of his hunting rifle at his wife, we know instantly that the pair is not exactly on the best of terms. While we may fear that Walter would want to kill his wife and call it a hunting accident, we quickly see that he doesn't have it in him. It isn't until Adam appears that Walter develops the instinct to kill out of self-preservation. As a thoughtful piece of horror cinema that could be tipped into the vein of exploitation, 'Hitch-Hike' is a tense and creepy movie. The tension grabs hold and doesn't let you go, even when you think Walter and Eve have made it to safety, there is this niggling feeling in the back of your spine that tells you that this ordeal is far from over.

'Hitch-Hike' is one of those great thrillers that reminds you it's never a good idea to pick up David Hess. After 1972's 'The Last House on the Left,' you think people would have learned! While Franco Nero and Corinne Cléry deliver fantastic performances, it's David Hess that steals every scene of the film. He's creepy, demented, and proves that he's smart, cunning, and capable of extreme violence. Whenever I see him in a movie, even one where he's not a sick, twisted bad guy, I still get creeped out by David Hess. While the man had a great range of talent, he sadly got pigeonholed into being the murdering rapist throughout the 1970s and into the 1980s. While he may have been known for that type of character, Hess was also a musician and wrote hits for Elvis Presley, Sal Mineo, Conway Twitty, and Pat Boone. He no doubt loved playing the psycho, I felt it important to mention the guy's other accomplishments.

As a fan of Westerns - especially Italian Spaghetti Westerns - it's nice to see Franco Nero doing something a little different. I don't know how or why the notion that Nero was a one-dimensional actor got started, but if you ever need proof of the man's capabilities, just watch the opening scene of 'Hitch-Hike.' Out of any scene in the rest of the movie, this one is perhaps the most unnerving. One second he's looking at his wife through the scope of his rifle, the next he's aiming at a deer and then back to his wife. Without saying a word, you can see the gears in his head slowly turning around and weighing his options and it's truly a frightening sequence and sets the pace for the rest of the film. 'Hitch-Hike' goes like that from scene to scene. The film alludes to what people are capable of, allows you to see their internal debate without overtly stating what they're thinking and then we witness their actions. Sometimes it's a surprising moment of bravery, sometimes it's an exhibition of the worst parts of humanity. 'Hitch-Hike' is a damn creepy flick and I dug every minute of it.

'Hitch-Hike' arrives on Blu-ray thanks to Raro Video and is pressed on a BD25 disc. Housed in a standard Blu-ray case, the slipcover offers alternate cover art while the case art reflects one of the original posters for the film's release. Also included in this set is a booklet featuring an essay about the film by Bret Wood. The disc opens directly to an animated main menu with standard navigation options. The "Bonus Feature" option takes you directly to the film's sole extra feature 'Road to Ruin.'

Boasting a fresh HD restoration, 'Hitch Hike' is presented with a stunning 1.78:1 1080p transfer. From the opening image of Franco Nero looking down the scope of his hunting rifle, it's easy to notice the incredible amount of detail the image retains. facial hair, skin pores, the stitching on his clothing; all of it is clearly visible and easy to appreciate. Fine film grain has been retained and doesn't appear to have been scrubbed by any sort of DNR or artificial smoothing and is free of any kind of banding or other compression artifacts. For some scenes the grain is heavier than in others but is never too noisy or distracting. Colors are bright and vibrant with plenty of primary pop. Black levels are deep and inky with plenty of shadow separation allowing for a strong sense of three-dimensional depth to the image. The print sourced for this transfer is in fine shape without any noticeable damage or speckling to speak of. This is simply a beautiful looking transfer.

'Hitch Hike' arrives on Blu-ray with either an Italian DTS-HD MA 2.0 with English Subtitles or an English DTS-HD MA 2.0 audio track. Either way you go, you're picking a winning audio track. Personally I preferred the English audio as it looks and sounds more accurate to the film, it's clear that in nearly all of the scenes that the actors are speaking English, so this track minimizes the rubber-mouth effect to a degree. Both tracks are dubbed, so there's no getting around a measure of inauthenticity. Thankfully both tracks sound resonate and present with plenty of atmospheric and background effects so neither track feels overly tinny or hollow. Dialogue for both tracks is crisp and clean and easy to hear without interference from other elements. Both tracks keep to the midranges and levels are spot on without any need to keep a thumb on the volume controls. That said, I will say that the clear star of both tracks is the creepy and impressive score by Ennio Morricone. This movie could have been terrible and I would still suggest fans of Morricone's music give it a listen just to hear this score. In the roughest of terms it's like hearing a blend of what was 'The Man with No Name' trilogy with what he would put into 'The Untouchables.' As soon as the movie finished I set about trying to find a copy of this score.

Road to Ruin: (HD 26:29) This is a solid in-depth look at the making of the movie featuring interviews with David Hess, Franco Nero, Corinne Cléry as well as members of the crew. It's cool to learn that Nero put in a word for David Hess - the two actors had worked together on the TV film '21 Hours at Munich' and Nero had great things to say about the young and ambitious actor and recommended him for this film.

'Hitch Hike' may follow an expected formula of the "crazy hitchhiker" trope, but it's Pasquale Festa Campanile's slick direction, a great script, and a talented cast that keeps this one feeling fresh and frightening. Prior to this release, I'd only ever seen 'Hitch Hike' sitting on a rental store's shelf, I'm glad I got the opportunity to sit down and see this one, it's a welcome addition to any collection of horror films. Raro Video has done a great job bringing this flick to Blu-ray with an outstanding A/V presentation. While there is only one extra feature on this disc, it's worth a watch. Recommended.

Sale Price 109.95
Buy Now
3rd Party 109.95
In stock. Usually ships within 4 to 5 days.
See what people are saying about this story or others
See Comments in Forum
Previous Next
Pre-Orders
Tomorrow's latest releases