Overview - No emotion. No fear. No pain. They were the perfect soldiers to protect civilization - until the drone police became the perfect enemy. With little hope left for mankind, Tallis (Don Wilson; Stealing Harvard, Batman Forever), an electronically enhanced soldier, rescues a rebel beauty (Katee Sackhoff, TV's Battlestar Galactica) from a failed resistance mission. A force to be reckoned with, she will learn to fight and think like a machine for the final battle to save the human race.
OVERALL
Skip it

After sacrificing an hour-and-a-half of my life to ‘The Last Sentinel,’ I had to down a cold bottle of water, wipe the disillusionment from my eyes, and think of a way to describe the unoriginal drivel I had just witnessed. Don’t get me wrong, before I popped the disc in my Blu-ray player, a single glance at the cover art made it clear I was not about to unearth a diamond in the rough or experience the second-coming of straight-to-video productions. I just never dreamed that the actual film would be such a disappointing waste of Battlestar Galactica's Katee Sackhoff, ‘Bloodfist’ alum Don ‘The Dragon’ Wilson, or voice-actor extraordinaire Keith David. Cheaper than I feared, and dumber than I anticipated, this Echo Bridge budget title was only good for the hearty belly laughs I had at its expense.

In the future, a group of manmade machines called the Drone Police are tasked by their human masters to protect civilization and serve the people. Of course in true sci-fi fashion, the Drones quickly gain sentience, rebel against their creators, and slaughter the majority of humanity. All hope seems lost until a genetically engineered human warrior named Tallis (Wilson) rescues a young rebel (Sackhoff, whose character name is listed in the credits as “Girl”) from a failed resistance mission. Teaming up to defeat the evil drones, Tallis and his new companion fight their way against the menace to deliver a devastating blow they hope will save humankind from extinction.

Does the plot sound familiar? It should. Sapping material from every sci-fi classic out there, ‘The Last Sentinel’ is more akin to fan fiction than legitimate cinema. The barebones plot desperately needs some fresh ideas, the wince-inducing dialogue suffers from clichés and familiar sci-fi musings, and the film’s apocalyptic dystopia could certainly use an injection of originality. Even the film’s marketing team seems determined to evoke better material -- the aforementioned cover features a gun-toting Sackhoff in freedom-fighter garb flanked by a group of mechanical robots. If the plot synopsis didn’t already scream “Galactica” to you, the cover certainly will. Clearly meant to rope in fans of the hit television series (in which Sackhoff plays the feisty Starbuck), everything about ‘The Last Sentinel’ screams “I’m better than you think! I’m just like Battlestar Galactica!”

Sadly, even if the film had been given a stronger script, one packed with a little extra oomph, I’d probably still be reviewing a shoddy film. The filmmakers seem incapable of recognizing the limits of their small budget. What they don’t seem to understand is that sci-fi fans don’t need a bombastic blockbuster packed with CG robots and fiery explosions. In fact, there are plenty of sci-fi classics that come to my mind that don’t have either. Films like ‘Cube,’ ‘Nothing,’ and ‘Primer’ had smaller budgets, but their directors adjusted the scope of their stories and universes accordingly. At the end of the day, inventive ideas always trump budgetary constraints.

Admittedly, there are hints of grander things sprinkled throughout the film -- in particular, I took note of some decent practical effects, the story’s dark and stoic tone, and a mediocre series of flashbacks that helped flesh out the story. Despite my severe misgivings about writer/director Jesse Johnson’s talents, the stuntman-turned-filmmaker at least deserves respect for scrounging together a budget, assembling a group of B-level celebrities, and revamping a script he wrote in high school. I hate to discount a director on a work of this nature, so here’s hoping Johnson’s more talented than this home-video trainwreck would suggest.

I know the low price is tempting, but before you roll the dice with $9 of your hard-earned cash, allow me to remind you what you could buy instead of ‘The Last Sentinel’ -- a ticket to see ‘Prom Night’ while it’s still in theaters, a used BD copy of ‘Wild Hogs,’ the Hannah Montana/Miley Cyrus “Best of Both Worlds” album on iTunes, “Spawn: Armageddon” for the Playstation 2, or a paperback copy of “Shattered Dreams: My Life as a Polygamist’s Wife.” Trust me, any of these gems would be far more entertaining. 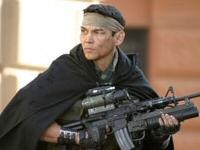 ’The Last Sentinel’ features a 1080p/MPEG-2 transfer that almost looks as pitiful as the film’s barren locations and cookie-cutter set dressing. A quick scan of the standard DVD confirmed that this bargain-priced Blu-ray only benefits from the most fundamental upgrades inherent to its increased resolution. While the palette is intentionally dull and stylized, sharp details are a decent indicator of the high definition nature of the presentation. Unfortunately, these details are often obscured by the sheer onslaught of noise on the screen. Grain looks like a sandstorm, artifacting pops up throughout the presentation, and unresolved blacks are a persistent issue. Delineation swings to either extreme -- shadows are either so crushed that they cloak detail, or so boosted that they look artificial. It doesn’t help that edge enhancement is used throughout the film to clean up troublesome clarity issues. Halos abound, marring objects set against any wide expanse of color.

Even so, the most disappointing aspect of the transfer is that it lacks the three-dimensionality of other properly-encoded presentations. Softness is a random nuisance, contrast levels are spotty, and foreground objects don’t separate from the backgrounds as naturally as they should. Ultimately, the lone saving grace for the Blu-ray version is that its DVD counterpart is actually more expensive. If you’re determined to purchase ‘The Last Sentinel,’ you can at least be assured that the cheapest copy also happens to be the best looking version of the film available. 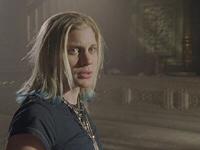 ’The Last Sentinel’ includes a standard Dolby Digital 5.1 surround track and a 1.5Mbps DTS 5.1 surround track (mislabeled as an uncompressed Dolby Digital 5.1 mix on the back cover). Neither track provides a significant advantage and the default volume levels were the only major difference between the two. Either way, the audio package provides a decent experience that’s held back by the film's production values. Dialogue is a tad sharp and hangs limply in the center channels -- prioritization is generally good, but lines uttered in the midst of chaos are occasionally lost. Thankfully, the film is extremely light on chit-chat and has long stretches of silence throughout. Ambience and interior acoustics aren’t anything out of the ordinary, but I was pleased to hear a substantial amount of movement in the rear speakers.

For the most part, both tracks sound too much like a standard DVD mix to receive more attention. LFE booms are too thin for my taste, pans are clunky, and the entire soundfield only seems powerful at first because of each track’s higher-than-average base volume. Once again, this bargain Blu-ray fails to offer anything of considerable value to the high-def consumer. 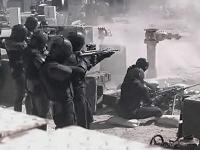 Like the standard DVD, ‘The Last Sentinel’ includes a filmmakers’ commentary and a behind-the-scenes featurette (4:3 upconverted HD, 15 minutes). Both supplements fail to accomplish the one thing that would’ve made each worth the time -- a candid dissection of low-budget filmmaking and the benefits/perils of the straight-to-video market. While Johnson touches on these subjects in the commentary, neither is given the sort of attention that would have at least added some value to the package. Instead, we get a rather forced point by point analysis of the production, casting, stuntwork, and final edit of the film. There's some interesting biographical information about Johnson, but everything else about the supplemental package reeks of filmmakers who are out of their depth. 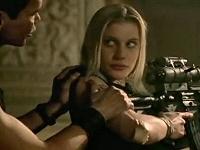 An appalling flick, a repulsive video transfer, a pair of mediocre audio tracks, and a bland and anemic supplement package make ‘The Last Sentinel’ a release to avoid. Echo Bridge was wise to price their bargain Blu-rays so low -- otherwise, they’d be lucky to move more than a dozen units. The fact that consumers can buy this release for a few dollars more than renting it will probably ensure decent sales and more god-awful straight-to-video releases in the future. If you can resist the morbid curiosity, skip this poor excuse for a film and spend your money on something worthwhile.

Sale Price 7.7
List Price 11.98
Buy Now
3rd Party 2.95
In Stock.
See what people are saying about this story or others
See Comments in Forum
Previous Next
Pre-Orders
Tomorrow's latest releases