The Way He Looks

Set against the music of Belle and Sebastian, Daniel Ribeiro's coming of age tale, THE WAY HE LOOKS is a fun and tender story about friendship and the complications of young love. Leo is a blind teenager who's fed up with his overprotective mother and the bullies at school. Looking to assert his independence, he decides to study abroad to the dismay of his best friend, Giovana. When Gabriel, the new kid in town, teams with Leo on a school project, new feelings blossom in him that make him reconsider his plans. Meanwhile, Giovana, grows jealous of this new found companionship as tensions mount between her and Leo.

Coming of age stories typically run the gamut from emotionally harrowing to sickly saccharine. And although writer-director Daniel Ribeiro's teen romance, 'The Way He Looks,' leans precariously close towards the latter more often than not, it manages to stop just short of cloying. While the story at hand is undeniably charismatic and filled with plenty of charming moments, barely saving itself from becoming irretrievably mawkish isn't necessarily what a film about young love in the face of disability should aim for as its biggest achievement.

The story centers on Leo (Ghilherme Lobo), a blind teenager desperate to escape the overly protective confines of his parents' home. With the help of his doting, and eager-to-be-loved best friend Giovana (Tess Amorim), Leo strikes up a friendship that just might become something more with Gabriel (Fabio Audi), the curly haired new kid who has everyone in school captivated. It isn't your typical coming of age story by any means, and that certainly helps the film feel different and intriguing during the early going. But with all the atypical elements in play, the film doesn't necessarily do anything truly captivating either.

Ribeiro paints a picture of blissfulness in the opening moments, as Leo and Giovana whittle away the last day of summer break, idling about on the side of her pool, baking in the hot sun and playing lazily with one another. As with most portraits of teenage paradise, this moment is certain to come to an end. Like the calm waters of Giovana's pool, their lives are about to be disturbed as the characters find themselves thrust into adulthood. Knowing this, Ribeiro goes to considerable lengths to detail the importance of the journey's beginning, while making sure to underline how Leo's inability to see makes his willingness to travel the road ahead even more challenging.

The notion of independence and self-reliance is important in two distinct ways, as the film spends plenty of time establishing Leo's home life, and the way his parents' protective nature seemingly augments what makes him different. Leo wants to do what kids his age do. He wants to stay out with his friends, be irresponsible, go to parties, and maybe, if he can meet the right person, eventually kiss someone. Leo's need for independence is so great he has begun looking into a foreign exchange program to the United States, just to put some distance between him and his protective home environment, while also proving to himself that he can do it. 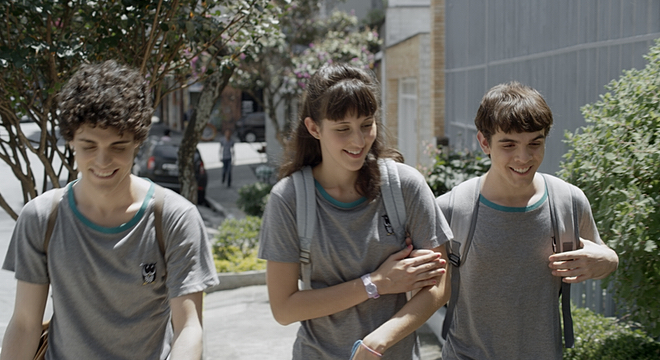 That balance between the need for independence and the need for love is struck early on when Giovana invites Gabriel into her and Leo's inner sanctum, as a means of gaining his affection. Her plan works, but, like everything else in the film, not in the way she or anyone else had imagined. Soon Leo and Gabriel are paling around, working on class projects together, and enjoying one another's company – without Giovana. Ribeiro paints the young woman as the antithesis of Leo in many ways. Where as Leo craves independence and a true emotional connection with someone, Giovana is utterly dependent on her platonic relationship with Leo, and is looking for any kind of romantic/sexual connection with anyone.

As Ribeiro demonstrates through that opening sequence, the calmness of Leo and Giovana's relationship is completely upset by the arrival of Gabriel. The irony being, Giovana is the one who left the gate to paradise open, instigating the change that completely upends her happy stasis. That makes Giovana the inadvertent catalyst to change. And while the irony of Leo and Gabriel developing feelings for one another makes her story the most compelling, the film is more intent on centering its focus on Leo's experiences. Now Leo's not an uninteresting character, but his ability to create change and make choices is dramatically different from Giovana's.

For the most part, Leo exists to react to the environment around him, rather than be a force within it. He reacts to his parents' coddling of him; he reacts to the paper-thin, stock bullies in his school, who mock his blindness by taunting silently taunting him; he reacts to Gabriel's increasingly obvious affection of him, but does little to pursue it. At one point during the film, Leo reluctantly attends a party, wherein one of the bullies – an obnoxious, blonde-haired teen permanently wearing an exaggerated facial expression – instigates a game of spin the bottle. If you guessed that Leo's first chance to kiss someone turns into a socially awkward experience that would scar anyone as sweet and good-natured as the film's protagonist, then you win.

What's frustrating about the party sequence is how Giovana and Gabriel hover in the background, both being effected by Leo's presence and his desires, but in different ways. While Gabriel takes action to become closer to Leo, Giovana distances herself from the group, feeling shunned and rejected, embarrassed by the burgeoning romance between her two friends. Essentially, Giovana is living her worst nightmare: not only does her would-be paramour reject her, but that rejection causes her to lose her best friend as well.

And therein lies the main problem with the otherwise sweet and entertaining film: 'The Way He Looks' is essentially focused on the wrong character. Leo's circumstances make him unique and interesting, but in a way that is more superficial than either Gabriel or the far more interesting Giovana. Leo is filled with wants, many of which are made explicit, but very few are ever achieved by anything he actually does. Instead, it's Giovana who makes almost everything in the story happen, and for whom the stakes are actually the highest. Leo makes for a compelling protagonist on paper, but his journey isn't nearly as forceful as it should have been. Instead, the most interesting character, the one who goes through the most change, and who instigates the biggest parts of the plot is sidelined for much of this coming of age story that ultimately favors syrupy sentimentality over the dramatic push of burgeoning adulthood. 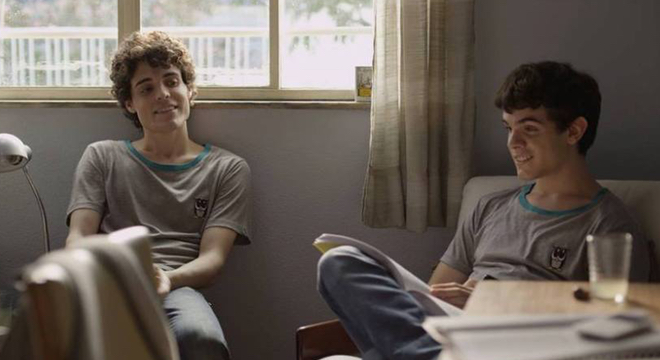 'The Way He Looks' comes from Strand Releasing Home Video as a single 50GB Blu-ray disc in the standard keepcase. The disc contains a numerous extras, all of which are accessible through the top menu.

The 1080p AVC/MPEG-4 encoded transfer is crisp and clear from start to finish. The image offers plenty of fine detail in nearly every shot. Facial features, hairs, and texture on clothing are all present and accounted for. There is some slight variation in terms of clarity during certain scenes, as some moments of soft focus do tend to show up on wider shots. Close-ups, however, are generally bright and detailed, offering the best of what the transfer has to offer.

Contrast and color add depth to many scenes, as the full-bodied blacks are free from banding and crush, and offer crisp edges, rather than swallowing detail. Nighttime scenes look particularly striking, as light from various sources illuminates the characters and environments in unique ways. The color palette is a little different, as the film tends to lean towards a yellows and light browns during the early going. While this helps establish setting and a timeframe (i.e., South America in the summer), it can give certain early sequences a filtered look that is somewhat distracting.

Nevertheless, the image still manages to be detailed enough that the nuance of certain segments doesn’t detract too much from the overall image.

The Portuguese DTS-HD Master Audio 5.1 track is a winner. This is a relatively quiet film, dependent mostly on dialogue and the occasional environmental sound that puts the listener in the setting. This is generally more discreet than overt, with the rear channels favoring small bursts of ambient noise over more obvious or direct choices. That means that classrooms are filled with subtle sounds of students talking, or walks contain the slightest hint of traffic in the background. Party sequences, though are more deliberate in their presentation of sound. The rear channels suddenly come alive with ambient noises, like conversations and music, while the directionality helps place characters in different parts of the room.

Sometimes, the balance can feel a little off, as music occasionally overpowers other elements of the movie – especially the moment when Gabriel introduces the classical music-loving Leo to Belle and Sebastian. The music sounds great, but the dialogue suffers as a result.

Overall, this is a nice sounding disc that offers more than you might expect from such a dialogue-driven film.

Deleted Scenes (HD, 14 min.) – There is a short introduction to the deleted scenes by the film's writer and director, Daniel Ribeiro, who explains why he needed to omit the scenes, most of which are surprisingly engaging and could have balanced out some of the character deficiencies noted in the review.

Behind-the-Scenes (HD, 10 min.) – This featurette is more of your standard behind-the-scenes offering. There's not much substance to the information, but it does offer a candid look at the actors while on set. Some of the interviews are entertaining, but they don't really offer much.

Interview with Cast and Crew (HD, 26 min.) – Most of the interview is delivered in English, surprisingly enough. This interview, though not revelatory, does provide a few interesting details about the journey from short to feature-length film, as well as how the cast and crew bonded over the course of the shoot.

Short Film: 'I Don't Want To Go Back Alone' (HD, 17 min.) – This is Ribeiro's short film that inspired 'The Way He Looks' in its entirety.

Although 'The Way He Looks' is often too sentimental at times, it still offers an engaging story filled with likeable characters you want to support and root for. Central characters Leo and Gabriel may teeter on the edge of being too perfect, while the flawed and more compelling Giovana is pushed to the background, but that doesn't entirely derail the film. Likeability is important, and this movie has it in spades. And while that is important, the film often feels like Leo's parents: too concerned with playing it safe to offer the kind of excitement audiences crave. With good image and sound, and some fun extras, 'The Way He Looks' comes recommended.