Marc and Hans, two old gangsters, are ordered by a rival, the American woman, to repay a debt. They plan to steal the vaccine for a mysterious virus, STBO, which affects those who make love without being in love and is wreaking havoc among teenagers. After the death of their associate Jean, the two accomplices call on his son, Alex, known as ""Chatterbox"", who is a talented conjuror. Alex, who has just left his girlfriend Lise, falls madly in love with a girl in a white dress he sees on a bus. Her name is Anna and she turns out to be Marc's mistress...

In 1986, a 26-year-old Leos Carax released 'Mauvais Sang' into the world. It was his second feature and follow-up to 'Boy Meets Girl,' which debuted two years prior. The film cemented Carax as the director his previous effort suggested he was: an incredible young talent capable of delivering a film that was at once a tribute to cinema, and the spirited start of something new. The title, otherwise known as 'Bad Blood,' is like Juliette Binoche's laconic Anna and her red sweater: another hint at homage seemingly baked into the film's essence. But like all that Carax has delivered since, the end result goes well beyond reverence, venturing into a surreal world of unfiltered emotion that resonates as strong today as it did 28 years ago.

The film centers on Alex (the very sinewy Denis Lavant), a young man known as "Chatterbox," and who, like his recently deceased father – dad wound up on the wrong side of a passing train – is "good with his hands." That makes Alex an asset to Marc, an aging criminal played by Michel Piccoli, who cajoles the young flimflam man into taking his father's place, leaving behind his life and devoted girlfriend Lise (played by a 16-year-old Julie Delpy) to join the gang as they work complete a heist. The group's target: a vial containing the cure for STBO, a virus that infects and eventually kills anyone who makes love without love.

Anxiety about the AIDS epidemic looms heavily in the subtext of STBO, one that is further carried through Alex's ongoing interactions with the heartbroken but determined-to-be-reunited Lise. Alex tells her to forget about him, and to find new lovers, but to be careful whom she makes love to and how. But it is also apparent in the way the yearning for new love is explored, especially through the sense of touch, adding another layer to the idea of Alex's hands being a commodity.  The desire for new love and its need for a particular kind of proximity generate tension through the lingering unease of the virus and its societal implications. In particular, the cure's temporary containment by an unseen authority from which it will be stolen, blends science fiction and heist films in a way that becomes wholly unique in the hands of Carax. But the amalgamated genre elements also provide the necessary foundation to allow the amplified emotionality of 'Mauvais Sang' to work. 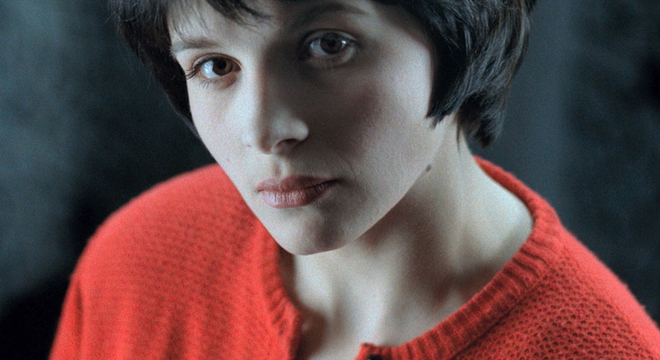 The film eschews plot for the most part, focusing instead on something far more important: the excruciating, full-body assault of being madly in love. Like most of Carax's work, it is less concerned with running down a conventional story from beginning to end, than it is in repeatedly evoking a particular condition of the body, mind, and especially the soul. In this case, the film's romantic heart is worn demonstratively on its sleeve at all times. The figurative organ's unrestrained beating is hinted at when Lise chases after Alex as he makes his way to the train, but once Alex catches sight of Anna, in route to meeting with Marc, those beats become an unrelenting drum from which Carax's story establishes its distinctive cadence.

The rhythm of 'Mauvais Sang' is made up of a collection of indelible moments, each revolving around the implication of romance. Alex's instantaneous affection for Anna is thwarted almost as quickly, as it is revealed Anna is Marc's mistress. This, in turn, creates a dichotomy with Alex's unresolved relationship with Lise. The sublimation of Alex and Anna's chemistry and feelings for one another become evident in scenes lik their tandem skydive, as well as their highly charged pseudo sexual exchange where a thin stratum of shaving cream becomes all that stands between them. But perhaps there is no more effusive moment than when Lavant runs down a darkened city street to the sounds of David Bowie's 'Modern Love' (a scene that fans of Noah Baumbach's 'Frances Ha' will be familiar with). The long tracking shot is as much an expression of Alex's inability to contain the emotions welling up inside him, as it is his desire to quell them with the occasional self-inflicted punch to the stomach. It is a moment of unconstrained joyfulness, tinged with melancholy.

Balancing those two elements can be difficult for any filmmaker, let alone one who is embarking upon his second feature. And yet, Carax blends and mixes emotions like a mad alchemist, brewing up a potent concoction that is gleefully chaotic at times, but ultimately settles into a state of sublime poeticism. It is, in a way, as much about the tempestuous state of being in love, as it is about the unruly passion that simply comes from being young.

But the film would be nothing if not for the way Carax communicates so beautifully through his characters – Lavant and Binoche in particular, since he would go on to create more films with both of them, like 1991's 'The Lovers on the Bridge.' Or, most recently with Lavant in 2012's similarly exuberant ode to cinema, 'Holy Motors.' 28 years have passed since 'Mauvais Sang,' and although the energy has shifted, from the boundless energy of Alex's invincible youthfulness to the measured vitality of Oscar's (Lavant's chamelonic character from 'Motors') artistry, it is no less enthusiastic. Time has not diffused the magic of Carax's filmmaking in any way; it has only made it stronger. 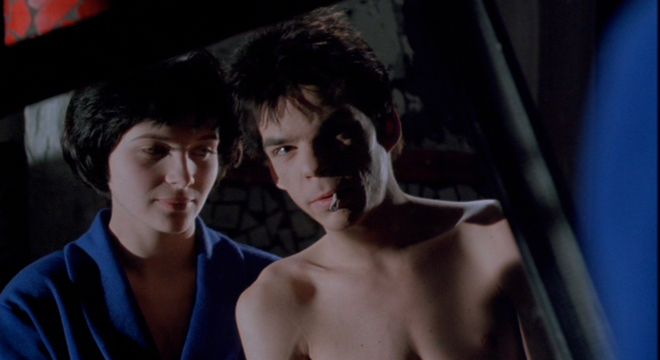 'Mauvais Sang' comes from Carlotta Films US as a single 50GB Blu-ray disc in an all black keepcase. The case is housed in a cardboard sleeve that features a shot of Juliette Binoche on the back, along with several pull quotes from review of the film. The disc does not contain any previews (aside from the original trailer), so viewers can jump straight to the film, or the special features if they so choose.

'Mauvais Sang' has been given a great looking restoration for its first venture into the world of HD. The image is incredibly crisp and clear, with plenty of fine detail on display in close ups. Facial features reap the most benefit from the image, revealing pores and small lines, hairs, and other imperfections (not on Binoche's face, of course) that give this dreamlike film a distinctive sharpness that is enticing. Fine textures are also noticeable throughout. From fabric to stone, small elements stand out, offering a substantial amount of depth in the image. Wider shots do offer some limitations on the level of detail, but they are nominal for the most part.

Contrast and color are both very high. Black levels are rich and full-bodied, producing deep shadows that a character can either disappear into, or is better defined by. There's no evidence of crush or banding anywhere, making the darker elements stand out by their inkiness alone. White balance is also quite good, as no shot is ever blown out or too hot. Color, however, leaps from the screen. Reds brilliantly pop, while yellows, blues, and greens all radiate pleasantly. Nothing looks over saturated or over done, however; it's all well measured and precise.

There is a slight hint of grain, and the occasional floating element here and there, but nothing that can truly spoil an otherwise terrific transfer. 'Mauvais Sang' has likely never looked this good.

The disc has been given a DTS-HD Master Audio 1.0 track that sounds quite diverse. Dialogue is measured and precise throughout, with subtle alterations in tone and intensity noticeable throughout. The dialogue is balanced quite well with the sound effects and the score, giving the audio an unexpected and consistent depth. Music is often given priority during scenes where dialogue is sparse, but when the character exchanges heat up, the music will drop to a more appropriate level. Most surprising, though, is the way 'Modern Love' – likely the most important part of the film – sounds. The music is rich and vibrant, and although it lacks the multichannel aspects of contemporary films, it still resonates powerfully.

This is a surprisingly robust 1.0 track that will please fans of the film who are expecting great things, and newcomers alike.

Outtakes and Rushes (SD, 20 min.) – A series of outtakes from the actors, wherein they either flub lines, make one another laugh, or something unexpected happens. If nothing else, this offers a glimpse behind the scenes of a Carax film, which, for his fans is a rare treat indeed.

The film also goes by the title 'The Night is Young' – which, although it speaks to many of the themes about youth and the movie's own flirtations with noir, isn't quite as layered as 'Bad Blood.' Nevertheless, knowing that may make it easier to track this gem down, if you haven't yet seen it. Carax is a truly singular filmmaker, and this stands as one of his most impressive efforts. With a wonderfully restored image, surprisingly rich sound, and a must-see documentary attached, 'Mauvais Sang' comes highly recommended.

Sale Price 27.99
List Price 39.95
Buy Now
3rd Party 24.99
In Stock.
See what people are saying about this story or others
See Comments in Forum
Previous Next
Pre-Orders
Tomorrow's latest releases