Visually stunning and wildly inventive, this film explores the mystery of the night in a sweeping nocturnal adventure full of Alice in Wonderland-like characters and moody, dream-inspired landscapes. Have you ever wondered why your hair looks funny in the morning or where the sounds outside your window come from at night? A young boy named Tim finds out after an unusual discovery on the rooftop of his orphanage plunges him into the secret world of NOCTURNA, inhabited by curious creatures who control the night.

From the onset, 'Nocturna,' a 2007 animated film from Spain, feels noteworthy thanks to its unique, charming visuals that feel familiar (think 'The Legend of Zelda: The Wind Waker'), and at the same time altogether original. In a time when animated films have largely begun to take on particular sheen (i.e., Pixar, Dreamworks Animation), it's refreshing to see a film that thinks outside the box, and has a vision of the world that looks, sounds, and operates in a far more figurative and expressive fashion.

Co-written and directed by Adrià Garcia and Victor Maldonado, 'Nocturna' works as both straight-up fantasy and as a visually captivating representation of how a child might seek to make sense of his world – a little bit of 'Monsters, Inc.' meets a lot of 'Alice in Wonderland.' As such, the film revolves around Tim, a young orphan boy who is afraid of the dark. Tim combats his fear by making any source of nighttime light his nocturnal companion, usually by noisily pushing his bunk across the floor at night and positioning it at the communal bedroom's sole window, so that he can gaze out at the shimmering night sky. When that doesn't work, Tim steals away to the orphanage's rooftop, just to be that much closer to the moon and stars that keep the darkness at bay.

Like most children in such narratives, Tim is something of an outcast. Shunned by his peers for both his fear of the dark (an early scene involves Tim's reluctance to fetch a ball that had rolled into the orphanage's unlit basement, opening him up to their scorn and ridicule), and his nightly obsession with the night sky, Tim is naturally the perfect choice to embark on a quest to save the stars (and all the light, for that matter) from the mysterious force that is snuffing them out. The young boy's fear, coupled with his overwhelming concern for the stars he knows by name – particularly "his" star, which was chosen in part by a parent who is no longer in the picture – provides the impetus for him to leave the orphanage at night, to seek answers to the mystery of the encroaching darkness. 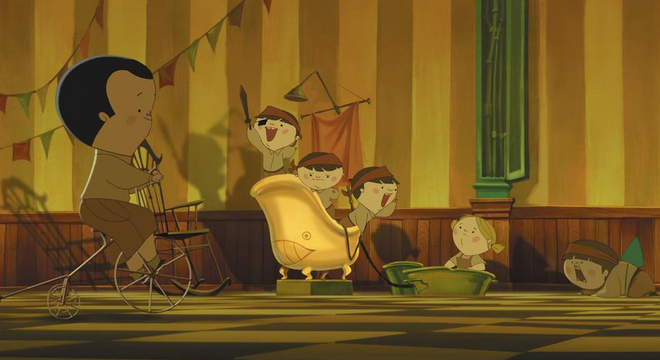 But Tim's quest is destined to reveal more than who or what is behind the stars' disappearance; it opens up the nighttime world to show a bustling network of strange and beautiful creatures creating everything from fog and the morning dew, to the tiny innocuous noises one hears at night to the tussled bedhead one wakes up with in the morning. While Tim is both the film's protagonist, he also serves as the audience's proxy in this new and enchanting domain, while the cat Shepard (a.k.a. Pastor de gatos) serves as the guide to everything wondrous and bizarre.

Joined by Shepard and his cats (one for every sleeping child), Tim ventures across the surprisingly well-lit city in search of answers for the darkness. Along the way, he encounters many interesting characters, some, like Moka, the ostensible man in charge, and his devious servant Mister Pi (pronounced: "pee," for reasons that become obvious during a key moment in the film) seem to have ulterior motives, while others, like Murray the light bulb, become plot devices in order to generate tension between Tim and his inevitable showdown with the shadow creature.

For the most part, 'Nocturna' lives and breathes on the brilliance of its art design, and its playful willingness to explain the night as a workaday life for denizens of the nocturnal world. From the blue-collar attitude of the light bulbs to the booziness of the dew creatures, there's a familiar bent to nearly everything that Tim encounters. That includes Shepard. With his top heavy, overstuffed stature and the seam running down his noseless face – suggesting a child's stuffed toy that is cradled at night for comfort and protection – Shepard is a beguiling presence from the first moment he appears onscreen. It's a shame, then, that he takes on such a prototypical role as Tim's protector, a being of action and not much thought – which explains why he is so easily fooled by a lie Tim tells after meeting with Moka – but doesn't necessarily make him interesting outside of his oversized body.

While its layered visuals and enchanting design are stunning to look at, the narrative is sometimes not quite as nuanced. Many will offer the excuse that this is children's' entertainment, and therefore doesn't need to be held to such a high standard. But that kind of thinking only sells films like this short. It's a mistake to assume that the appeal of 'Nocturna' is only in its visuals, and that its narrative needn't reach for anything more profound than the simple story of a boy facing his fears (real or imagined), because of the assumed level of sophistication of its target audience.

Tim's arc of overcoming fear and loneliness is fairly rote, and his relationship to the denizens of the nighttime world seems to be too easily understood as the imagination of a child gone wild. But for the viewer who choses not to rationalize Tim's adventure as the musings of an innocent mind, the film and its characterizations can feel somewhat one dimensional. Even the seemingly duplicitous, Moka and Mister Pi, who operate as red herrings for much of the film, before their true nature is finally revealed.

Still, the movie deserves credit for its creativity and its good-natured approach to telling its story from the point of view of a child, without resorting to the more puerile musings of similar films. The narrative can be a bit of a mixed bag, but for those looking to be engaged by the look and feel of an animated film that marches to the beat of its own drummer, look no further than 'Nocturna.' 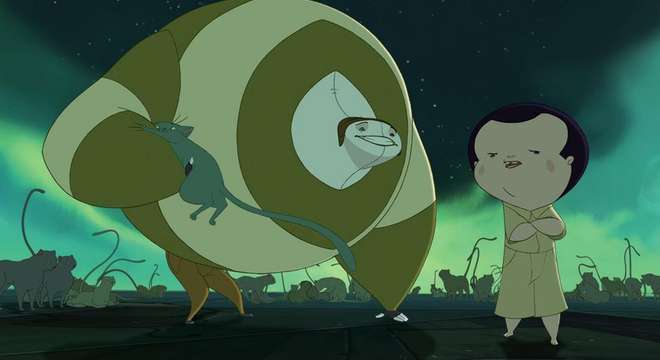 'Nocturna' is a 25GB Blu-ray disc from Cinedigm in the standard keepcase. The case comes inside a cardboard sleeve that features the same artwork as the case. The film jumps straight into the top menu, where you can choose to watch the film, or go through the special features.

Unsurprisingly, the 1080p AVC/MPEG-4 encoded transfer delivers a nearly flawless animated image that is filled with sharp, clear lines, and deep, rich colors. The film has a mostly blue-green palette that is offset by the earth tones of certain characters – especially the browns and whites of Shepard and the bright yellows of the light bulbs and the stars – in a way that generates a pleasing contrast on screen. Tiny details are noticeable throughout, as the artists have created a fantastical world of curling clouds, towering buildings, and bricked streets that have just as much character and nuance in their design as any of the strange creatures of the night.

The colors are solid and often quite bright, without being too overstated. Daytime scenes focus on the warmth of the sunlight, bathing Tim's orphanage in a pleasing golden hue. Meanwhile, nighttime is noticeably cooler, but also softer; colors tend to blend more and are used to create a more compelling, deeper landscape than during the day.

There is slight presence of banding in certain portions of the film that can detract from overall image. These are few and far between – which is something considering how many shots seem ripe for increased banding – but they are noticeable. Otherwise, the image is crisp and pristine from start to finish. This is a visual film first and foremost, and the transfer on this disc does a nice job of living up to the lofty expectations of its design.

The DTS-HD Master Audio 5.1 mix delivers strong audio that is subtle when it needs to be, but also delivers rousing audio from both the score and the sound effects to punch up certain sequences. Dialogue is easily understood, as it takes precedence over most everything else early on. Small ambient noises are available in some spots, but the mix is arguable more focused on creating front heavy sound that delivers a big impact. In that sense, everything from Tim's bed being pushed across the bedroom floor, to Shepard's tussle with the shadow creature sound rich and bold, while smaller elements like falling debris or a tidal wave of light bulbs generate subtler sounds that accentuate the scenes, rather than punctuate it.

Rear channels are not given much of a workout, as they typically pick up parts of the score and the occasional environmental noise, but they do add to the immersive effect of the mix. LFE is present in many spots, giving a terrific sense of depth and weight to climactic moments. Mostly, though, the score takes center stage, as it is pushed through the center and front channel speakers with great authority, making the film engaging and effectively aggressive.

Though it doesn't spread itself around too much, the mix is still a winning combination of music and dialogue that is appropriately balanced throughout.

The Making of Nocturna (HD, 9 min.) – This brief featurette offers some interviews with the film's directors and co-writers, as well as others involved in the making of the film. It's not particularly enlightening, but it does offer a glimpse at the thought processes behind the movie.

The Art of Nocturna (HD, 6 min.) – An even shorter supplement that offers a look at how the animation was delivered. If anything, this could have been a much more expansive look into design and animation that would have highlighted the film's most appealing aspect.

Though 'Nocturna' doesn't deliver the kind of sophisticated storytelling that might appeal to both adults and children, its unique sense of design and clean animation will undoubtedly garner looks from everyone who comes across it. Still, with the help of the disc's very good image and sound, the film becomes engaging, it's certainly sweet natured enough to make it worth a look.

Sale Price 18.92
Buy Now
3rd Party 18.35
In Stock.
See what people are saying about this story or others
See Comments in Forum
Previous Next
Pre-Orders
Tomorrow's latest releases