Experienced Green Beret sergeant Johnny Gallagher is escorting a prisoner, Airborne Ranger Thomas Boyette, back to the US, but Boyette escapes and Gallagher must risk life and limb to catch him.

Before every action movie had to compete to be the "biggest movie ever made," studios made mid-level action films like 'The Package.' They set terrific actors like Gene Hackman and Tommy Lee Jones against one another, while filling the film's ranks with the likes of Joanna Cassidy, John Heard, Dennis Franz, and Pam Grier (in a blink and you'll miss her part). These movies succeeded in part because their ambitions were never to conquer the world. They had a story to tell (an often simple one) and, for the most part, they told that story with a certain workmanlike charm.

Directed by Andrew Davis (who would go on to direct Jones to a Best Supporting Actor Oscar in 'The Fugitive' a year after directing him to an "I can't believe he's in this" award in 'Under Siege'), 'The Package' is a twisty tale of international intrigue set during the last days of the Cold War. Hackman plays Sergeant Johnny Gallagher, a career military man whose involvement in defusing a plot to assassinate Russian delegates during a tense U.S.-Soviet treaty negotiation in Germany lands him in hot water with Colonel Glen Whitacre, a snotty military intelligence official played by a very svelte John Heard. The two have a disagreement as to the sort of role the military plays in events around the world, with Gallagher being more of a "boots on the ground" type of guy, while Whitacre operates mostly in the shadows. Those shadows, as it turns out, are responsible for producing a group of overzealous members of the military industrial complex determined to ensure the Cold War keeps things nice and chilly for decades to come.

Unbeknownst to him, Gallagher has a role to play in it all by delivering a reckless soldier named Tommy Boyette (Jones) back to the U.S. for a court marshal. When Boyette gives him the slip at the airport, Gallagher's mission to bring the prisoner to justice slowly uncovers the depths of the military conspiracy, leaving him nowhere to turn but his ex-wife Eileen (Cassidy). The two are suddenly embroiled in a deadly cat and mouse game, when Eileen's investigation into Boyette's past lands her on the same most wanted list as Johnny. With an historic treaty about to be signed in Chicago, the clock is ticking for Johnny and Eileen to track down Boyette and his superiors before it's too late, and the tenuous peace between two superpowers reverts back to an escalation of deadly aggression. 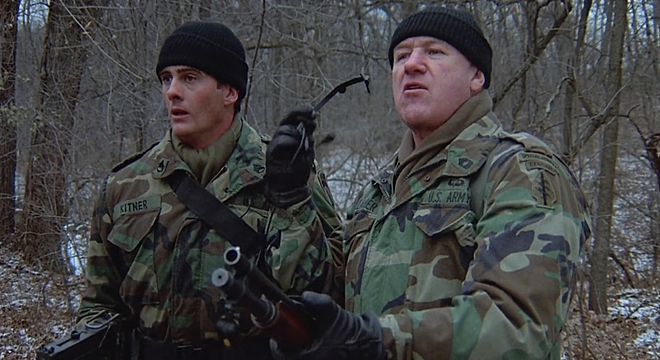 Hackman is at his gruff, charming, everyman best, throughout the film, imbuing Gallagher with equal parts likeability and enough know how that his fish out of scenario doesn’t throw the entire narrative into question. There's just enough gung-ho Americanism in his fight to explain why he's not just going to cut and run, and enough world-weary cynicism to know that it's not beyond the realm of possibility that others – especially higher up the chain of command than he – would see the end of aggression and nuclear arms build up as the end of their glory days. That puts Gallagher in an uncomfortable position of being a pawn in a much larger game with the end seemingly out of his reach – considering he's in the dark as to how high up the plot goes.

For better or worse, 'The Package' isn't terribly interested in exploring the larger ramifications of such a shadowy conspiracy. There's Whitacre, Boyette, and Chelcie Ross as General Hopkins – who despite being in on the scheme from the get go, can't help but seem like the clueless, soulless bureaucrat he would portray just two years later in 'The Last Boy Scout.' (Basically, in the late-'80s and early-'90s, if you needed a guy who epitomized the worst the government had to offer, you hired Ross.) And that trio is enough for Gallagher, Eileen, and Lt. Milan Delich, a chicken wing-loving Chicago P.D. detective played by Dennis Franz to try and topple without the whole plot descending into complete madness.

Instead, this is one of those narratives where the larger machinations conducted by the unseen individuals operating in the shadows that even the shadowy people don't have access to works like a self-cleaning apparatus: the plots are allowed to carry on until they fail, and then everyone involved mysteriously disappears. And that works to enhance the audience's ability to accept the more outlandish aspects of 'The Package,' but it also plays to the needs of the audience at the time. With the Cold War coming to a close, the notion that such a conspiracy might be possible was an oddly reinforcing notion that, amidst all the uncertainty that was to come, there was at least some force out there (nefarious as it was) controlling things. In the end, the notion that the world isn't just random chaos can be an oddly soothing one, especially when the little guy manages to thwart some ne'er-do-wells from tossing that modicum of control into the abyss.

It is very much a product of its time, but 25 years after its release that sense of time has become an asset, not a detriment. It's a history lesson, rather than a relic to be forgotten, and much to Davis' credit, this paranoid, Cold War thriller still stands up because he used the era to frame the action, rather than make an overt statement about it. The result is a film that doesn't feel nearly as dated as it could have, and is just as watchable now as it was back then. 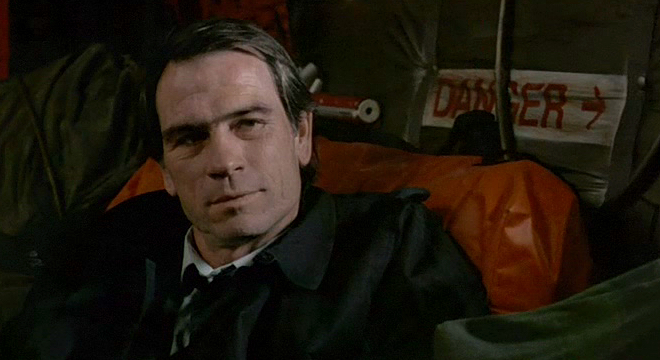 'The Package' comes from Kino Lorber as a single 25GB Blu-ray disc in the standard keepcase. The art is a slightly modified version of the original theatrical poster that plays up Tommy Lee Jones, even though he doesn't play that big a role in the film. There are no previews ahead of the top menu, so you can either watch the film right away, or go through the small assortment of extras. One interesting choice is the option to watch the film with an introduction by Davis, which provides some nostalgic insight into the movie before the action gets going.

'The Package' has been given a very nice 1080p AVC/MPEG-4 encoded transfer that offers an image with dramatically increased detail throughout and enhanced color. The image is clear and crisp, with just a hint of grain, giving it a filmic look that would be appropriate for a movie of its age. The grain never gets in the way, however; it just ages it in a way that is visually pleasing and actually plays up the enhancements the image has been given.

Fine detail is strong throughout, but noticeably stronger during close-ups. Facial features are on full display, boasting strong details like wrinkles, imperfections and hair. Skin tones are all natural and lifelike throughout. Elsewhere, textures are strong, but could be stronger in wider shots. Still, the image has a good amount of depth and background elements look very clear, enhancing the overall street-level atmosphere of the film.

Contrast is strong. Black levels are robust throughout, resulting in sharp edges, and crisp, inky blacks that are free from crush and banding. There are a few instances where the image could have benefited from a slightly darker black, but overall, the contrast works well throughout. Color is slightly muted, which actually enhances the feel of the film, but it is noticeable in certain places when reds and greens don't quite pop.

Overall, though, this is a strong transfer that delivers a great looking version of 'The Package.'

The disc has been given a DTS-HD Master Audio 2.0 track that sounds as good as the film has in ages. Spreading the sound around the front two speakers actually delivers a robust sound that accentuates the action-oriented aspects of the film, while delivering some surprisingly convincing atmosphere during certain sequences. The mix finds a nice balance between dialogue, sound effects, and the score by James Newton Howard.

With clear dialogue and resonant sound effects that include impressively heavy gunshots and explosions, the mix certainly delivers on the two things it most needs to. But there is a surprisingly immersive element during busy sequences that delivers a nice-sounding atmosphere that is convincingly like the busy din of a diner or the packed streets of Chicago when demonstrators are protesting loudly. The effect is good enough that when it's absent, the listener will notice the difference.

This is a surprisingly strong sound mix that delivers more than was expected.

Commentary with Director Andrew Davis and Joanna Cassidy – Davis and Cassidy give a lively commentary that discusses the making of the film, but also acts as a bit of nostalgia, as their discussion inevitably makes you realize two of the film's actors no longer work – or are unofficially retired.

Interview with Joanna Cassidy (HD, 6 min.) – Cassidy gives a surprisingly emotional interview, and recounts how pleased she was to work on the film. It's an interesting look back at a film that is made remarkable for the amount of talent working on it.

Despite its grand governmental conspiracy plot, 'The Package' is a street-level film through and through. With its workmanlike director, and its everyman leading men in Hackman and Jones (not to mention the terrific Franz), the film is a reminder that, for better or worse, movies had a different priority 25 years ago. It's not a showstopper, but an enjoyable action romp nonetheless. With a very nice image, and better than expected sound, this one comes recommended.

Sale Price 78.32
Buy Now
3rd Party 109.95
In Stock.
See what people are saying about this story or others
See Comments in Forum
Previous Next
Pre-Orders
Tomorrow's latest releases