Airplanes are not tools for war.

They are not for making money.

Hayao Miyazaki has thrilled the world for decades with wondrous, fanciful tales done in a classic hand-drawn animation style. My first Miyazaki experience, 'Spirited Away', was a bit of a revelation for someone whose only sense of anime was TV cartoons like 'Voltron'. I'm definitely still not an expert on this genre, but having missed 'The Wind Rises' theatrically, I leapt at the chance to dig into Miyazaki's last film made before retirement.

Much of Miyazaki's work takes place in fantasy worlds, often some combination of the past and wild alternate realties or afterworlds or futures. With that mind set, it's fascinating to see Miyazaki tackle a project like 'The Wind Rises', which is equal parts animated bio-pic, and classic Miyazaki fantasy world building. The story, from a linear perspective, chronicles the life of Jiro Horikoshi, a man famous for designing the Mitsubishi A5M and A6M "Zero" fighter planes, perhaps the most formidable aircraft American pilots and sailors faced in the Pacific theatre of World War II.

We meet Jiro first as a young man in a backwards pre-industrial Japan who dreams of becoming a pilot, but his short-sighted eyes won't allow it. Instead he sets out on a path to design airplanes. But not just any airplanes, the beautiful ones he sees in his dreams. In this way, the Zero is not only a terrifying and deadly war machine, but an elegant and real world interpretation of Jiro's infinite imagination.

The weaving of reality with imagination is what makes 'The Wind Rises' so engrossing. In addition to sequences of plane design and government politics and a wonderful love story with a young woman from Jiro's past, the story's most thematic and visually rich moments come in the form of dreams, where Jiro imagines conversations with an Italian airplane designer Count Caproni. Where three-winged boat planes can fly hundreds of people. Where Jiro is always chasing the design that will become the Zero, something that often seems out of reach. And much more telling about the film's ultimate intent, where Jiro can see the dark side of engineering beautiful things.

These flying, beautiful dreams are, given their expense, destined to be used as tools of war. 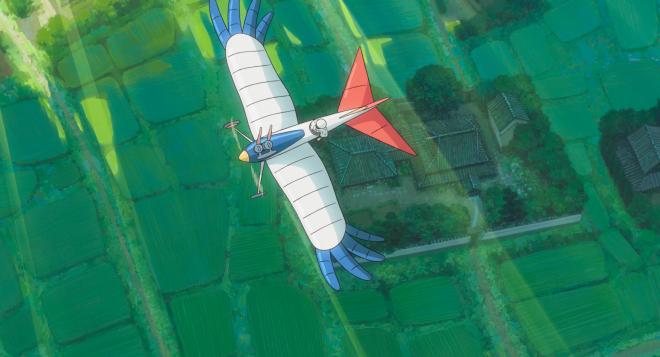 Despite a sensation that doom and ruination are in store for the Japanese people if they march down the path to war, Jiro trudges forward creating his airplanes and his perfect fighter plane. This internal struggle, and with a nice thematic balance in his love story, we see what 'The Wind Rises' asks of us all:

What happens to people when they fall in love with something that cannot last, or with things destined to fail? Is Jiro at fault for wanting to design the perfect fighter plane, even though he knows it will be used not just to protect his people, but to mow down untold numbers of supposed enemies? Is there blood on his hands?

The film seems to argue that pursuit of beauty and wonder is more important than the consequences of what men will do with these things. But at the same time, don't we all make similar choices? Very few of us will directly be responsible for creating war machines, but don't we all take jobs or start businesses that can't last forever? Form friendships and loves destined to end? Have dreams that will never be met? And yet we all push forward, riding atop a world sling-shotting around a fusion reactor in space at 67,000 mph building beautiful and awful things, falling in and out of love, and expressing our feelings about all of these complicated things in our films and television and writings.

'The Wind Rises' is a thought-provoking and challenging movie about dreams and morals and war and and love and tragedy. But it's also one of the most beautiful, hand-dawn animated movies I've ever seen. Like watching a painting come to life. Simply gorgeous. 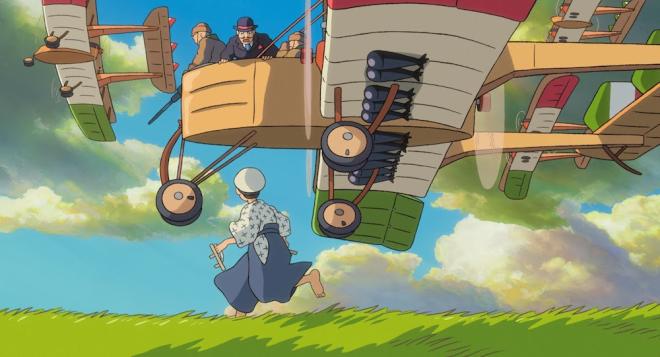 'The Wind Rises' lands in North America courtesy of Touchstone Home Entertainment as part of a Blu-ray + DVD combo pack. The BD-50 is encoded for Regions A, B, and C.

'The Wind Rises' soars onto Blu-ray with a reference quality AVC MPEG 4 encode framed in the film's 1.85:1.

As said in my review, 'The Wind Rises' is simply gorgeous, like watching a painting come to life. Colors, textures, shimmering light, and waving shadows are resplendent, almost leaping off the screen. You can see every line and brush stroke, and there are some dazzling scenes set at night and in the rain. One particularly beautiful moment involves a candle shimmering off a window in Mr. Kurokowa's home. The flying sequences and dream sequences are absolutely stunning. And I didn't see one bit of over-sharpening or digital trickery. There are no signs of macro-blocking or banding or other errors.

Hand drawn animation is the ultimate unreality. Our minds know it is created. Our eyes know it is is all fake. And yet, Miyazaki's images are so detailed and moving, these worlds start to feel real.

'The Wind Rises' takes off onto Blu-ray with the option to watch the film in the original 1.0 DTS-HD MA Japanese, or a newer 1.0 DTS-HD MA English dub.

That's not a typo. A film produced in the 21st Century was intentionally made with a Mono soundtrack. As I unwrapped the Blu-ray case, I was disheartened because of how much I enjoy surround sound. I don't know exactly what went into this choice. Perhaps Miyazaki wanted to focus primarily on the visual experience. Perhaps he thinks surround environments would be too real. Perhaps he wanted to mimic the soundscapes of this period in similar.

With those questions in mind, 'The Wind Rises' is a completely unique aural experience, blending an Italian-esque musical score with a limited, but energetic sound design. In self-constraint, the mix is wonderfully complex. When I played both mono tracks through my floor standing front channels, I could hear every detail. The voices. The music. The sound effects. Everything is so precise. And the best part? The sound effects are blended with what I can only describe as A cappella. That is, whooshing winds are like exhaled breaths and burbling propellers are vocal intonations. This is choice is a wonder, adding to the dream-like quality. It says to us, this experience is not real, but rather feels like a child letting his or her imagination run wild.

I could only imagine how insane this track could have been with all of these qualities matrixed out to eight channels or Atmos. While the track won me over in a big way, it's still a little disappointing. But this is Miyazaki's film and I respect his choice.

In terms of English versus Japanese, they are of equal quality, but offer slightly different experiences for English-only speakers. Watch the Japanese mix to enjoy Miyazaki's original direction and the unique cultural experience it is hearing the poetic Japanese language. There's a delicacy to the way the Japanese speak and interact that's much different than English speaking Americans and Europeans. But, if you do this, your eyes will be glued to words on the screen when they'd be better off enjoying Miyazaki's rich visuals. To enjoy those visuals more, check out the English dub where you get an all-star Hollywood cast that includes Joseph Gordon-Levitt, Emily Blunt, Stanley Tucci, Mandy Patinkin, William H. Macy, John Krasinki, and even a fantastic cameo by Werner Herzog. In English, the movie feels a little different, but the voices match up well, and they've managed to retain what makes the movie so special.

Finally, we must ask ourselves, how do we rate these mixes? I find myself in a little big of a conundrum. It's the first reference quality Mono mix I've ever heard, save for a lack of real LFE punch, but isn't going to blow the doors off your home cinema as demo material. In that sense, it's a 5-star audio track, but not a 5-star surround experience (it's not trying to do that) and won't line up well with other 5-star audio releases. In that spirt -- these mixes are great at what they're trying to do, but limited by their approach -- let's call this a very high four stars because reviewing movies requires picking a number, and this is solid presentation of the original source material.

'The Wind Rises' includes one special feature across all phyiscal media releases:

The Wind Rises: Behind The Microphone (HD 10:46) takes a look at producing the English dub the Hollywood actors. Definitely a short piece, but the reverence and enthusiasm they all bring to working on a Miyazaki film is refreshing.

'The Wind Rises' is a beautiful, yet haunting work from master anime filmmaker, Hayao Miyazaki. It is a visually stunning, thematic experience that asks difficult questions about art and life and death. I enjoyed it very much and expect to learn more about it with each subsequent viewing.

As a Blu-ray, it's a nice package that includes reference quality video, the best monaural audio tracks I've ever heard, almost four hours of special features, and a DVD copy. This title is highly recommended.

Sale Price 15.35
Buy Now
3rd Party 10.73
In Stock.
See what people are saying about this story or others
See Comments in Forum
Previous Next
Pre-Orders
Tomorrow's latest releases