Cy Endfield's 'Zulu' opens on a hushed, peaceful scene showing the scattered bodies of British soldiers across a vast field near Isandlwana hill. It's an ironically serene moment of silence where all we hear is the wind blowing in the tall grass and the crackling, sizzling sound of wagons burning. The camera slowly dollies from right to left with a slight pan, allowing audiences to take in the full scope and magnitude of the battle, to witness the calm after the storm just as victorious Zulu warriors walk into frame and collect rifles. Later, Endfield uses the same stagey stillness and quiet to similar effect when the 24th Regiment of Foot at Rorke's Drift finally observes their intended attackers. This time, however, the camera dollies from left to right with a slight pan and a dramatic push on Michael Caine so that we can see the astonished and terrified faces of soldiers.

This is the beauty and elegance of the 1964 historical war classic depicting one of the battles from the Anglo-Zulu War of 1879. Like the soldiers on either side of the conflict portrayed in the film, it is planned, methodical and thoughtful all at once, surging with a synergic intensity and rhythm that's brilliantly engaging from the start. The somber and grave opening establishes a preface and tone that lingers in the air, tainting every scene and conversation with the taste of impending doom. The prim and proper British soldiers are not aware of it, save for the Swedish Reverend (Jack Hawkins) and his daughter (Ulla Jacobsson), but the audience is very much mindful of an imminently disastrous battle. Endfield uses this to his advantage, meticulously building the suspense through ceaseless anticipation, delaying the inevitable eruption of gunfire mayhem.

This feeling of expectation for war is further shaped and abetted by the constant back and forth between Caine's Lt. Bromhead and Stanley Baker's Lt. Chard. Their gentlemanly banter is a rather childish, pounding of the chest power struggle that's ultimately and embarrassingly pointless, but nonetheless extraordinarily important to the plot, which Endfield co-wrote with John Prebble. Bromhead comes from a prestigious family, a proper aristocrat educated in the ways of war but clearly inexperienced and as we soon learn, preoccupied with aspiring to the heroism of his fathers. Chard, on the other hand, and thanks to Baker's exceptional performance, is a soldier who worked his way through the ranks and whose face makes public he's seen battle. Their senseless squabbling, particularly on the part of Bromhead, is, of course, soon forgotten when the thousands of Zulu warriors are understood as the greater threat. 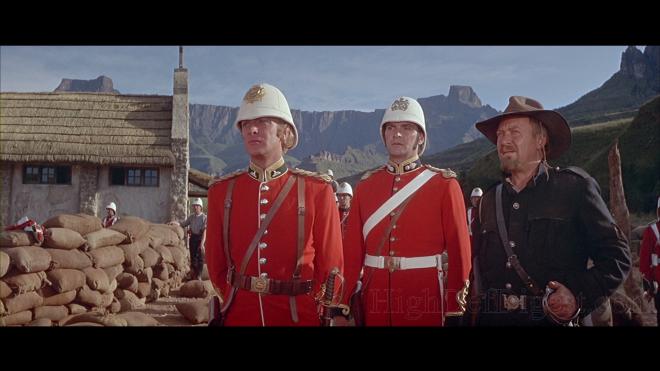 What Endfield brilliantly does with all this is a remarkably skillful balancing act of portraying the British military as both heroes and fools, of existing in that middle gray area of right and wrong, of being both the victim and the aggressor. They are originally the invading force on Zululand, as the imperialist strength with the sole intention of implementing colonial rule, making the Zulu people the oppressed defending their right to sovereignty. Fascinatingly, the way Endfield amazingly directs his film, the regiment is also on the defensive, bravely protecting their right to live in spite of being outnumbered. Handsomely photographed by Stephen Dade, 'Zulu' is a motion picture that doesn't choose sides or even attempts to, yet it wants to acknowledge the courage of the soldiers who fought at Rorke's Drift and honor their mettle — those of the British Army as well as the Zulu warriors.

Cy Endfield's 'Zulu' comes to Blu-ray as a Limited Edition release courtesy of Twilight Time. The Region Free, BD50 disc is housed inside a blue, eco-cutout case accompanied by an eight-page booklet with a thoughtful essay written by screenwriter Julie Kirgo. At startup, the disc goes straight to a static menu with the usual options.

Being a second-tier distributor, Twilight Time is subject to using whatever elements are provided to them. In this case, MGM supplies a source that is in remarkably excellent condition and could easily receive high marks if not for one disappointingly nagging issue. The 1080p/AVC MPEG-4 encode appears to be the result of minor artificial sharpening, just bad enough to create what can be mistaken for mild edge enhancement along the hills and around the buildings. The rest of the picture simply suffers for ringing around the edges of people, trees and even a few of the uniforms. This is quite unfortunate for a film beautifully photographed by Stephen Dade using the 35 mm 8-perf Technirama process, which should yield better results if given a full and proper restoration of the original elements.

Presented in 2.35:1 aspect ratio, the high-def transfer is nonetheless highly detailed with superb definition and resolution. Fine lines in the British uniforms, the Zulu warrior dress and the surrounding foliage are resolute and distinct while facial complexions are revealing with lifelike textures during close-ups. The image comes with crisp, comfortably-bright contrast showing clean, brilliant whites, and black levels are opulent and true from beginning to end with strong shadow delineation. Primaries are sumptuous and richly-saturated while earthy, secondary hues are full-bodied and accurate, providing the image with a slight ironic sense of life and energy. In the end, and in spite of the one negligible issue, the presentation is frankly the best the film has ever looked on any format.

Things improve slightly in the audio department with a welcoming and mostly exciting DTS-HD Master Audio stereo soundtrack. Also provided is the alternate monaural track from optical prints, but here, Twilight gives fans the joy of hearing the film as it was intended, from the 4-track magnetic stereo.

Although there are times when the presentation feels a bit hollow and empty, primarily due to the lack of background activity such as wildlife, the soundstage nonetheless feels broad and full of presence. The music of John Barry, best known for his work in the James Bond films, spreads evenly across the channels with excellent fidelity and separation in the orchestration, generating a wide and highly engaging soundfield. Dialogue reproduction is superb with pristine, well-prioritized vocals, allowing the listener to appreciate every emotive inflection in the performance of the cast. Dynamic range exhibits sharp, detailed highs with splendid, room-penetrating mids, providing the lossless mix with outstanding clarity during action sequences. However, the high-rez track is noticeably lacking in the low-end, making gunshots and fire feels listless and inert.

Handsomely photographed by Stephen Dade, Cy Endfield's 'Zulu' is a masterpiece about the Battle of Rorke's Drift. The 1964 historical war classic is a careful balancing act which honors the heroism of the soldiers who fought on both sides of the battle. The Blu-ray from Twilight Time arrives with a strong though slightly troubled picture quality and better lossless audio. Although featuring a terribly small set of supplements, the overall presentation is a notable improvement to previous editions.