The Shooting / Ride in the Whirlwind

In the mid-sixties, the maverick American director Monte Hellman conceived of two westerns at the same time. Dreamlike and gritty by turns, the two films would prove their maker's adeptness at brilliantly deconstructing genre. As shot back-to-back for famed producer Roger Corman, they feature overlapping casts and crews, including Jack Nicholson in two of his meatiest early roles. The films—'The Shooting,' about a motley assortment of loners following a mysterious wanted man through a desolate frontier, and 'Ride in the Whirlwind,' about a group of cowhands pursued by vigilantes for crimes they did not commit—are rigorous, artful, and wholly unconventional journeys into the American West.

In 1965, Monte Hellman was joined by a pre-mega-stardom Jack Nicholson in the red-washed wilds of Utah to make two westerns for well-known B-movie producer Roger Corman. After approximately six weeks of filming, Hellman emerged with ‘The Shooting’ and ‘Ride in the Whirlwind,’ an intriguingly elliptical set of features that eschewed many conventions of the western genre in favor of two tales wherein the remoteness of their setting and a pervasive feeling of isolation and paranoia became a representational through-line. By subverting the language of the genre and the idea of what qualities embodied the classically stoic western hero, the films made for an intriguing, elegiac, and thought-provoking double-bill that was seemingly destined to go unobserved.

As such, success within the United States was never really in the cards. Although both films were reportedly well received among French audiences (1969), neither ‘The Shooting’ nor ‘Ride in the Whirlwind’ was given a full domestic theatrical release. Instead, after being passed from one potential distributor to another, walking the wastelands of film distribution like the peripatetic men at the center of each film, the seemingly displaced features finally found a home. The result, however, was an inauspicious debut on television, effectively relegating Hellman’s work to find an audience amongst those prone to spending their Saturdays in front of the tube. But with Criterion’s new double feature release, both films may finally find a new and appreciative American audience.

Although they tell two different stories, the ‘The Shooting’ and ‘Ride in the Whirlwind’ feel inextricably linked. That feeling of sameness may well be due to Hellman’s direction on the back-to-back productions, the inclusion of Nicholson and co-star Millie Perkins, or the subtle feeling that the stories could be taking place at the very same time, with the characters being separated only by a single ridge of the blushing desert landscape. Those factors certainly add a unique level of detail, but the odd sense of a pending disaster serves both tales on a singular level as well as a shared one. 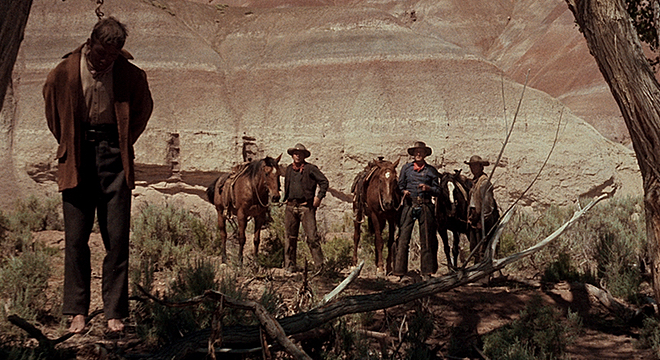 These are, in essence, two films where a portent of doom hangs mightily over the characters. ‘The Shooting,’ written by ‘Five Easy Pieces’ screenwriter Carole Eastman (under the pen name Adrien Joyce), is the stronger of the two films. Throughout its slight structure Hellman takes his characters on a journey through a seemingly endless hellscape of scorched earth, drifting sand, and craggy rocks that is more suggestive of Dante’s eschatological poem, than, say, John Wayne’s Western oeuvre.

Frequent Hellman collaborator Warren Oates (‘Two-Lane Blacktop’ and ‘Cockfighter’) takes center stage as Gashade, a beleaguered bounty hunter tasked by a nameless woman (played by Millie Perkins) with chasing down an unnamed man for unknown reasons. The vagueness of the woman’s demands and her purpose are only offset by the eagerness with which Gashade’s naïve, man-child partner, Coley Boyard (Will Hutchins), caters to her, and allows his misdirected attraction to gradually consumed him. Not long into their journey, the trio is joined by Billy Spears (Nicholson), a hired gun who obliquely confirms the woman’s plans, while forcing Billy and Gashade to go from willing (if not enthusiastic) guides to prisoners forced to track down the unknown prey under the threat of death.

While the ‘The Shooting’ is propelled by its metaphorical ambiguity, ‘Ride in the Whirlwind’ is a more straightforward affair. Written by Jack Nicholson, the story turns on a case of “wrong place at the wrong time,” when a trio of cowpokes unwittingly bivouacs at a camp run by thieves (led by a young Harry Dean Stanton), and wind up the target of ruthless vigilantes determined to see each and every last “thief” hang. Nicholson’s Wes is the antithesis of his Billy Spears character; with hardboiled lines conveying how running for his life has him missing work, he becomes the everyman, caught up in a fantastic situation. Joining Wes is Vern (Cameron Mitchell), and older cowpoke whose tired face not only bears the effects of a lifetime of hard work, but it also conveys the sorrow of becoming that which they have been mistaken for in order to survive.

As with its companion, ‘Ride in the Whirlwind’ can be boiled down to a chase film. Though the motivations and goals of the main players are much less opaque, the film, nevertheless, is rife with similar insinuations that malevolent forces will inevitably come to wreak havoc, no matter how minute or remote one’s corner of the universe may seem.

What ‘The Shooting’ and ‘Ride the Whirlwind’ add up to is a fascinating double feature that eschews many of the conventions of the western genre in favor of creating something uniquely artful and daring that makes the endless expanse of the untamed west more intense and intimate than anyone had ever imagined. 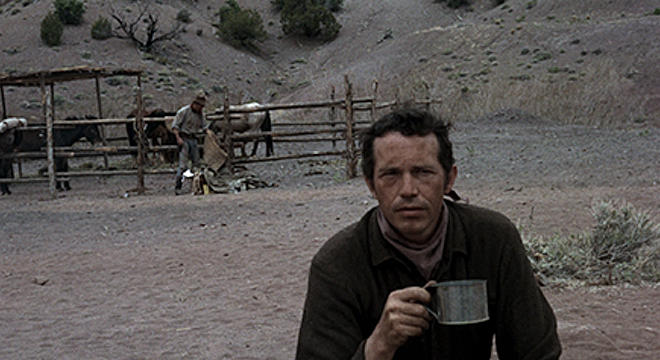 'The Shooting/Ride in the Whirlwind' comes from Criterion on a single 50GB Blu-ray disc. The disc comes in the standard Criterion keepcase with the spine numbered 734/735. Along with the disc, there is a foldout insert with various details about the disc and an essay by film critic Michael Atkinson.

'The Shooting/Ride in the Whirlwind' have been given an impressive 4k digital restoration that likely brings these films to a whole new audience looking better than they ever have before. Both images are very clear and feature a good amount of fine detail, especially in close ups. Facial features look great. Pores, fine hairs, minute imperfections are all on display. The level of detail falls slightly when the shot is a little wider, as grain and the quality of film used at the time create certain limitations even a restoration such as this can't overcome. But these imperfections, the softer focus, the aforementioned grain and even the scratches and dust – which almost seem like a deliberate part of a dreamlike sequence in 'The Shooting' – only add to the charm of both films.

Similarly, the color and the contrast fall into the good but not necessarily great category, and yet, the image's personality seems to be enhanced by those shortcomings. Color is slightly muted on both films, but primary colors like red and blue tend to stand out rather well. The ruddy earth tones of the desert hold up the best, washing every scene in browns and tans and rusty reds. Again, color is strongest during close ups, but still tends to be strong throughout. On the contrast front, blacks are strong and robust, but the films mostly favor well-lit shots, making the white balance part of the bigger issue. In this case, whites are mostly handled well, the film doesn’t appear to be running to hot, and the image doesn't look blown out, even under the scorching desert sun.

Overall, this is a very nice looking image for two otherwise forgotten films.

Both films have been given a LPCM Monaural track that handles most of the audio quite well, balancing the dialogue with sound effects and music, without any noticeable degradation of any element. Effects are generally sparse, so the monaural track doesn't have to contend with much there, and what effects are present generally come through quite cleanly, even when the score is rising, or there are many voices clamoring over one another.

There is an issue where the pitch of the voices can sound off, causing a slight distortion when actors raise their voice or begin yelling. Again, this seems to be more an issue of the tools that were available to the filmmakers, than anything to do with the re-mastering of the sound. In fact, for the most part, the audio sound remarkably well done and at certain points better than you might imagine. It's just that the issues that are present can sometimes be glaring.

The audio needs on these films are slight. Aside from a few underwhelming shootouts, the sound is comprised mainly of dialogue. It's better than average, and considering what Criterion likely had to deal with, it probably turned out a whole lot better than it could have.

Commentary on 'The Shooting' and 'Ride in the Whirlwind' - Recorded in 2014, features Monte Hellman and film historians Bill Krohn and Blake Lucas.

House of Corman (HD, 6 min.) - Hellman interviews Corman, who discusses the scripts of the two films and the Hellman's liberal use of printing takes.

The Diary of Millie Perkins (HD, 16 min.) - Hellman interviews Millie Perkins about her memory of working on both films and how Nicholson was during the filming.

Whips and Jingles (HD, 15 min.) - Will Hutchins and Jack Perlin discuss his memory of working on 'The Shooting.'

Blind Harry (HD, 3 min.) - Harry Dean Stanton recounts living with Jack Nicholson and how it resulted in Ride in the Whirlwind. Stanton talks about his approach to acting and how he prefers to play himself.

The True Death of Leland Drum (HD, 17 min.) - Monte Hellman interviews B.J. Merola and John Hacket about the story that 'The Shooting' is based on.

The Last Cowboy (HD, 17 min.) - Calvin Johnson talks to Hellman about the locations of the two films.

This is a great collection for anyone who likes westerns, but also enjoys it when the genre is subverted a little bit. These films are wonderfully dreamlike and feel like such a unique product of the '60s that they really have to be seen by any film lover. Jack Nicholson is great in both films, but it's Warren Oates' performance in 'The Shooting' that makes this Criterion worth owning. At any rate, with a great image, better than average sound, and some terrific extras, 'The Shooting/Ride in the Whirlwind' comes highly recommended.

Sale Price 27.49
List Price 39.95
Buy Now
3rd Party 16
In Stock.
See what people are saying about this story or others
See Comments in Forum
Previous Next
Pre-Orders
Tomorrow's latest releases