Overview - The story of a charismatic young Irish guitarist and a sheltered young cellist who have a chance encounter one magical night above New York's Washington Square, but are soon torn apart, leaving in their wake an infant, August Rush, orphaned by circumstance. Now performing on the streets of New York and cared for by a mysterious stranger, August uses his remarkable musical talent to seek the parents from whom he was separated at birth.
OVERALL
Give it a Rent 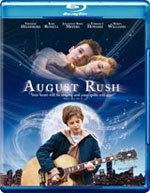 'August Rush' is nothing if not ambitious. It attempts, through the visual language of film, to convey that wonderful, immersive feeling one gets when caught up in the intangible rapture of a great piece of music. Unfortunately, this is an almost impossible task for any piece of mainstream commercial cinema to accomplish, must less one that mires itself down in narrative coincidences and soggy sentimentality. I do admire the sheer chutzpah of 'August Rush,' but it doesn't quite hit the right notes.

On paper, the fable-like qualities of the script read even more cliched than they play out on-screen (if that's possible). Freddie Highmore stars as an orphan named (God help us) August Rush. Long ago separated from his parents, he's constantly bullied at his prison-like orphanage, with his only means of emotional survival to escape into a magical world of music. Blessed with the ability to "imagine" sounds, he can create a symphony out of ordinary surroundings, from a gentle gust of wind to a ray of bright sunshine on a warm summer day. Eventually drawn to the distant musical sounds of the big city, August winds up penniless and alone, and soon to fall under the auspices of a strange local pied piper (Robin Williams), who runs a makeshift halfway house for other underage musical charges.

In the film's parallel "flashback" story, we go back eleven years to meet famous cellist Lyla Novacek (Keri Russell). After she wanders out onto an empty rooftop after a particularly unrewarding show, she spots famous local Irish singer-songwriter Louis Connell (Jonathan Rhys-Meyers). They have a meet cute, make love on the roof, and decide the next morning that they are soulmates. But Lyla's big bad father (William Sadler) thinks any potential romance will ruin her career, so he becomes the iceberg to her Titanic. Unfortunately, a freak accident (or is it fate?) puts Lyla in a coma, and it is discovered that she's pregnant -- wonder what's gonna become of that baby?

If the film's story sounds absolutely insufferable, it is. 'August Rush' is movie that never met a contrivance it didn't like, and writer-director Kristen Sheridan trots out each and every one 'em as if she was Christopher Columbus discovering America. What is most cloying and precious about 'August Rush' is it's absolute refusal to even give us a knowing wink about its own obvious manipulation of our emotions, and it's this kind of shameless pandering that I just find condescending. I suspect that less forgiving viewers than myself will probably be throwing their remotes at the screen within the first ten minutes.

But, as Sheridan proved with her Oscar-nominated screenplay for 'In America' (which was directed by her father, acclaimed filmmaker Jim Sheridan), she does have a knack for placing real, three-dimensional characters in make-believe world. Lyla, Louis and August may be stuck in a fairy tale that is annoying and contrived, but I have to admit that they soon grew on me. Sheridan is helped immeasurably by the casting, especially the very likeable Russell (who proved herself a very fine, capable actress with last year's indie smash 'Waitress'), and little Highmore, who is certainly one of the least grating child actors currently working. (Only Williams is completely wrong for his role, and delivers some cringe-inducing moments of pure ickiness -- the last act turns of the script, where the character's intentions turn darker, is an obvious and phony attempt to shoehorn in some last-minute dramatic tension.)

Another saving grace of 'August Rush' is Sheridan's fine eye for visual composition. Ironically, the film works best when it simply drops all pretense of a coherent, engaging story and meander into wordless fantasy sequences. Though there is no CGI or obvious 'Harry Potter'-like magic here, Sheridan's fine use of oblique images, and a unique merging of atmospheric effects and score with Highmore's narration, hint at the movie might of been. Perhaps Sheridan just needed to be ballsier, and gone the Julie Taymor route -- perhaps, had she just let her imagination run wild and dispensed with the stupid story, she might have delivered a film of true visual poetry.

Alas, despite its few good points, 'August Rush' just is not a very good movie. I liked most of the performances, and it is well-directed in spots. But it reeks of pretentiousness, and for most of its runtime it is just plain corny. Add to that a conclusion that's quite unsatisfying the poorly-conceived Williams character, and you have a bit of a mess. Fans of overt sentimentality might still find something to connect with in 'August Rush,' but all others, you've been warned. 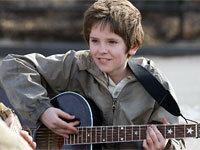 The source is as pristine as you would expect from a new release. There is slight grain but it keeps 'August Rush' film-like, which is a benefit. The cinematography makes nice use of well-saturated colors that are not overtorqued, and the palette of warm oranges, browns, and blues is very attractive. Fleshtones also remain natural (particularly close-ups, which excel). The image is always detailed, with strong depth, so I was always aware that I was watching high-def and not a standard DVD.

Unfortunately, I was bugged by a tendency to lighten up the film in the mid-range, making the transfer appear slightly washed out. Blacks are still consistent, but I longed for a bit more punch -- it's prominent enough that I was frequently distracted. To Warner's credit, there is no edge enhancement, so the image retains a pleasing realism without looking too soft. This is also a good VC-1 encode, and I noticed no major artifacts.

Befitting a film about music, Warner has not chintzed with the sound, offering up a Dolby TrueHD 5.1 Surround track (48kHz/16-bit), plus French and Spanish Dolby Digital 5.1 Surround (640kbps) options.

The film's sound design is subtle, but effective. The approach is clear from the first scene, a serene montage of naturalistic scenes, narration and lilting underscore. It doesn't hit you over the head, but the use of surrounds is well-modulated -- I could hear the sound of a slight breeze directed to specific rear speakers, and it was all nicely blended with the score. The rest of the film continues this approach, so at a decent volume level, 'August Rush' is really quite sublime. 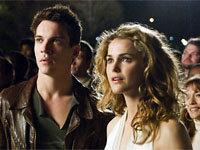 Given 'August Rush's poor box office showing, it's little surprise that Warner has done next to nothing to celebrate the film's video release -- this supplement package is about as paltry as they get.

'August Rush' is a kind-hearted, well-meaning little weepy, but dang if it isn't too precious for its own good. However, fans of movies like 'Music of the Heart' and (the far superior) 'Once' might still be inclined to check it out. As a Blu-ray release this is a mixed bag, with solid video and audio offset by a very weak supplements package. For all but the biggest music lovers, 'August Rush' is a rental at best.

Sale Price 14.98
List Price 19.98
Buy Now
3rd Party 13.94
In Stock.
See what people are saying about this story or others
See Comments in Forum
Previous Next
Pre-Orders
Tomorrow's latest releases