A bored suburban housewife, seeking adventure to her life, accidentally gets hit on the head, wakes up with amnesia, and is mistaken for a free-spirited New York City drifter named Susan.

For many, it's far too easy to quickly brush aside and dismiss 'Desperately Seeking Susan' as yet another flick given a pass, especially when looking at the number of stars awarded, for its nostalgia trip. Granted, there is some small level of truth behind that and to which I admit as very likely. After all, the 1985 film is as much a part of my childhood as something like 'The Goonies,' 'Back to the Future,' 'Sixteen Candles' and 'The Breakfast Club.' And to this day, I still find it quite entertaining. It's not like I'd go out of my way to pop it into the Blu-ray player, mind you, but if it happens to be on television, I can sit back and enjoy, killing a couple hours without regret . . . or shame. However, while revisiting the somewhat offbeat but easily digestible dramedy, sometimes while basking in the glorious sunshine of my childhood memories, I found myself taking note of the plot's ostensibly impossible perceptiveness of 1980s culture. Silly as it may sound, the movie directly had its finger on the pulse of a growing trend at the time.

Of course, given that the movie features the immensely popular and beloved megastar Madonna in a major role, that last statement might seem an obvious no-brainer. However, contrary to what contemporary viewers might want to believe, her portrayal of the titular character is not actually the lead. That honor belongs to Rosanna Arquette's unsatisfied, somewhat neurotic housewife, Roberta. Then there's also the fact that the pop star's big screen breakthrough precedes her sudden massive success. Director Susan Seidelman hired Madonna the year after the singer's self-titled debut album released, when a couple singles were just climbing the charts. The movie was in post-production when she finally became the global phenomenon we now know with her Like a Virgin album. Her role here and her sudden rise in music history is purely coincidental though it hasn't stopped some from thinking the movie is a vanity project or a deliberate vehicle meant to capitalize on her fame. The truth, as it turns out, is less than glamorous. 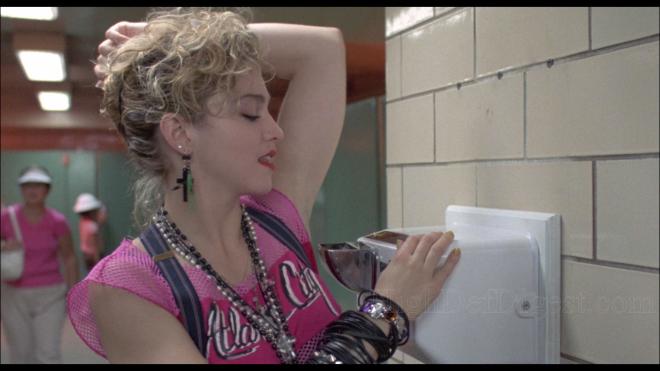 Still, the coincidence — that Seidelman specifically wanted this up-and-coming singer when producers hesitated due to her poor acting skills — perfectly reflects the point that the film was in touch with certain cultural changes and sentiments. But beyond perhaps accidentally stumbling upon a future music icon on the brink of setting the world ablaze, Seidelman chose Madonna for what she signified — a lively, rebellious free spirit without restraint, shame or responsibility, buoyantly traveling through our plane of existence making us, mere mortals, feel both disapproving of her lifestyle and also jealous of her harum-scarum freedom. Already typifying that attitude in her personal life, the pop-star brings that tone with genuine energetic brashness, cruising through her portrayal of the insouciant Susan Thomas barely breaking a sweat. She is meant to be so far in the fringe and margins of supposed civil society that she is a bitingly sharp contrast to Arquette's discontented suburbanite, who is perhaps a bit unhealthily fascinated by the mysterious Susan.

In 'Desperately Seeking Susan,' Roberta is basically us, or at least, that part of us striving for the sort of financial comfort promised by the "American Dream" ideal. The story is set just as the wealthy yuppie was on the rise, the period when excessive consumerism and the idea that happiness comes from material possessions was becoming the norm. The fairly lonely housewife is captivated by the enigmatic Susan because of cryptic messages printed in the personal ads reflected an unknown world that challenges her existence. Her only company is her absent luxury-bathtub salesman husband (Mark Blum), and her only friend is his sister, Leslie (Laurie Metcalf), who is herself on the hunt for a prosperous husband. The disillusioned Roberta doesn't so much stalk Susan as simple chase after a sense of fulfillment through a freedom from that material lifestyle. The one pesky drawback is a rather silly subplot about stolen Egyptian earrings that leads to a love-interest in Aidan Quinn and a happy conclusion. And yet, thanks to the story's stronger aspects, the 1985 dramedy continues to entertain and satisfy.

Kino Lorber brings 'Desperately Seeking Susan' to Blu-ray on a Region A locked, BD25 disc inside the standard blue keepcase. At startup, the disc goes directly to a static screen with the usual options.

Roberta and Susan don't exactly look their best on Blu-ray, but the ladies nonetheless offer an improvement over previous home video editions in this strong 1080p/AVC MPEG-4 encode. Despite the occasional scattering of white specks and dirt, the sourced used has aged quite well, showing strong resolution and excellent clarity. Several moments fall flat and dull with a tad of blooming, posterization and negligible hints of noise in the white areas. It's not too terrible since contrast is well balanced and stable, for the most part, but these are notable issues worth mentioning. Fine lines and objects are very nicely detailed and defined, but the sharpest when compared to other titles from the same period. Colors and blacks benefit the most with bold primaries, attractive pastels and deep, strong shadows. Flesh tones are often on the pale side but pleasing all in all.  The 1.85:1 image is awash with a very thin layer of natural grain, giving the high-def presentation an appreciable film-like quality.

A very desperate Susan shows off the goods in this very satisfying DTS-HD MA mono soundtrack. Being a character and dialogue driven film, much of the focus is understandably on the various conversations, which are distinct and intelligible from beginning to end, especially Patricia Arquette's emotional hysterics. There's a tad of hissing in the voices, but thankfully, it's nothing too distracting. Although the action is all contained in the center, the design nonetheless displays plenty of audible background activity, like the hustle and bustle of the city and other minor atmospherics. The mid-range is surprisingly dynamic and extensive with discrete separation and clarity although it never really pushes hard into the upper frequencies. Low bass is a genuine shocker, delivering a healthy, hearty punch and kick to the music and song selections. Overall, the lossless mix arrives with a great and satisfying sense of presence.

Although likely to be dismissed by most, 'Desperately Seeking Susan' is a surprisingly perceptive 1985 dramedy starring Madonna and Rosanna Arquette that still manages to entertain and satisfy. The Blu-ray arrives with pleasing yet average picture quality but a great audio presentation. Supplements are disappointingly lacking, but devoted fans of the 80s pop star are sure to be more than happy with the overall package.

Sale Price 7.99
List Price 29.95
Buy Now
3rd Party 24.99
In Stock.
See what people are saying about this story or others
See Comments in Forum
Previous Next
Pre-Orders
Tomorrow's latest releases