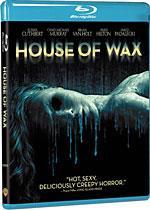 I blame 'The Texas Chainsaw Massacre.' After the 2003 remake of the horror classic scared up over $125 million worldwide, the studios rushed out to "reimagine" every last, even remotely recognizable horror title in their libraries. But funny enough, the spate of cash-ins that followed didn't so much remake the original films they were based on but simply ripped-off the style and attitude of 'Chainsaw.' Suddenly, every horror film looked grimy and dirty, with a maniac running around with a variety of power tools, hacking and slashing at a bevy of pretty, WB-ready teams.

'House of Wax' is far from the worst of this bunch, but it may be the most dispiriting, because the original 'House of Wax' could have served as the foundation for a genuinely unique, lively remake. That 1953 box office smash boasted a nifty plot, a delicious lead performance by Vincent Price, and a funhouse-like blend of mystery and scares that the new 'House of Wax' all but discards in favor of bleakness, gore and nihilism. Of course, these qualities are nothing new in modern horror, and perfectly fit with a property like 'The Texas Chainsaw Massacre.' However, with 'Wax,' such hardcore elements only serve to dilute what was so fresh about the original, which begs the question -- why remake a film if you aren't at all interested in what made it so appealing in the first place?

Since key to the plot of 'House of Wax' is who (or whom?) is doing the killing, and what exactly is going on in the small, isolated town that serves as the film's setting, I won't offer any plot recap. Suffice to say that if you have seen more than one slasher movie you know the drill. A group of teens far too attractive for a single social group are on their way to a big football game, but car trouble leaves them stranded in the Creepy Old Town that Time Forgot. Quicker than you can say, I Know What You Won't Be Doing This Summer Because You're About to Die, our pretty young cast is picked off one by one by an unseen assailant. Of course, eventually one Final Girl (the plucky Elisha Cuthbert of '24' fame) will emerge victorious, but not after all her friends are killed in spectacularly gruesome fashion, followed by the Big Twist Ending that sets up the sequel. Can't wait for 'House of Wax 2: Feel the Burn!'

Truth be told, 'House of Wax' is fun. Yes, it is totally derivative and utterly predictable. The only tension in a film like this is to wait and see who is going to get it, and when, and how. That's followed by the obligatory extended chase scene, where our heroine runs screaming through various horrifying scenarios and suffers all manner of physical tortures. Yes, there is a big revelation of the killer(s) that sparks minor interest, but it is telegraphed too early on so hardly comes as a surprise. There is also little character development, despite the film being way overlong at 113 minutes. All those tedious early scenes of the kids talking about college, bantering about sex, etc., go nowhere, and probably could have been cut by a good 20 minutes and we still would have been invested enough in the characters to care about them when they died.

Pardon the pun, but 'House of Wax' only heats up during its final forty-five minutes. At last, the filmmakers grasp what a great concept they really had, and the house of wax of the title is finally put to good use. The concluding scenes of cat-and-mouse are above-average for this type of flick, and I particularly enjoyed a clever scene in an old movie theater and the legitimately creepy unveiling of the killers' wax figure-making torture device. Okay, such are small pleasures, but we slasher movie fanatics have to take what we can get.

Lastly, no review of 'House of Wax' would be complete without mention of a certain young socialite making her major studio motion picture debut. If nothing else, 'House of Wax' is a must see for the film's one truly memorable piece de gruesome resistance, which is the much-publicized, protracted death of Paris Hilton. I never thought I'd say this, but she is actually the bright spot of the movie, so remember -- any flick featuring Paris Hilton with a spear through her head can't be all bad. 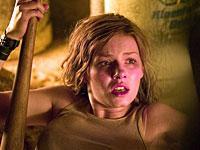 I remember seeing 'House of Wax' in the theater and being surprised how dark the film looked. Director Jaume Collet-Serra and his DPs Marc Spicer and Stephen Windo clearly aped the dank, gritty look of classic '70s exploitation cinema, smothering 'House of Wax' in shadows, grain and desaturated colors. The trick doesn't quite work, however, not only because of the changes in photographic styles over the years, but also because the film is so prefabricated it is impossible for it to look "authentic."

Anyway, I was interested to finally see 'House of Wax' in its HD DVD debut a couple of weeks back, if only to see how a next-gen format would translate such excessively dark tones. Overall, that transfer did a solid job of it, offering a decent upgrade over the standard-def DVD release. Same goes for this Blu-ray release, for aside from a ever-so-slightly darker cast (which I've found evident on most of my Blu-ray versus HD DVD comparisons), the results are identical.

Presented here in 1.85:1 widescreen and 1080p/VC-1 video as on the HD DVD, the source material is in great shape. As you would expect for a new film, there are no print defects visible such as dirt or dropouts. There is grain, especially in the darkest scenes, but it is entirely appropriate to the spirit of the film. Colors are also fairly drained of richness, though not bland. There are still instances of vibrant reds, blues, greens and rustic oranges throughout, though fleshtones often look sickly, as the entire transfer has a slight bluish-green tint. Again, this is intentional, but it does start to wear thin after a while.

However, this transfer's biggest drawback is that contrast appears intentionally flattened out -- it's as if the filmmakers, to compensate for the low light levels, lightened up the blacks to increase apparent detail in the shadows. It is not excessive, but I've seen better depth on other transfers of material that is dimly lit. Even in high-def, many sequences appear so dark it is hard to make out exactly going on, such as the early scene at the campfire, Jared Padalecki's unfortunate run-in with a pair of scissors and Paris Hilton's pre-death trek through the woods. Aside from daylight exteriors and a few of the more brightly-lit interiors, the majority of the film feels like 2-D.

Note, however, that I did check out some early reactions to the HD DVD version on various A/V message forums, where some reported blockiness and compression problems in dark scenes. Though I didn't find any such issues in my review, I was concerned about this Blu-ray version, as the more limited capacity of a single-layer Blu-ray disc means 'House of Wax' has about 5GB less space to work with this time out. Despite that, I still didn't notice any obvious compression issues or pixelization, even on the toughest scenes with fast-motion. So whatever it is they are doing over there at Warner, I hope they keep it up. 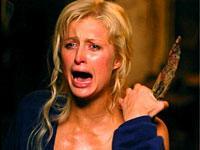 The sound design of 'House of Wax' is pretty typical for a modern genre film. Effective but not overdone, you won't be incredibly overwhelmed by a wall of sound, but it certainly gets the job done. So in this case, the Dolby Digital 5.1 surround track (encoded at 640kbps) Warner has included here is more than adequate -- I can't say a truly lossless format (such as Dolby TrueHD or DTS-HD) would have made such a huge difference.

Dynamic range is nicely rendered, with a natural and pleasing sense of fullness. Though low-budget by studio standards, 'House of Wax' is still far more polished than those old '70s slasher movies of yore, so dialogue is always clear and intelligible, and there no aural anomalies, such as scratchy high end or bad ADR to distract. Surround use is generally good, with a few atmospheric effects (such as creepy wind, outdoor noises, etc.) plus a bit of score bleed to the rears. However, the soundfield really only comes alive during the film's final 20 minutes. There are some wonderful uses of surround imaging with all the gurgling wax, and if only the whole soundtrack had been this creative it might have been really something for a horror flick. As is, a sturdy and more than listenable mix.

Porting over all of the extras from the standard DVD release, Warner has rehashed the usual EPK featurettes for 'House of Wax' on Blu-ray, just as they did on HD DVD. Thankfully, the goodies go into enough detail about the film's main selling point -- its sticky chamber of horrors -- that it makes this fluff worth watching (if only once).

The production design and mechanical effects are rightly showcased in three featurettes: "From Location: Joel Silver Reveals 'House of Wax,'" "Wax On: The Design of 'House of Wax'" and "The House Built on Wax: The Visual Effects of 'House of Wax.'" Running about 20 minutes total, aside from the Joel Silver thing which is just a short introduction, the production design of the house itself is fascinating. It is somewhat rare these days even in lower-budgeted filmmaking to see so many effects done practically without the aid of computer-generated imagery. That actually makes 'House of Wax' a pretty impressive achievement, at least on a technical level. Fun stuff.

The only other major supplement is "B-Roll and Bloopers," a weird 27-minute split-screen segment that boasts extra "video cast commentary." Unfortunately, it doesn't quite work -- the cast, including Elisha Cuthbert, Jared Padalecki and Paris Hilton, sit down to watch the blooper reel, but because they are constantly talking you can hardly hear the gags. Hilton, however, is hilarious, proving herself to be even stupider in real life than she appears on screen. In addition to claiming that the director "duped her" into a scene that parodied her famous sex tape (uh, honey, didn't you read the script?), she reveals that she is a "method actress" who had to physically exert herself in order to perform her death scene. Wow, Paris, that's like, so hard! Priceless.

Rounding out the extras is an alternate opening (called "Jennifer Killed," making it self-explanatory), yet another, shorter gag reel, and the film's theatrical trailer presented in widescreen and 480p video.

If you've gotten to the end of this review, you are either a diehard slasher movie fan or just really desperate for reading material. Either way, 'House of Wax' is far from the best or worst of the genre, just a well-made if fairly ludicrous thrill-show that lifts too readily from the recent 'Texas Chainsaw Massacre' redux for its own good. As for this Blu-ray it is a solid release, with a good transfer of problematic material, though it looks a shade darker than its HD DVD counterpart (which is notable for a film that was probably too dark to begin with). Fans also get a nice soundtrack and all of the extras from the standard DVD release. Plus, Paris Hilton dies but good, so that alone makes this at least worth a Netflix rental.