After serving 18 years, "Killer" Cain (Clint Walker) is released from prison, determined never to touch a gun again. But the only job he can get is with Dan Ruffalo's (Vincent Price) traveling sideshow as the sharp shooting main attraction. As Cain works to build an honest future free of bullets and bloodshed, his enemies look to settle old scores. Now Cain must risk his new life to become the "Killer" once more- or be haunted by his past forever.

'More Dead Than Alive,' Robert Sparr's moralistic 1969 western, starring Clint Walker (of TV's 'Cheyenne' fame) and the inimitable Vincent Price – in a non-horror role that still manages to put his unnerving persona to good use – is gripped with the confounding inescapability of both the past as well as the future. It paints a picture of the Old West on its way to being tamed that still bears the scars of its bloody and unruly days from not so long ago. It is an Old West where men still pack six-shooters on their hips, but tend to do more of their shooting as exhibits of traveling shows, than in legendary shootouts held at high noon.

Walker stars as Cain – otherwise known as "Killer Cain" – a legendary gunslinger who killed more than a dozen men since he was 16. During the film's cold open, Cain is seen passively waiting in his cell, while a daring prison break unfolds around him. As the bullets fly and more blood is spilled, Cain waits patiently, unwilling to break free from his cell – or to let his cellmate to the same, for that matter – suggesting he's not only turned over a new leaf, but that Killer Cain is truly seeking to repent for his previous transgressions.

From there, the film jumps forward in time, to when Cain is released from prison and is free to pursue a life free from violence, as he's vowed never to touch a gun again. But this newly reformed man is greeted by a world that is wildly different from the one he left behind. Although the world has changed, and Cain along with it, there's nothing he can do to erase the memories of those who only knew him as a legendary killer, whose hands were permanently stained with the blood of other men. 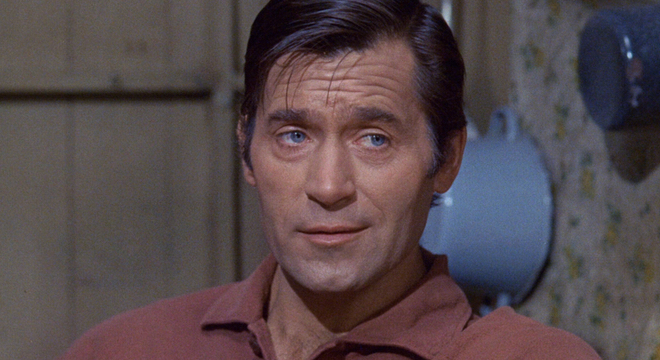 Walker is particularly well suited for the role of Cain, as his broad shoulders and chiseled jawline are accentuated perfectly by his deep, resonant voice. If ever there were to be an embodiment of the uncontrollable nature of the Wild West, it would likely reside in a body like that. But for all the intensity of Walker's physical presence, there's little in the way of true emotion in his performance. Perhaps this is what Sparr was going for, with the idea that Cain was truly a blank slate after nearly two decades behind bars, and if so, then it certainly worked. But even if that was the goal, the effect of such an effort renders Cain somewhat bland and utterly reliant on the appeal of the supporting characters in order to make him seem more engaging.

At the top of the list is, of course, Vincent Price as Dan Ruffalo, the slightly crooked owner of a traveling Wild West show that is part museum – it houses, among other notable icons of the time, the gun used by Killer Cain – and part live entertainment, with Paul Hampton's Billy Valence being the star. Valence is young, boisterous sharpshooter with deadly aim, who's never actually killed another man, but is obsessed with the notion of it. Rounding out the cast is Anne Francis as Monica Alton, a single, educated woman who came out West to paint and become the proprietor of her own business.

Monica is the film's most subversive character, as she represents the changing attitudes that the film not only tries to convey in its discussion of modernity encroaching upon the Old West, but also in terms of when the film itself was released. From the way in which she dresses to her self-sufficient demeanor, Monica is the symbol of progression the film is so keen to acknowledge. And, in a way, the same can be said for Billy Valence. The dandified man is known for his similarly unorthodox, modish style of dress, excessive self-focus and sense of entitlement, which stand in sharp contrast to not only Cain, but also what is typically thought of as the hardened, earnest men and women of the Old West.

But all the symbolism in the world can't save 'More Dead Than Alive' from its own avoidance of consistent pacing, or its inexplicable logic that keeps Cain from doing the obvious in order to find some semblance of peace. Characters will do what they will in order to keep the narrative going, but when they so clearly avoid using common sense, their adherence to the plot severely diminishes their impact on an emotional level. Cain only briefly addresses the notion of changing his name or moving away from where his crimes made him legendary. Either he was really attached to the South West, or his legend was far bigger than anyone could have ever imagined. Unfortunately, neither one makes much sense, leaving the film worse off because of it.

Ultimately, this Western winds up being a small drama with big ambitions that are simply not fulfilled by the script or the acting. In order to fulfill its aspirations, Sparr's film often subjects its audience to unnecessary preaching when it fails to effectively champion what it wants to promote. In the end, though, the film's moral core isn't the issue; it's the hectoring that is used as a last resort when the message is no longer coming through.

'More Dead Than Alive' comes from Kino Lorber as a single 25GB Blu-ray disc in the standard keepcase. There are no previews ahead of the top menu, so you will be free to choose from watching the film, or going through some of the supplemental features.

'More Dead Than Alive' has been re-mastered in HD and the results are nice, but uneven at times. The image excels during close-ups, delivering plenty of find detail in the actors' faces, in the form of pores, stubble, and fine lines and wrinkles. The sheen of sweat in the hot sun, or dirt on their faces often adds to the realism of the film in many cases. When the shots are wider, and have to deliver more information, there is a noticeable drop in the amount of detail. Grain also becomes more prevalent during these scenes, which plays a role in the decline of detail. Still, the image looks good, and there are only a few instances where the image seems to have been damaged or came from an inferior source.

Color is generally very bright, offering a broad spectrum that will be pleasing to most viewers. The image succeeds in playing up sky's bright blues and the reddish tones of the desert. Flesh tones tend to run a little redder than normal, but for the most part look good. Contrast is also nice and even throughout. Blacks are mostly dark and rich – though they could be darker in some places – while whites seem to be balanced throughout.

This is an above average presentation for a film that has likely gone by the wayside for many viewers. There's a good chance this will be the best looking version many people have seen.

The DTS-HD Master Audio 2.0 mix delivers strong audio and a sharp sounding score, but skimps when it comes to fisticuffs and gunfire that are essentially this film's bread and butter. Dialogue is clear and easy to hear. It offers a dynamic scale that makes Walker's baritone voice sound compelling, but also keeps Hampton's voice from being too shrill or tinny – though there are times when that simply can't be avoided.

The musical score resonates well throughout the film, with the balance doing a nice job of making room for the actors when need be. The score is rather dynamic and suggests a deeper sounding mix than what was presented. Unfortunately, sound effects are hollow and anemic for the most part. Gunfire is often dull or muffled, while the sound of punches or boards breaking over the backs of men pack all the power of a pillow fight.

Still, the mix gets right what's most important, but it would have been nice if this action film could have delivered the sound of action in a more compelling manner.

"The Infamous Killer Cain" – Interview with Clint Walker (HD, 10 min.) – Clint Walker gives an insightful and candid interview about his thoughts on the film, and his role in it. He expresses displeasure at the title, and still thinks that the film's ending is one of the most shocking he's ever seen.

'More Dead Than Alive' features some compelling ideas on the nature of good and evil, and the notion of forgiveness, but they are often muddled by unconvincing conceptions of celebrity that are intermittently woven into a tapestry that seems primarily concerned with progression. Although it boasts a competent cast and Vincent Price is great, Walker's stoicism can sometimes be mistaken for blandness. The re-mastered image is better than you'd expect, but not great, and the sound could have done more for the action sequences. Still, if you're in the market for a Western, this one is worth a look.

Sale Price 44.99
Buy Now
3rd Party 44.99
In Stock.
See what people are saying about this story or others
See Comments in Forum
Previous Next
Pre-Orders
Tomorrow's latest releases