By the end of 'The Dark Half,' after our hero inevitably and predictably defeats the evil varmint terrorizing his family and threatening his way of life, viewers are left with one lingering, nagging question. Well, that is, after also pondering, "What the hell did I just watch?" I suppose that makes it two queries audiences will likely wonder the moment credits roll and suddenly realize the movie simply ended without much of a denouement. That may sound like the inroad towards negative criticism, but on the contrary. I rather like George A. Romero's adaptation of Stephen King's novel. I just find it curiously funny that by the end, I was left wondering how Michael Rooker's character, Sheriff Pangborn, will clean up the mess, writing a police report that logically and evidentially explains the long line of dead bodies. Did some paranormal entity, born of the imagination of a fiction writer, manifest himself to commit murder?

Actually, that seems as good a starting point as any for reflecting on the production's favorable aspects. Aside from Rooker's baffled sheriff of a tiny sleepy town whose loyalty to the hero is endlessly tested, we share in his desperate need to understand how anything in this bizarrely twisted tale makes much sense. And amazingly, that's not a bad thing, instead working to its favor because the plot's weirdness challenges audiences. Not on some deep metaphysical, existential rigmarole, but on a basic and fairly straightforward level that functions as a larger metaphor about the writing process, the power of imagination and the art of creation. Viewers are continuously left questioning the innocence, along with the mental health, of our protagonist, Thad Beaumont (Timothy Hutton). Or at least, we are for much of the movie's first half because evidence gathered at each crime scene points to him, from fingerprints to reasonable motive. 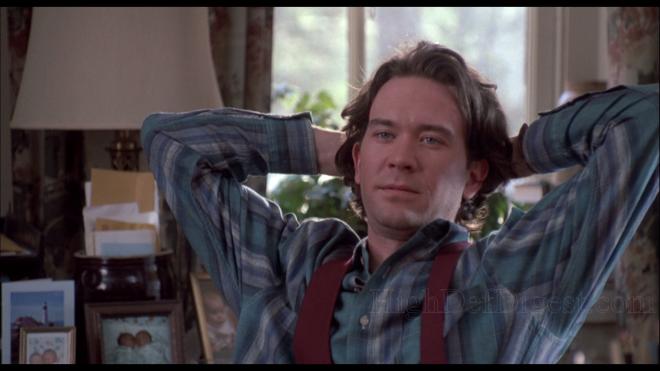 This part of the tale is intriguing, especially after a beginning showing a preteen Thad with aspirations of being a writer plagued by seizures and discovering a parasitic twin residing in his brain. Of course, the guessing-game is soon over once we are introduced to the concept that Thad's p pen name author, George Stark (also played by Hutton), has taken a life of his own following a publicity mock burial. Fascinatingly, the story endures without missing a beat, and much of this is in large part due to Hutton's performance, pulling double duty alternating from kindly, considerate family man to a disturbingly dark, sadistic maniac. The makeup, hair and clothing, I'm sure, have a great deal to with his transition, but Hutton does depraved human surprisingly well. Even as Thad, he amplifies suspicions when delivering seemingly mild threats with some small conviction and a hint of smirk, as if he could transform into Stark and capable of killing.

Stephen King was inspired to write the story after his own pseudonym, Richard Bachman (Thinner, The Running Man), was revealed by a bookstore clerk in the mid-eighties. This little tidbit makes for good analysis because one can imagine the famed horror author struggling with some inner demons, sharing thoughts and philosophies about creating fictional characters that sometimes feel real to the person creating them. More shocking is the fact that King turned these ideas into an entertaining thriller, even though the explanation for how exactly Stark came into corporeal existence is complete phooey. And how sparrows play into all of it ultimately helps for nothing except to give genre fans a very graphic and gory death scene that while satisfying, still leaves us to wondering how Rooker's sheriff will explain in the end. Working from a script the director co-wrote with Paul Hunt and Nick McCarthy, Romero's 'The Dark Half' is true to its source and like the novel, delivers an engaging thriller.

Shout! Factory brings 'The Dark Half' to Blu-ray under the distributor's Scream Factory line. The Region A locked, BD50 disc is housed inside the normal blue case. At startup, the disc goes to an animated menu with full-motion clips and music playing in the background.

Romero's horror thriller adaptation materializes on Blu-ray with a very nice-looking AVC-encoded transfer that outwits previous releases. However, the picture does come with its share of very minor, mostly negligible issues, such as bits of dirt and tiny scratches that could be easily missed. There are also a couple moments of softness and blurriness, likely related to the source material used. Nevertheless, the elements appear to be in great condition, showing excellent details throughout the 1.85:1 image with several daylight sequences looking particularly excellent. Contrast tends to run a tad on the hot side, creating a bit of posterization and light blooming in a few spots. Black levels are accurate and true while a fine layer of natural grain provide a film-like quality, and colors are full-bodied with bold, cleanly-rendered primaries.

The sparrows can be heard flying thanks to an excellent DTS-HD Master Audio soundtrack, offered here in either 5.1 surround or in 2.0 stereo, the latter of which I believe truer to the original design. However, just for kicks, I found myself listening to the former and was surprisingly pleased by it. In either variation, imaging feels broad and interestingly spacious with convincing off-screen effects and fluid, well-balanced channel separation. Dynamic range is extensive with lots of clarity and details in the higher frequencies and distinct, lifelike acoustics throughout. In surround mode, a few atmospherics in the rears satisfyingly expand the soundfield with good, subtle bleeds from Christopher Young's original score. Low bass doesn't offer much, but it's adequate for the genre and its age.

Based on the Stephen King novel of the same name, 'The Dark Half' is a rather bizarre tale about one author's alter ego coming to life, murdering the people around him and threatening his family. Director George A. Romero does a great job behind the camera, making the original plot and concept an intriguing commentary and allowing Timothy Hutton to really shine in a dual role. The Blu-ray arrives with very good picture quality and slighter stronger audio. With a nice assortment of supplements to boot, the overall package is worth the price for Romero and King fans alike.