There are arguably many different level of badness in movies, ways of ranking and judging them, from production values and the technical aspect to the acting and the screenplay itself. Adhering to such strict standards, however, moviegoers can and very likely will miss out of some wildly fun and diverting features too quickly deemed "garbage." One needs to learn to find enjoyment in the badness because frankly, the industry churns out more bad than good in any given year. And I'm not just pointing fingers to the usual offenders and easy targets, like the already-stale and worn-out "found-footage" subgenre, the endless remakes or so-called reimaginings, or simply the sheer lack of creativity and originality as of late. Every decade in the history of cinema has its share and collection of badness, but we sift through the manure to seldom uncover hidden gems, to truly and genuinely suspend disbelief and allow ourselves to be entertained.

Although I could easily list hundreds of other titles that fall under this category, 1987's little horror ditty 'Dolls' is evidence enough for sitting back and reveling in the low-grade shoddiness. And a big part of that comes from the utterly hilarious absurdity of homicidal antique dolls coming to life and vividly slaughtering stodgy, unappreciative and oppressive grown-ups who forgot how to have fun with their imagination. The how and why goes largely unexplained, except for one minuscule hint that the owners of this vast collection of toys (a delightfully creepy Guy Rolfe and Hilary Mason) are probably witches who still love playing and making dolls. To be fair, the low-budget production is intended as a straight-laced horror flick with fantasy elements and very cool for the period special optical effects. But there are also many comedic undertones sprinkled throughout, much of it placed in the capable hands of Stephen Lee as jolly man-child Ralph. 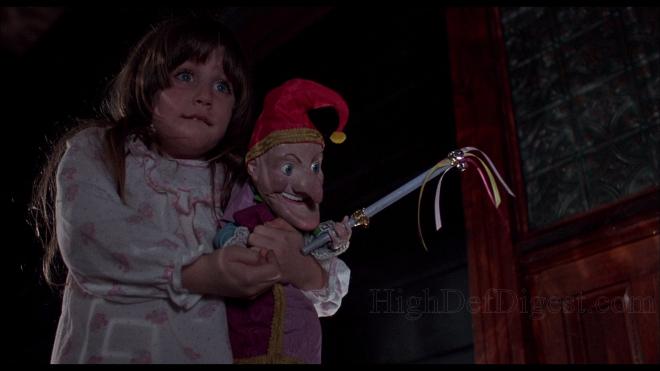 Although not meant for providing humor as much as a dramatic emotional center appealing to the audience's sympathies, Ralph's counterpart — or if one prefers, his fellow adventurer — is pint-sized Judy Bower (an amusing Carrie Lorraine). And she's an awesome little kid with an overactive imagination, which as the movie demonstrates is not a bad thing but a perfectly healthy part of life. In the first few minutes, we're introduced to her selfish, belittling, deadbeat of a father (Ian Patrick Williams) and his repulsively vile wife (Carolyn Purdy-Gordon), who has the wicked stepmother vibe down pat and can teach a few Disney witches a thing or two. Then, we're given a taste of Judy's boisterously nightmarish daydreams as her teddy bear suddenly grows ten-feet tall with gnarling teeth and butchers the uncaring parents. This sets up later doubts when adorable Judy warns every one of the killer toys after witnessing thieving punk rock hitchhikers (Bunty Bailey and Cassie Stuart) knocked off.

Filmmaker of B-movie shlock throughout the 80s and 90s, director Stuart Gordon is surely best known for the manically over-the-top gorefest 'Re-Animator' and the bizarre visual trip 'From Beyond.' Probably to a lesser degree, he is also remembered for the Christopher Lambert vehicle 'Fortress,' the off-the-wall sci-fi comedy 'Space Truckers' and the H. P. Lovecraft-inspired 'Castle Freak.' But for me, 'Dolls' is a surprisingly delightful shocker that ranks along Gordon's better-known features. From a script by journalist and author Ed Naha, the film quickly unites the characters inside an English countryside mansion on a dark, stormy night, an amusingly deliberate gothic atmosphere which Gordon runs wild with. The special effects are understandably dated, but their quaintness is part of the movie's charm and adds humor to the plot's silly notion of maniacal dolls come to life. And the creepy merriment hits a high when we discover what lies behind those innocent-looking porcelain faces.

Shout! Factory beckons 'Dolls' to Blu-ray as a Collector's Edition under the distributor's Scream Factory line. The Region A locked, BD50 disc is housed inside the normal blue case with brand new reversible cover art and a cardboard slipcover. At startup, the disc goes to a menu screen with full-motion clips while music plays in the background.

The dolls come out to play at night with a strong, highly-detailed 1080p/AVC MPEG-4 encode that'll stir fans' nightmarish imaginations. Although the source shows clear signs of wear and tear with the usual culprits, such as a couple poorly-resolved sequences, negligible scratches and the occasional white specks, the overall presentation is very well-defined with clean, fine lines in the vintage-looking dolls and the creepy antique furnishings of the house. Facial complexions are revealing with healthy skin tones, and colors are boldly rendered and energetic. Presented in its original 1.85:1 aspect ratio, the high-def transfer comes with crisp, spot-on contrast and deep, full-bodied blacks throughout.

Customary to most Scream Factory titles, Stuart Gordon's horror shocker comes with a generally good pair of listening options: a spiffy 5.1 remix and a more satisfying stereo soundtrack. Though sadly, in either case, the DTS-HD MA soundtracks come with a strange, off-balance effect where much of the action gravitates to the left. In the newer upmix, the track has a bizarre echo that has vocals spread across the entire soundstage and ambient effects in the surrounds feel largely artificial and forced. The lossless stereo mix, although still weirdly off to one side, is the better choice with a clean, distinct mid-range and adequate, accurate bass. Unfortunately, the off-balance strangeness in both is slightly less than satisfying despite vocals remaining intelligible.

Although most will quickly jump to 'Re-Animator' as Stuart Gordon's best movie, which I would never argue against, 'Dolls,' in my book, belongs right up there as one of the director's strongest features. Quirky and somewhat lighthearted, the B-movie tale of murderous dolls comes with its share of silliness and creeps that is wildly entertaining. The Blu-ray arrives with great picture quality but not a very satisfying audio presentation. Nonetheless, with a nice but small assortment of supplements, the overall package is worth a look and makes a good addition to the cult collection.

Sale Price 109.95
Buy Now
3rd Party 109.95
In Stock.
See what people are saying about this story or others
See Comments in Forum
Previous Next
Pre-Orders
Tomorrow's latest releases