Global superstar Dwayne Johnson delivers an unforgettable performance as the mighty Hercules in this thrilling story of strength, courage and heroism. When a terrifying new enemy threatens the innocent, Hercules and his fearless team of warriors must lead their army in a battle against overwhelming odds.

Brimming with larger-than-life spectacle, sensational sights of hand-to-hand battles and teeming with breathtaking visual delights, 'Hercules (2014)' is the standard Hollywood blockbuster perfectly designed and intentionally manufactured for the summer action season. It stars Dwayne Johnson and is directed by Brett Ratner, who is currently poised to helm the next 'Beverly Hills Cop' installment with much nervous chagrin from fans, and that in itself should be enough to set audience expectations. Mixed feelings of disappointment, pleasure, mild boredom and enthralled excitement swirl about and confound reactions because the production somehow manages to both satisfy those expectations and turn out to be a letdown for delivering exactly what we've come to expect. Other than a clever twist to the classical mythology of Zeus's powerful son, the movie offers very little outside of decent, action-packed entertainment.

Loosely based on the graphic novel by Steve Moore, the story follows the legendary muscular hero as a mere mortal rather than the fabled son of a god with supernatural strength. Playing the whole "you don't know the real story behind the legend" mantra to its full, almost exhaustive end, this Greek myth is a hired mercenary for any king with very deep pockets and a man who can be injured — and he is physically, emotionally and also psychologically by the end of the second act. An always charismatic persona mostly delivering his expressive range with his angrily-squinting, deadly-serious brow, Johnson clearly enjoys the role, practically relishing in the opportunity of bringing a different angle to a well-known story and pleasingly chewing up the scenery. Although his backstory of deceased family and aspirations for retiring into pastoral peace is typical warrior stock characterization, the former TV personality breathes life and likeability into a familiar, well-established character audiences can cheer. 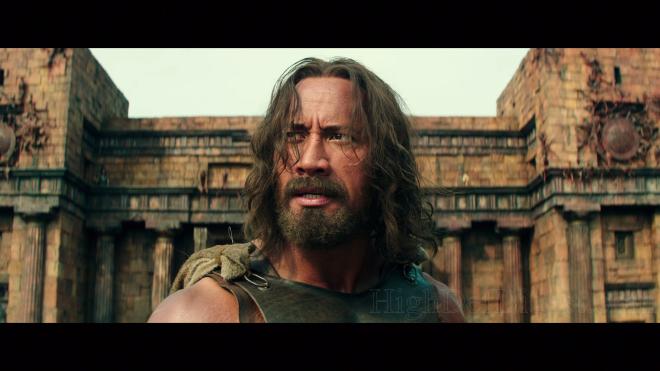 Sadly, the same can't be said of his troupe of wounded soldiers, each with a history of their own, and who follow Johnson's Hercules scrounging for the star's limelight scraps. The only standout is Ian McShane's fortune-telling seer slash fighter Amphiaraus, interjecting with humorous comments and a funny storyline that has him pausing and outstretching his arms in hopes of his fateful death. As for the rest of the cast, one can easily imagine Ratner hiding off camera giving each actor specific directions. To John Hurt's Cotys, King of Thrace, the usually reliable actor is practically instructed to simply alternate between looking sad, shocked and suddenly the angry tyrant. Rufus Sewell is tasked with seeming in-charge and appear a tough knife-throwing rogue while Ingrid Bolsø Berdal is a lethal but pretty archer in the background, Aksel Hennie is speechless animal-like barbarian and Joseph Fiennes is told to be as annoyingly flamboyant as possible without somehow also seeming offensive.

Amazingly, the entire production comes together in the end and delivers the sword-and-sandal fantasy goods. Well, as long as one is generally satisfied with the standard formulaic Hollywood blockbuster, then Brett Ratner's 'Hercules (2014)' won't likely disappoint too much. For anyone familiar with the original mythology, this story provides a couple twists paralleling the classical tale. The final half hour is of particular note where we see a mere mortal man become the legend we know, battling Cerberus and breaking free of chained captivity. In fact, I would go so far as to suggest that the climactic fight saves the film from being an abysmal failure and is most satisfying, engaging and terrifically entertaining. Up until that point, audiences are made to plod through a exhaustingly deliberate effort to conceal the obvious — and inevitable — betrayal. Nonetheless, excellent stage production, sensational battle sequences and plenty of visual delights satisfy expectations when nothing better is available.

Paramount Home Entertainment brings 'Hercules (2014)' to Blu-ray as a two-disc combo pack with a flyer for an UltraViolet Digital Copy. The Region A locked, BD50 disc is housed inside a blue eco-vortex case with a DVD-9 on the opposing panel and a glossy slipcover. Both the 98-minute theatrical version and the 101-minute extended cut are contained on the same disc. The three-minute difference doesn't add much, as it is minor and mostly negligible bits of dialogue. At startup, viewers are taken to an animated menu screen with music playing in the background.

'Hercules' flexes his muscles with a strapping and highly-detailed 1080p/AVC MPEG-4 encode that bursts with lots of beauty and spectacle. The impressive and stunning photography of Dante Spinotti really shines on Blu-ray, oozing with a striking array of colors. While secondary hues paint the screen with richness and warmth, sumptuous primaries delight with rich, vibrant reds, lively greens and animated blues, creating a visual display of enchantment and beauty. With crisp, spot-on contrast providing clarity into the far distance and deep, penetrating blacks that offer the frame with appreciable dimensionality, the 2.40:1 image shows distinct, fine lines in clothing, foliage and various Greek buildings. Facial complexions appear natural with revealing, lifelike textures throughout. Keeping the video from perfection are a couple mildly softer sequences and a couple negligible sights of aliasing along stairs, but otherwise, the Brett Ratner sword-and-sandal fantasy flick is excellent.

The legend continues the excitement with a muscular and powerful DTS-HD Master Audio soundtrack that rumbles and roars with exhilarating action. Utilizing the entire seven-channel soundscape, arrows fly whiz by and overhead from front to back with fluid ease and panning, hitting their mark in the back with fantastic, seamless directionality. The rears are employed even during quieter scenes, filling the room with subtle atmospheric effects that create a wonderfully immersive experience. However, several moments are noticeably and awkwardly silent or sadly very front-heavy. Nonetheless, dialogue remains splendidly prioritized while a very broad and expansive soundstage engages with a sharp, extensive mid-range, allowing for rich, detailed clarity in every action sequence and excellent separation in Fernando Velázquez's score. A mostly satisfying bass thunders with heavy, weighty realism though it never plunges into the ultra-low depths, making this a highly-enjoyable lossless mix that fans and the curious will relish.

What could have been a complete bomb actually delivers precisely what one would expect from a summer blockbuster like 'Hercules (2014).' Starring Dwayne Johnson and directed by Brett Ratner, the sword-and-sandal fantasy flick is decently entertaining and pleasing, particularly the climactic battle, while amusingly reimagining a classic Greek mythology. The Blu-ray arrives with an excellent, near-reference audio and video presentation that will make fans very happy. With a healthy collection of supplements, the overall package makes for a satisfying rental.

Sale Price 7.46
Buy Now
3rd Party 2.19
In Stock.
See what people are saying about this story or others
See Comments in Forum
Previous Next
Pre-Orders
Tomorrow's latest releases