The Cabinet of Dr. Caligari

With its strikingly bizarre and freakishly unusual stage design, Robert Wiene's silent horror thriller 'The Cabinet of Dr. Caligari' continues to astound and mesmerize ninety-five years later, easily earning the distinction of being the first and probably the oldest cult classic cherished by enthusiasts to this day. It's a surreal, nightmarish existence set in a world almost forcefully simulating an idea of contemporary time, like a desperately pleading attempt to cling to slowly fading, distorted memories of reality. The dazzling abnormal production work of Walter Röhrig, Walter Reimann and Hermann Warm create a glimpse into the imagination of insanity, the perception and point of view of the world as seen through the eyes of a madman, hinting at questions of our own understanding of the real. Sharply angled and slanted vertical lines make up the majority of buildings and homes, which lean too far to one side as if about to collapse at any moment. Roads are uneven and canted making a humble stroll appear challenging while walls and mountains seem pointed and jagged.

This uniquely weird look has made the simple story of a crazed hypnotist and his sleepwalking tool of murder into one of the most memorable motion pictures of all time. Even if one has never actually seen the film in its entirety — the original 77-minute version wonderfully preserved here thanks to Kino Lorber and the F.W. Murnau Foundation — its immense influence on cinema, particularly to the horror genre and the film-noir style, is undeniable and can be seen in anything from television and advertisement to contemporary movies and music videos. It's not the first or last feature to combine horror tropes with the highly-styled art design known as German Expressionism, but it has grown into the most notable and haunting archetype of this brief movement in cinema. It has since its 1920 theatrical run seeped itself into our cultural consciousness, feeding our dreams with phantasmagoric visions of how we perceive fiction and reality. Wiene uses this to set an atmospheric tone and mood that immediately, almost naturally puts his audience on edge with apprehension, feelings of a familiar world that's off balance and confused. 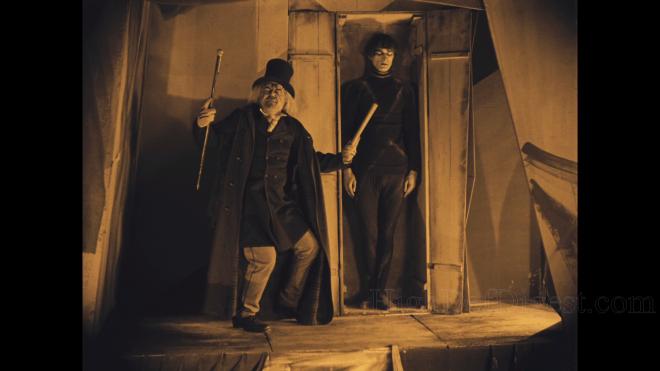 With all that said and done, the larger question at hand remains: is there a purpose and reason to the film's unforgettable eccentricity? After all, there clearly appears to be some deliberate intentionality behind the stylized madness, and the truth is the classic film has been endlessly studied and interpreted many times over since its release. The best, lasting and arguably most immediate analysis is a theme on the mistrust and fear of authority figures which examines the intriguing relationship of the mysterious Dr. Caligari (Werner Krauss) and his somnambulist Cesare (Conrad Veidt). After WWI, many of the Weimer Films thematized a concern and distrust of government forcing its tyrannical will upon citizens, eradicating individual rights through panic and intimidation. The demented Caligari represents such a figure, but only when his true identity and position in the social hierarchy are revealed. Cesare, however, stands in for the rest of society, but more specifically as the willing soldier voluntarily abandoning a sense of morality and unquestionably following orders to kill.

This wonderfully interesting reading of 'The Cabinet of Dr. Caligari' ties in perfectly with another commonly understood theme, and which sadly, somehow appears to be a current trend in American politics of late. It's the concern with the breakdown of the line between reality and the delusional, of the strangely hypnotic powers of those authority figures demanding blind obedience through fear mongering. This only becomes apparent after the film's much-celebrated and dissected twist ending, which, of course, I won't reveal here just in case there are a few who have yet to watch this mesmerizing piece of art. The nightmarish stage design also reflects this question on our perception of reality. When the opinion and point of view of our understanding the world can be so easily manipulated and exploited because of a tendency to rely on our emotions and beliefs over logic and facts, how do we truly ever know what's real? Wiene refuses to answer or quell that question, instead leaving his audience with more feelings of uncertainty and anxiety in the closing moments, making this a magnificently masterful work of cinema that continues to intrigue.

Kino Classics brings 'The Cabinet of Dr. Caligari' to Blu-ray on a Region A locked, BD50 disc inside the standard blue keepcase with a cardboard slipcover. The package includes an insert featuring a fascinating essay by film theorist, historian and professor Kristin Thompson. At startup, viewers are taken directly to a menu screen with full-motion clips and music.

The somnambulist Cesare awakens for the first time to a high-def world with a striking and gorgeous 1080p/AVC MPEG-4 encode. According to a white text screen at the start, the video was made from an extensive restoration effort of the original camera negatives. Using various other 16mm and 35mm release prints from around the world, the silent horror classic has been returned to its original glory with magnificent results. Of course, the occasional vertical scratch, white spot and specks of dirt creep up in several spots, but they are easy to forgive, giving the presentation a welcomed film-like appearance that only adds to its charm.

Presented in its original 1.33:1 aspect ratio, the image shows excellent detailing in the costumes and the furniture. We can see each smudge and stroke of the paintbrush in the bizarre, expressionist stage design, make out the tiniest imperfection and spot on the walls. Close-ups of faces are quite revealing, even beneath the thick, heavy makeup, exposing pores and wrinkles in the cast. Scenes switch color tones to reflect the time of day, lighting conditions or meant to express a particular mood, and they look fantastic. Contrast is well-balanced and crisp, and brightness levels are deep and strong while the detail in the shadows to be plainly visible. Altogether, the film finds its way to Blu-ray with a magnificent presentation.

The Kino release continues to surprise with a pair of excellent DTS-HD MA stereo soundtracks that should please and astound any listener.

The first is a beautiful orchestra rendition by the Studio for Film Music from the University of Music, Freiburg, and the second is a contemporary interpretation by Paul D. Miller, who is better known as experimental hip-hop musician DJ Spooky. Both tracks display exceptional fidelity and warmth as they spread evenly across the entire soundstage. Dynamic range is precise and extensive, reaching into the higher frequencies with brilliant, distinct clarity and detail without the slightest hint of distortion. Low bass is surprisingly deep and throaty, most apparent during the pieces with cellos, drums and when the lower keys of the piano are struck with force. In DJ Spooky's version, of course, the low-end is a tad subtler and digs slightly deeper for creating a very ominous effect. Personally, I found myself really enjoying the latter lossless mix over the other, simply because it was unusual and offbeat, but, in either case, fans will likely love both track and either one is a fantastic complement to the visuals.

With its strikingly bizarre and freakishly unusual stage design, Robert Wiene's silent horror thriller 'The Cabinet of Dr. Caligari' continues to astound and mesmerize ninety-five years later, easily earning the distinction of being the first and probably the oldest cult classic cherished by enthusiasts to this day. The dazzling abnormal production work of Walter Röhrig, Walter Reimann and Hermann Warm create a surreal, nightmarish existence set in a world that hypnotizes as it instills fear. The Blu-ray from Kino Classics arrives with a stunning and immensely entertaining audio and video presentation sure to please and surprise. With a decently nice collection of supplements, the overall package is recommended, one that definitely belongs in any cinephile's collection.

Sale Price 19.99
List Price 29.95
Buy Now
3rd Party 13.41
In Stock.
See what people are saying about this story or others
See Comments in Forum
Previous Next
Pre-Orders
Tomorrow's latest releases