Overview - Bruce Willis and Samuel L. Jackson star in a mind-shattering, suspense-filled thriller that stays with you long after the end of this riveting supernatural film. After David Dunn (Willis) emerges from a horrific train crash as the sole surivor -- and without a single scratch on him -- he meets a mysterious stranger (Jackson). An unsettling stranger who believes comic book heroes walk the earth. A haunting stranger, whose obsession with David will change David's life forever.
OVERALL
Worth a Look

Divisive director M. Night Shyamalan has steadily fallen out of the industry's good graces since his debut dark horse 'The Sixth Sense' unexpectedly took the world box office by storm in 1999. His descent from Hollywood's Next-Best-Thing to its Blew-It-Director began with 'Unbreakable,' a dark deconstruction of comicbook mythology that split fans and critics alike. Some loved the film's use of the ordinary to explore the extraordinary; connecting to the concept of a regular Joe discovering his inner superhero. Others despised its pacing and characters, complaining that the film collapsed under the inflated weight of the director's newly engorged ego. To be honest, when I first saw the film in theaters, I walked away shaking my head - at the time, it struck me as one of the worst films I'd ever seen. I've avoided the flick ever since, but decided I should give it another go before trashing it with eight year-old memories.

Elijah Price (Samuel L. Jackson) is a broken man. Born with a rare genetic defect that severely weakened his bones and made him prone to injury, he spent his adolescence escaping into comic books and their fantastic worlds of good and evil. Even now, as the owner of a comic-art dealership called "Limited Edition," Elijah spends his days searching for the existence of the very thing most people assume to be a fairytale -- a superhero. But when a stadium security guard named David Dunn (Bruce Willis) emerges as the lone survivor of a horrific train wreck, Elijah begins to suspect David may just be superhuman. David has never been sick, has a keen awareness of evil intentions, and he seems to be impervious to injury. At first, David scoffs at Elijah's theories and retreats to focus on repairing his strained marriage with his wife Audrey (Robin Wright Penn) and his troubled relationship with his young son Joseph (Spencer Treat Clark). But as Elijah continues to press the issue, and his son starts to believe in the impossible, David begins to wonder if Price's theory could be correct.

I'm really glad I gave 'Unbreakable' another shot. Don't get me wrong, I still have some fundamental problems with the structure of the film, but I found myself appreciating its performances and tone far more than I did when it was released in 2000. While Bruce Willis has always been one of my favorite actors, he really shines here, with a disquieting performance as a failing family man faced with tremendous self doubt and insecurity. His uneasy glances and defeatist attitude made me feel genuine sympathy for the allure and fear that come with his newfound abilities, but it's his transformation into a hero that seals the deal - Willis plays his ultimate awakening with the calm demeanor of an actor who understands that the power of a performance is in its subtleties. The scene where he slides a newspaper across the breakfast table to his despondent son sent chills up my back. I'm not a theater clapper, but I slapped my hands together and grinned when his son read the headline and had a palpable moment with his father.

Samuel L. Jackson's performance also resonated with me. I think his bizarre portrayal of Elijah Price was one of the first things that turned me off when I saw 'Unbreakable' so many years ago, but knowing the extent of his character arc made his actions more plausible and meaty. I still found myself cringing at some of Shyamalan's script work (I winced when Elijah gave a speech connecting Egyptian hieroglyphics to modern comics), but Jackson's performance manages to elevate the most ludicrous ideas in the script and ease my concerns with the director's decisions. My knowledge of the film's "Patented Shyamalantastic Twist Ending" made everything about Elijah easier to digest and, as a result, easier to embrace.

Alas, Shyamalan is his own worst enemy. The man knows how to shoot a gorgeous film, but he doesn't know when to reign his writing in and rely on the intelligence of his audience. For every intriguing piece of storytelling or character development, there's an inexplicably dim-witted scene that undermines the rest of the film. These disruptive moments range from the unintentionally funny (Elijah being kicked out of a comic shop in a wheelchair) to the awkwardly melodramatic (I still can't wrap my head around the point of Joseph's sudden pistol-waving leap to lunacy). But ultimately, it's the ending that really undermines the power of 'Unbreakable.' While I dig the ultimate twist, Shyamalan follows it by freezing the frame and tossing text on the screen to explain what happens to David and Elijah after their revealing chat. Why not shoot an extra three scenes to show what the text tells us? Why not end the film in true comicbook fashion with a visit to the police, an arrest, and a look inside a mental institution? As it stands, the last shot yanks the viewer completely out of the experience - Shyamalan doesn't provide any falling action... he just drops the climax before abruptly rolling the credits. It's a letdown to say the least.

I'm ready to admit that I finally see what people enjoy about 'Unbreakable.' It turns the superhero genre on its ear and explores a hero's psychological emergence rather than his physical development. Still, a few minor cuts and a trio of scenes at the end of the film would have made this one a classic. I would advise anyone to approach 'Unbreakable' with caution - it has a lot to offer the genre, but the end result doesn't live up to the director's ambitious concept and lofty intentions. 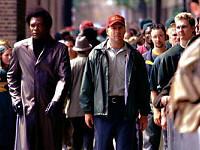 Dark, dreary, and as bleak as the film itself, the Blu-ray edition of 'Unbreakable' features a notable 1080p/AVC-encoded transfer that offers fans a proper upgrade from the underwhelming Vista Series DVD. Colors are stronger and more stable, blacks are inkier, and I didn't catch a hint of contrast wavering. Of course, detail receives the most remarkable boost: skin texture, hair, and clothing fabric look fantastic in this high-def presentation and relegate the standard DVD to the proverbial bargain bin. Watch any scene where David "scans" the stadium's hallways and marvel at the fine object detail littering each shot. Close-ups are especially impressive, revealing every pore and errant patch of stubble on the actors' faces. Source noise has also been drastically improved. While it hasn't disappeared altogether (there are still a handful of dark scenes with faint noise), the new transfer leaves the DVD's compression issues behind and presents a much cleaner image. I didn't catch any problems with pesky artifacting, banding, or edge enhancement either.

Unfortunately, the film's nature makes it difficult for the transfer to truly shine next to its high-def brethren. Quite a few scenes seem noticeably flatter than the rest of the film, fleshtones occasionally look muddy, and the image doesn't have the three dimensional pop I've come to expect on Blu-ray. A quick comparison reveals the standard DVD fumbles in the exact same scenes -- as such, most of these issues can probably be attributed to the source rather than the technical proficiency of the transfer. All in all, fans should be quite pleased when they finally get a hold of this faithful presentation from Disney. 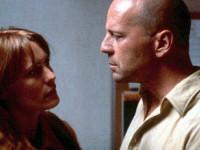 The video may occasionally struggle with its source, but the audio abandons the archaic DTS track on the DVD and presents a stunningly subtle PCM 5.1 surround track (48 kHz/24-Bit) for the high-def masses. Dialogue sounds wonderful, the sound effects are crystal clear, and low-end booms literally shake the floor. Between the pulsing bass-heavy score and the ambient tones that underscore the film's revelations, powerful LFE support seems to be the order of the day. Add to that an aggressive rear soundscape, and the soundfield comes alive to create the believable world of an ordinary superhuman. Listen to the muffled rumble of the train at the beginning of the film, the distant unease in the hospital, and the murmur of the stadium crowd -- 'Unbreakable' manufactures a detailed soundfield that sneaks up on you. It's so subtle and effective, that moments of explosive sound sent chills up my back and really made me take notice.

My lone complaint is that I strained to hear a bit of key dialogue. Since I kept the volume in check (so as not to be bombarded with the impressive LFE-laden mix), I had a hard time hearing a half-dozen lines throughout the film. Even so, a minor prioritization issue hardly spoils the merits of an excellent PCM track. Have no fear fans -- 'Unbreakable' sounds amazing and eliminates any justification for hanging on to the standard DVD.

(Note a few readers have discovered an audible glitch in the right rear speaker between 8:30-8:32, as well as the center channel at 1:28:21. While the slight popping noise occurs due to an encoding error on the disc, it will likely be overlooked by most viewers. It doesn't affect my score, but I thought it was worth mentioning in the official review as well as the message boards.) 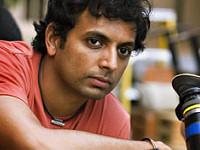 As usual, Disney has ported all of the special features from the 2-disc Vista Series standard DVD (2004) to this new Blu-ray edition of 'Unbreakable.' Sure, a pair of Alex Ross illustration inserts are MIA, but the $10 rebate provided for those who already own the DVD more than makes up for it. 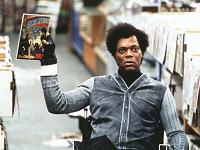 I connected with 'Unbreakable' far more on a second viewing than I did eight years ago, but it still left me mildly disappointed. While the performances are strong and the concept plays out to intriguing results, Shyamalan never seems capable of reigning in his ambitious whims. The Blu-ray edition features a above-average, faithful video transfer, an excellent PCM audio experience, and a full collection of supplements that mirrors the standard DVD. Fans will be more than thrilled with the end result, but newcomers should still approach with caution instead of making a blind purchase.

Sale Price 13.49
Buy Now
3rd Party 7.97
In Stock.
See what people are saying about this story or others
See Comments in Forum
Previous Next
Pre-Orders
Tomorrow's latest releases