When three murder victims are discovered in Moscow's Gorky Park - their faces and fingertips removed - detective Arkady Renko (William Hurt) is determined to identify the bodies and find the killer. But as a picture of the victims takes shape, the clues point toward involvement not only of the KGB but also of the woman he loves, Irina (Joanna Pacula). Now, hunted by the secret police and confronted by an intricate web of deception and treachery reaching to the highest political levels, Renko will stop at nothing to uncover the truth and bring the killer to justice - even if it means guaranteeing his own destruction...and losing Irina forever.

At the time of its theatrical release in 1983, 'Gorky Park' held the distinction of being one of the few films to tell a story from the point of view of those living on the other side of the Iron Curtain. With its narrative set in Moscow during the height of the Cold War, the film presented an opportunity for filmmaker Michael Apted to examine life in the Soviet Union, and, in a way, to humanize the people there for American audiences. What's curious about the film, then, is how it takes the concept of a murder mystery set in Communist Russia and westernizes it to such a degree that the only real trace of the film's unique setting is contained in the mink hats that have become a stereotypical part of the Russian iconography.

What's more, the film stars American actors like William Hurt, Lee Marvin, and Brian Dennehy, with only Hurt playing an actual Russian, who, as it happens, speaks with an inconsistent English accent. For whatever reason, every Russian character, with the exception of a few random babushkas and Irina Asanova (played by Polish actress Joanna Pacula) sounds as though they were brought up speaking the Queen's English. The apparent preference for spotted dick over borscht is not deal breaker by any means, but the wavering attempts at accents is just the first step in a series of miscalculations that leaves a tremendously fertile setting feeling as though it was largely uncultivated.

In a way, that sense of untapped potential has been baked into the story's stale bread. Even the most cursory glance at the narrative's rather rote murder mystery suggests that 'Gorky Park' could have easily been called 'Central Park,' or any number of other parks across the globe. Outside of the frigid temperatures and the idea of an American businessman involved in shady dealings with "the Red Enemy," there's very little about the film that feels like it is interested in actually depicting life in the Soviet Union, much less illustrating how the Cold War may have been observed from the point of view of a Russian. 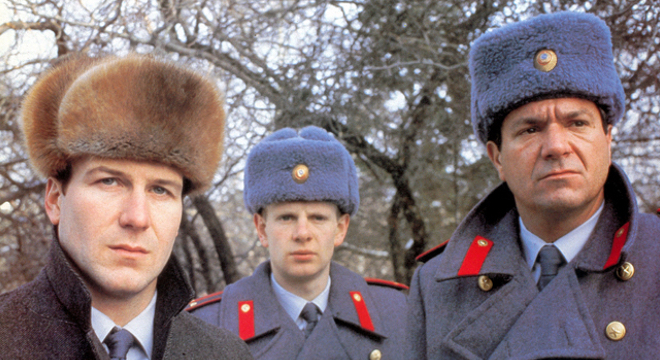 Instead, the film revolves around Arkady Renko (Hurt), a Russian detective investigating the deaths of three people whose bodies were discovered in the eponymous park with their faces cut off. With no immediate way to identify the victims and a sneaking suspicion that the KGB is somehow involved, Det. Renko slowly uncovers how the murders are linked to an intricate web of deception and political malfeasance that places him in an increasingly dangerous situation. But while Renko is dodging government officials eager to derail his investigation, he finds help from unlikely sources, like and American Detective named William Kirwill (Dennehy), who is searching for his brother's killer, and a scientist specializing in facial reconstruction played by Ian McDiarmid of 'Star Wars' fame.

These characters help pad the narrative as it works through the usual twists and turns of standard crime thrillers. Working the case, Renko encounters various obstacles, like an obstinate Irina, who is convinced the mysterious mink-selling Jack Osborne (Marvin) is her ticket out of Russia, despite the burgeoning romantic feelings she and Arkady have for one another. Additionally, there is Iamskoy (Ian Bannen), Renko's departmental supervisor who may or may not have ties to the KGB, and may or may not be preventing his detective from unraveling the case. This essentially reduces the film down to a series of plot-driven encounters and a few unconvincing red herrings. Few of them amount to meaningful character moments, much less anything that offers the audience something of substance about the setting. For all anyone can tell, Russia is exactly the same as Wisconsin in winter: a frightfully cold place that young, attractive women are eager to escape from.

And that's where 'Gorky Park' really stumbles. For all of its thinly drawn characters and potboiler narrative, the story skimps far too much when it comes to delivering a compelling storyline that actually has something to say about Mother Russia and what it's like living behind the Iron Curtain. Much of the film is so bland it would have been preferable if it had gone off the deep end and depicted the Soviet Union as some kind of hellscape draped in permafrost, a place where babushkas waited in never-ending breadlines and the men toiled in factories and mines, while the military and government officials swigged vodka and noshed on black caviar. Instead, the story of murder in motherland is so superficial it's as featureless as January in Sheboygan.

One could make the argument that this bland, benign depiction of the Soviet Union was deliberate, that it was designed to make Russia seem less scary and to depict a relatively normal world that just so happened to be the other half of the greatest arms race the world had ever seen. Instead, the depiction wound up doing Russia and the story at hand a great disservice. By concealing any angle of interest to a Soviet outsider, 'Gorky Park' effectively forces the audience to rely entirely on the mystery at hand. As it turns out, that mystery and its conclusion are only made interesting by questions of how they work in the confines of communist Russia. Since the film seems uninterested in seeking out and illustrating those differences, there's not much for the audience to latch on to. 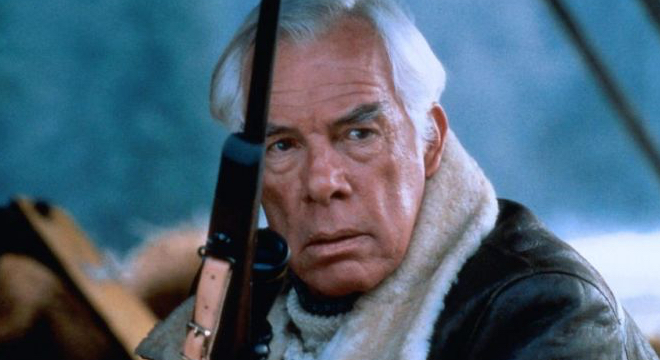 'Gorky Park' comes from Kino Lorber as a 25 GB Blu-ray disc in the standard keepcase. There are no previews here, so the film jumps straight to the top menu, where you will have the choice of special features or watching the film.

The 1080 AVC/MPEG-4 encoded transfer looks very nice. The image carries the hallmarks of a film shot in the early '80s, with a unique level of color and the presence of some grain, but overall, the picture is very good, and will likely be considered a vast improvement over previous releases. Fine detail is surprisingly strong throughout, giving a high level of detail in facial features as well as clothing textures and other elements. Backgrounds look very nice throughout, as the image's depth is quite strong, which is surprising considering so many shots depict a white, frozen landscape that stretches off as far as the eye can see.

Still, despite all that whiteness, the image delivers a nice array of color that, although slightly muted, still manages to pop against the stark background. Contrast plays a role as well, as white levels stay consistent, never letting the snowy setting blow out the rest of the image, or reduce any of the fine detail or sharp edges. On the other side, black levels tend to be a little soft, which produces more of a deep gray than a strong, inky black. Certain shadows tend to look murky, but are at least free from crush and banding of any kind.

This is a good-looking image that, despite its faults, is a nice upgrade from what's come before.

The DTS-HD Master Audio 2.0 mix offers fairly standard audio that makes up for its lack of completely immersive sound by making sure the various elements are well balanced, and that the dialogue is given priority when needed. In that sense, the audio works to play up the dynamic between the characters, which, ultimately, is basically what makes the film work. Dialogue is clear throughout, and even when there is heavy music or sound effects, those elements drop imperceptibly to allow the mix to prioritize.

The rest of the film is less impressive. Gunshots and other loud noises are anemic at best, making action sequences sound somewhat paltry. Punches, kicks, and even William Hurt diving through a window all sound rather weak. In addition the sound doesn't provide much in the way of atmosphere or ambient sound, making the film much quieter than it should be. There are a few moments where the setting helps create a true sense of space – such as the sequence at the spa – but other than that, the mix is flatter than it should be.

It gets the job done for the most part, but the mix here fails to compare to the quality of the image.

On-Camera Interview with Director Michael Apted (HD, 16 min.) – Apted give a fairly comprehensive interview about the making of 'Gorky Park,' what his intentions with the film were, and how he thinks it turned out. For the most part, it's an interesting look into how a director-for-hire looks at his past work, and how the making of even a potboiler such as this never feels quite finished for those involved.

'Gorky Park' may be too normal for its own good, especially considering the era and location in which its story takes place, but it works as a standard cop thriller nonetheless. Hurt delivers a good, if too straightforward performance, while the supporting characters tend to work solely as a series of plot-devices, rather than individuals who deepen the intent of the film. Still, with an impressive image that overcomes the good-but-not-great sound, this disc may appeal to those looking to revisit the movie, or those curious enough to check it out for the first time. Either way, it's worth a look.

Sale Price 41.25
Buy Now
3rd Party 74.95
In Stock.
See what people are saying about this story or others
See Comments in Forum
Previous Next
Pre-Orders
Tomorrow's latest releases