This year, a season-opening battle between raging Hep-Vamps and their Bon Temps prey sets the stage for a season-long series of hair-raising denouements for Sookie, Bill, Eric (Alexander Skarsgård), Jason (Ryan Kwanten), Sam (Sam Trammell), Alcide (Joe Manganiello), Tara (Rutina Wesley) and their human/vampire allies and adversaries. As we'll see, some of True Blood's most beloved figures will meet cruel fates, while others will cheat death (true and otherwise) to forge happily-ever-after relationships that will leave fans surprised and, ultimately, satisfied. What will happen to your favorite True Blood character?

For the seventh and final season of the fantasy vampire soap opera 'True Blood,' producers throw viewers right into the mix of battle, picking up minutes after the sixth season finale. The Hep V virus has spread into an epidemic in less than a year, making reformed author Bill Compton (Stephen Moyer) and recently-elected mayor Sam Merlotte (Sam Trammell) to take extreme measures, like pairing healthy vampires with humans for protection. During a late-night BBQ meet-and-greet at the newly-renamed Bellefleur's, now owned by the high-strung widow Arlene (Carrie Preston), a horde of the infected bloodsuckers declare war on the small parish town of Bon Temps, turning the little shindig into a bloodbath. If that seems worthy of spoiler alerts, then prepare for the sudden, unexpected, unseen deaths of Tara (Rutina Wesley) and Alcide (Joe Manganiello) as a way of saying goodbye to the popular vamp series.

To be perfectly frank, spoilers or no, this is arguably one of the season’s better aspects — established, seasoned characters can abruptly and without warning die — because otherwise this final run is utterly disappointing garbage. Previous seasons featured some essential villain who would unite all supernatural freaks and the residents of the southern backwater town together while bewildered viewers puzzle over why Sookie Stackhouse (Anna Paquin playing ever more annoying) remains the uncanny center of attention. But here, creators practically defang the show with the lack of a primary baddie, though the hunt for religious zealot Sarah Newlin (Anna Camp) pretends to serve that purpose meanwhile the infected vamps and the disease provide a narrative drive for several episodes. Eric (Alexander Skarsgård) and Pam (Kristin Bauer van Straten) are a vengeance trip for Sarah, and Bill’s relationship with Jessica (Deborah Ann Woll) is weighed down he discovers he's infected. 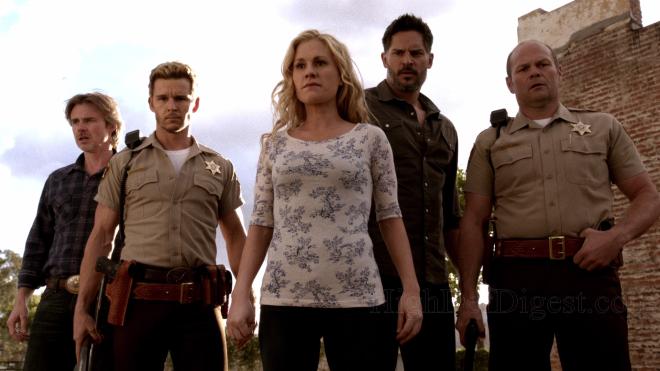 I suppose this would perhaps be another noteworthy angle to the season. A case can be made for Hep V being this season's proverbial evildoer, which makes for an interesting concept because it cuts immortality short, turning the once fearless creatures of the night into the panic-stricken undead. The dread and anxiety also turns an otherwise peaceful township into a scarily apprehensive and angry mob with guns, another minor note that sadly isn't very effective. The potential is clearly there for a satisfying stake through the heart of the series, but with each chapter, the show grows more tedious and uneventful, moving from one mind-numbingly humdrum tantrum to the next, jumping around between several character's melodramatics while oddly never engaging viewers. The storyline with Tara's ghost visiting the V-induced hallucinations of Lettie Mae and Lafayette (Nelsan Ellis) is a prime example of utter boredom.

As the seventh and final season of 'True Blood' labors with a deliberate objective of wrapping up the show — albeit with the threat of death shadowing most of the main characters — each episode becomes a chore to watch. It sometimes feels as if the writers and producers were also losing interest with every entry, creating sensationalism just to fill the hour. As if out of apathetic desperation for a last goodbye, past characters are brought back from the dead, such as good ole boy Hoyt Fortenberry (Jim Parrack), Terry Bellefleur (Todd Lowe), Steve Newlin (Michael McMillian) and Rutger Hauer as Sookie's fairy grandfather for a useless scene where he simply points out the obvious. Although it's easy to cheer Eric and Pam's pursuit of Sarah — surely, the show's only worthwhile storyline — the series ends on a whimper rather than the loud, excitable climactic groan loyal, devoted fans so rightfully deserve. Granted, the last few seasons have been going downhill, but this supposed grand finale of the vampire soap opera severely lacks bite.

HBO Home Entertainment brings 'True Blood: The Complete Seventh Season' to Blu-ray as a four-disc cardboard fold-out with individual plastic hubs for each Region Free, BD50 disc. The package includes a code for Digital Copies of all 10 episodes. The folder fits snugly into a sturdy and attractive red cardboard box. At startup, each disc goes to a menu screen with full-motion clips, music and the usual options.

The seventh and final season of 'True Blood' sinks its fangs into Blu-ray with an excellent and highly-detailed 1080p/AVC MPEG-4 encode that razzle-dazzles with crisp, brilliant contrast levels. Each episode shines as individual objects in the background are made plainly visible, exposing every nook and cranny inside the various houses and buildings. Presented in its original 1.78:1 aspect ratio, fine lines in the clothing and foliage are also razor sharp and distinct with lifelike textures in faces. Deep, rich blacks provide dark shadows to penetrate the screen without ruining gradational details while adding appreciable depth. The same metallic-chrome palette from the previous season is used here, but colors remain vibrant and accurate throughout, making this a world-class transfer.

Not trailing far behind is an equally fantastic and often wonderfully immersive DTS-HD Master Audio soundtrack that takes advantage of the entire soundscape in pretty much every episode. By and large, the intended design is a front-heavy presentation focused on the drama of the characters, delivering crisp, precise vocals in the center at all times. Imaging is rich with endless activity and well-balanced channel separation, creating a very welcoming and expansive soundstage exhibiting a distinct mid-range and pleasing acoustical details. The low-end offers appreciable weight and depth to the music and action sequences that require it. On the plus side, the rears are often employed with discrete directionality, convincing panning and lots of ambient effects, making this a really great lossless mix for a poorly-conceived final season.

For the seventh and final season of the fantasy vampire soap opera 'True Blood,' producers throw viewers right into the mix of battle, picking up minutes after the sixth season finale. Sadly, the series ends on a whimper rather than the loud, excitable climactic groan loyal, devoted fans so rightfully deserve. The Blu-ray arrives with an excellent audio and video presentation, but the supplements are on the slightly disappointing side. Nonetheless, those who have stuck it out over the years will be quite tempted to pick up the package just to complete the set.

Sale Price 38.96
List Price 68.95
Buy Now
3rd Party 69.99
In Stock.
See what people are saying about this story or others
See Comments in Forum
Previous Next
Pre-Orders
Tomorrow's latest releases