Mothra, one of Godzilla's longtime allies (and sometimes foe) gets her very own movie series in this, the first of a trilogy. When the three-headed Desghidorah, even fiercer than King Ghidorah, begins to destroy the forests of Japan, Mothra leaves her island paradise to help save them. Rebirth of Mothra has a running time of approximately 107 minutes and is not rated.

Two young kids inadvertently unleash a giant sea creature which is somehow strengthened from the abundance of modern-day pollution. Mothra's keepers, the tiny twins Moll and Lora, quickly rouse the gentle giant in order to combat this latest threat to peace. Rebirth of Mothra II has a running time of approximately100 minutes and is not rated.

In the final film in the new Mothra trilogy, King Ghidorah, the most destructive of all the monsters, returns to destroy the Earth. Primed for combat, Mothra goes into the past to battle a younger version of King Ghidorah. Rebirth of Mothra III has a running time of approximately 100 minutes and is not rated.

Not exactly a regeneration or bringing back from the dead as the title would imply, 'Rebirth of Mothra' is more a renewal or renaissance of the kaiju films of the past produced by the Toho Company. Especially after the massive success of 'Godzilla vs. King Ghidorah' and 'Godzilla vs. Mothra,' there definitely was a renewed interest in the genre in the mid-90s. For this movie, which sadly would mark the final involvement of Tomoyuki Tanaka before passing away a few months after its release, the overgrown but very friendly moth is tasked with battling the planet-destroying Desghidorah alone. Awakened from its slumber, after laying an egg in hopes of repopulating Earth with its protector species, the heroic giant bug uses all manner of special powers, shooting rays from its antennae, electric shock from its wings and sparkly pixie dust. However, the poor creature proves too weak and old a match against the three-headed, lava-breathing beast.

Fighting in both larva and adult hairy flying insect forms, Mothra's baby, Leo, finally joins its mother in the fight to save the planet. With the added help of two tiny, humanlike nymphs (Sayaka Yamaguchi and Megumi Kobayashi) and a pair of contentious siblings (Kazuki Futami and Maya Fujisawa), the effort is essentially the preservation of thousands-of-years-old trees from a hungry monster that feeds from the life-energy of Mother Nature. Brimming with spectacular practical effects, explosive live action and lots of hilariously-bad optical effects, the movie manages to excite and entertain with a hurried pace, plenty of amusing visuals, and a melodramatic core about family and the environment. It's green, anti-industrial message is both subtle and blatant, but thankfully never feels heavy-handed or forced in this kid-friendly creature feature. (Movie Rating: 3.5/5)

Even for a kaiju film, this Toho production about a gargantuan but colorful and benevolent moth that protects Earth from ill-natured and destructive monsters that seek to destroy it is, at times, far-fetched and tests audience patience. The follow-up to the reboot of the Mothra series picks up some time after the events of the previous movie and almost immediately jumps into absurd silliness. In the middle of school, two boys (Masaki Otake and Shimada Maganao) try to prank another little girl (Hikari Mitsushima) with a caterpillar, but a chain of events ends with the bug flying through the air and snuggly landing down the teacher's blouse. Later, a Furby with creepy old-man eyes named Ghogo makes an appearance and forces the kids to set rivalries aside for a cause greater than their own. The ocean is infested with poisonous pulsating starfish creatures, signaling the arrival of the rocket-launching monster Dagahra. 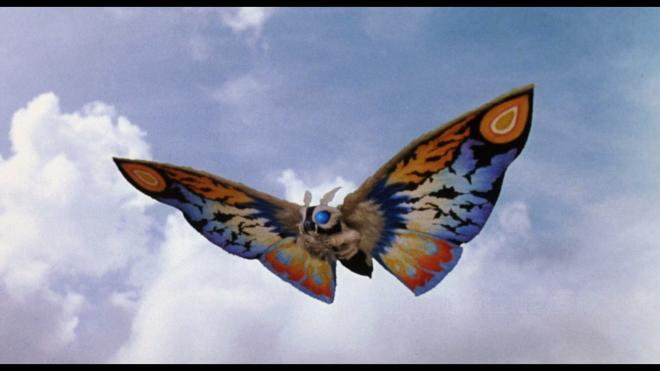 Where the script, based on another story by genre mainstay Tomoyuki Tanaka, jumps into silly nonsense is the Atlantis-like legend of an extinct civilization that originally created the monster. Granted, the film is clearly geared towards younger viewers, going so far as introducing two completely unnecessary clumsy buffoons (Atsushi Okuno and Hajime Okayama) for laughs and a cheap trick for moving the plot, but a large portion in the middle plods along with little sense of urgency or excitement. When the ancient city's pyramid is resurrected from the ocean, characters waste time running around for a treasure that doesn't exist. Meanwhile, Mothra Leo is badly worked over by a stronger and more vicious foe. That is until more pixie dust transforms her into an underwater beastie that looks like a cross between a hawk, a wasp and a flying fish. Belvera (Aki Hano) and her Elias sisters, Lora and Moll, also return, but ultimately don't contribute anything to the narrative except as eye-candy. (Movie Rating: 2/5)

Mothra Leo returns for this third and final installment in the 'Rebirth' trilogy, offering a better and more entertaining sequel than its predecessor. Granted, the film remains a similar kid-oriented Spielbergian adventure with John Williams-like music forcing a fanciful sense of wonderment, but the filmmakers deliver the excitement by dividing the men-in-rubber suits and mechanical creatures spectacle evenly with a heartfelt plot about family and the love between siblings. The Elias sisters also return with Belvera once again up to her old tricks of finding new ways to rid Earth of its most destructive foe: the human race. The younger Lora and Moll bicker and argue with her while Mothra is revived and tasked with battling the deadliest and most powerful monster of them all, King Ghidorah. A complementary storyline sees the oldest of three children building the courage to save the younger two from the monster's hunger.

More serious than the second but not as unintentionally corny as the first, part three satisfies largely due to the special effects, a spectacular display of optical effects, CGI, miniatures and the fight sequences obviously performed inside a sound stage. To tell the truth, the computer images are pitifully cheap-looking, and the digital composites are hilariously shoddy, yet it becomes the film's charm and central source of entertainment. Ghidorah flies into the city tumbling buildings and whisking cars in the air by flapping its wings, scenes of large-scale destruction and mayhem reminiscent of nearly every 90s disaster blockbuster imaginable. The script jumps into silly mode when introducing its time-traveling concept, which in the end makes absolute nonsense and unwittingly opens doors to a couple laughable paradoxes. Sprinkled with the magical power of rainbow pixie dust, the trilogy finishes strong in this second sequel. (Movie Rating: 3.5/5)

Sony Pictures Home Entertainment brings the 'Rebirth of Mothra' trilogy to Blu-ray as a two-disc package part of the distributor's "The Toho Godzilla Collection." Both discs, one a BD25 while the other a BD50 containing both sequels, are Region A locked and sit comfortably on opposing panels inside a blue, eco-elite case, accompanied by a flyer for UltraViolet Digital Copies. At startup, viewers are taken directly to a static menu screen.

All three Mothra films are reborn on Blu-ray with strong and generally pleasing 1080p/AVC MPEG-4 encodes. However, the video doesn't really offer the sort of quality we've come to expect from the format, but much of this due to the original photography with its simple, cheap-looking visual effects and the condition of the source used. Basically, the movies seem poorly-resolved and on the soft side though fine object and textural details are pretty good, all things considered. Healthy facial complexions are revealing, and the 1.85:1 image is awash with a layer of visible but consistent grain, giving the presentation a nice film-like appearance. Black levels are deep and true with good shadow details while average contrast borders on the weak but passable. Primaries are bold and often vivid, but secondary hues are rather lackluster, creating a mostly flat picture.

Like the video, all three films have both their good and bad qualities in the audio department, but overall, they offer a pleasing and enjoyable presentation. Fans have a choice between the original Japanese language and a surprisingly good English dub, as both come with well-prioritized vocals. In either case, though personal preferences favor the former over the latter, listeners can enjoy a wide and welcoming DTS-HD MA stereo soundtrack that offers well-balanced channel separation. Broad imaging delivers a fairly strong sense of presence with a variety of discrete off-screen effect for ambience. Dynamic range and acoustics sadly fall flat and although there's clean distinction between the frequencies, the soundstage mostly feels uniform and a bit hollow. Low-bass is pretty tame and bland but nonetheless adequate with some mild, appreciative weight.

Although not exactly the most memorable flicks in the Godzilla universe, the 'Rebirth of Mothra' trilogy still offers some pleasing entertainment value for loyal fans of the kaiju genre. All three films arrive on Blu-ray with passable and generally strong audio and video presentations, but a lack of supplements makes the overall package tempting only to devoted fans.

Sale Price 14.99
List Price 19.99
Buy Now
3rd Party 9.99
In Stock.
See what people are saying about this story or others
See Comments in Forum
Previous Next
Pre-Orders
Tomorrow's latest releases