Fifty years ago, the Japanese Defense Forces killed Godzilla or so they thought. When a series of terrifying natural disasters begin to plague Japan, including the inexplicable offshore sinking of a U.S. submarine, a mystic old man warns his nation that Godzilla has come back to destroy Japan as revenge for all the souls lost in the Pacific War. When mere military might cannot squash the monster, the mystic man awakens the Holy Beasts of Yamato - King Ghidorah, Mothra and Baragon, sleeping giants that protected Japan in ancient times. These untamed mammoth beasts take on Godzilla with frightening supernatural brute power that has been 2,000 years in the making. Tradition and technology collide in this chilling high-tech, cutting-edge fable. Godzilla, Mothra and King Ghidorah: Giant Monsters All-Out Attack has a running time of approximately 105 minutes and is not rated.

After four years of scrupulous preparation under the prime minister, a new invincible robot, Mechagodzilla, has now reached completion, armed with various weapons, including the most powerful gun in history that can destroy anything in the world. Akane Yashiro is transferred to join the Mechagodzilla team as an operator who controls the mechanical monster. As soon as Mechagodzilla starts on its test run, the huge shadow of Godzilla begins to rise from the depths of the ocean...The battle of the century is going to take place between Godzilla and Mechagodzilla. Godzilla Against Mechagodzilla has a running time of approximately 88 minutes and is not rated.

Self-aware and quite deliberate for unexpected bits of humor, the third installment in the rebooted Godzilla franchise, fittingly coined the Millennium series, is a fun, enthusiastic wild ride with some tenderness and spunk at its core. Inside jokes and cleverly indirect jabs are made early on, balanced with a sense of dramatic urgency that nicely moves the narrative with excited pace, setting a tone that aims at deadly serious disaster flick but is very willing to delight in the absurdity. Almost as if still harboring a slight disdain for Roland Emmerich's Americanized attempt, the filmmakers take a quick moment to have two young sailors tell audiences that the giant radioactive lizard that attacked New York was not Godzilla. In fact, as one of them points out, the verdict is still out on what exactly it was, but it mostly certainly was not the same rough-skinned, serrated-finned reptilian creature which 21st-Century Japan is about to encounter.

Hence, director Shûsuke Kaneko ('Gamera: Guardian of the Universe,' 'Death Note') creates a feel that he and his crew are about to show Emmerich and Hollywood, in general, a thing or two about making a proper kaiju film, especially when it pertains to the King of the Monsters. Working from a script which Kaneko co-wrote with Masahiro Yokotani and Kei'ichi Hasegawa, the story picks up nearly fifty years after the events of Ishirô Honda's 1954 classic with a deliberately slow build up when the Japan Self-Defense Forces searches for a missing nuclear submarine and audiences are given glimpses of the iconic monster's serrated fins. As confusion and panic are amplified by unexplained earthquakes, massive landslides and enormous water cocoons, all which funnily bring harm to mischievous, shrine-disrespecting hoodlums, the plot carefully intensifies viewers' anticipation for when Godzilla will wreak endless havoc.

As the film gradually escalates in scale and scope, almost as if intentionally striving to be the biggest and baddest of the genre, Kaneko whets our appetite and piques our interests for the upcoming showdown with brief peeks at the other kaijus. Loyal fans will quickly catch on to some alterations made in the classic monsters. Baragon's horn doesn't glow, and Mothra is smaller and without her magical energy attacks. However, the most obvious change comes by way of King Ghidorah's size and for taking the role of protagonist — one of the legendary guardians, to be more precise. Actually, the plot itself involves a bit more mysticism and spirituality than seen in any of the Godzilla movies. Our guide through the folklore angle is the intrepid TV reporter Yuri (Chiharu Niiyama), working for a low-budget TV station and watching the mayhem from the sidelines, sometimes in the line of fire. Her dramatic arc adds the necessary heart to one of the better entries in the modern Godzilla franchise. (Movie Rating: 4/5) 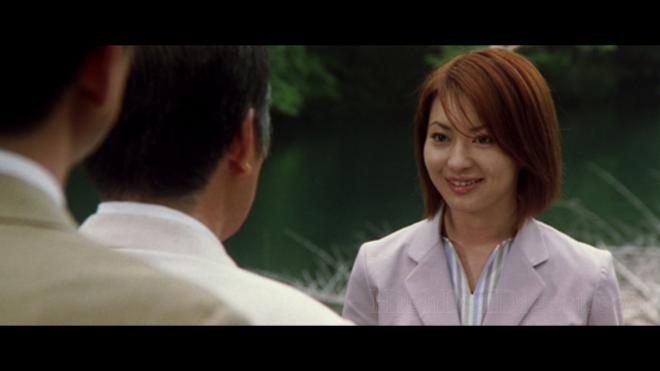 In the fourth installment in the Millennium series, director Masaaki Tezuka ('Godzilla vs. Megaguirus,' 'Godzilla: Tokyo S.O.S.') immediately throws audiences into the middle of mass hysteria as the legendary Godzilla tramples unto Japanese shores. With brilliant cinematography by Masahiro Kishimoto and excellent stage production by Toshio Miike and Yukiharu Seshita, Tezuka positions his camera in such a way as to revere and immortalize the King of Monsters, perfect for posters and promotional material, while also magnifying its size, perfectly situating its brute force and power for destruction. The Japan Self-Defense Forces surround the reptilian giant and fire their latest weapon, a mazer-cannon, which sadly proves infective, leaving the island vulnerable to future attacks while the military uses Lt. Akane Yashiro (Yumiko Shaku) as the scapegoat. The opening, taking place in 1999, is a visually exciting, action-packed start to another strong entry in the reboot franchise.

Four years later, the government finally decides to do something about the country's monster epidemic, or as one character describes it as "Godzilla's curse." From a script by Wataru Mimura ('Godzilla 2000'), one of the great aspects of this storyline is that it follows in the continuity of Ishirô Honda's 1954 classic, along with a few other Toho favorites, like Mothra and Gaira. During a private conversation between government officials, Tezuka interlays clips from those films so as to quickly rundown the threats they've had to face in the past. Showing that the mazer-cannon had worked before in those scenes, the plot cleverly suggests that their newest menace born of the nuclear age is a different Godzilla creature since the original was actually killed by Dr. Serizawa's secret Oxygen Destroyer. This makes for a great twist because this monster is stronger and more powerful than its predecessor, leaving open a future explanation about its origins and the opportunity to expand on the franchise.

The aforementioned officials plan to construct a monster of their own to defend against future attacks, not only from the gigantic roars of this overgrown lizard but from other unimaginable horrors yet to be revealed. But here is where the story really gets kooky: the idea is to take the DNA from the original Godzilla's skeleton into a giant robotic version. The government assembles their top-notch scientists, including expert biologist, single-father and overall comic relief Tokumitsu Yuhara (Shin Takuma), and invent the bio-mechanical cyborg called Kiryu, but known to us as Mechagodzilla. Armed with the world's most powerful weapon, a freeze ray dubbed Absolute Zero, the massive robot is conveniently piloted remotely by Yashiro, given the character the obligatory redemption arc. Despite the narrative being fairly predictable however, 'Godzilla Against Mechagodzilla' manages to surprise with awesome practical-effects action and an unexpected open-ended finale for future entries. (Movie Rating: 3.5/5)

Sony Pictures Home Entertainment brings this Godzilla double-feature to Blu-ray as a two-disc package part of the distributor's "The Toho Godzilla Collection." Both are Region A locked, BD50 discs, each containing their respective film, and sit comfortably on opposing panels inside a blue, eco-elite case, accompanied by a flyer for UltraViolet Digital Copies. At startup, viewers are taken directly to a static menu screen.

The big showdown of giant monsters premieres on Blu-ray with a pair of strong 1080p/AVC MPEG-4 encodes, though 'Godzilla Against Mechagodzilla' is decidedly the better of the two. Definition and clarity is more detailed with lots of clean, distinct lines in the monster suits, buildings and facial complexions. While both movies come with their share of poorly-resolved sequences, likely due to the original photography and condition of the source, the first movie is blurrier and softer, but the second movie reveals negligible hints of noise and aliasing around the edges of many objects.

Presented in their original 2.35:1 aspect ratios, contrast is a tad on the hot side in the fight against Mechagodzilla while the all-out monster bash is duller and flatter. Colors in both movies are on the average side, but primaries are accurate and often bold. Blacks, on the other hand, are deep and true, though Mechagodzilla once again takes the edge with better, richer shadows that give the presentation a welcomed cinematic feel.

On the audio front, both films explode into action with a pair of DTS-HD Master Audio soundtracks that fill the room with excitement. The rears come with lots of discrete activity and good directionality, creating a satisfying and often immersive soundfield. Debris from the buildings scatters all around, the screams of citizens running from the mayhem are enveloping and the heat rays from both monsters flawlessly pan from one side of the room to the other. Dynamic range isn't particularly extensive, but the mids and highs are well-separated and detailed, generating a broad and action-packed front soundstage. Low bass packs a strong, palpable punch to each foot stomp, scene of destruction and Godzilla's unique roar. All the while, vocals remain clear and precise in the center, making both lossless mixes a great and fun listen.

As part of the distributor's "The Toho Godzilla Collection," Sony Pictures brings a pair of Godzilla features from the Millennium reboot franchise. The first is all-out monster mash, where the iconic monster battles Mothra and King Ghidorah while the second sees the reptilian giant go one-on-one against its robotic double. The Blu-ray for each comes with passable but mostly average picture quality but the audio presentations are significant improvements. The lack of bonus material hurts, but the overall package will surely make kaiju fans happy to include it in their collection.

Sale Price 11.99
List Price 19.99
Buy Now
3rd Party 11.99
In Stock.
See what people are saying about this story or others
See Comments in Forum
Previous Next
Pre-Orders
Tomorrow's latest releases