A special high mountain command of nine experienced soldiers is sent to a military base in a desolate high-plains moor of Colombia with which contact was lost several days ago and was believed to be target of a guerrilla attack. Upon arrival, the only person found inside the base is a peasant woman who is heavily chained. Gradually, the isolation, the inability to communicate with the outside world, and the impossibility to escape, undermine the integrity and sanity of the soldiers, causing them to lose the certainties about the identity of the enemy and creating doubts about the true nature of that strange woman.

If it is possible to make a horror film tense and frightening by sustaining a particular atmospheric tone, the 2011 Colombian film 'The Squad' certainly wants to test that theory out.

Director and co-writer Jaime Osorio Márquez, takes the notion of "atmosphere" to another level by using the literal and figurative sense of the word to the fullest extent, putting his characters in a tense, combative situation where the ambiguity of what is going on (is it supernatural, manmade, or simply good old fashioned paranoia?) generates a palpable level of suspense and terror.

High up in the mountains of Colombia, a team (or squad, if you will) is sent by the military to investigate why all communications from a remote military base have ceased. Márquez wastes no time in allowing the dense fog and steep, awkward angles of the setting to become the main character of the film. The real-life base's fear-provoking quality is so great that, as the members of the squad congregate at the foot of a massive staircase, awaiting orders to proceed, the question of who or what is waiting above, just out of sight, quickly begins to take over. 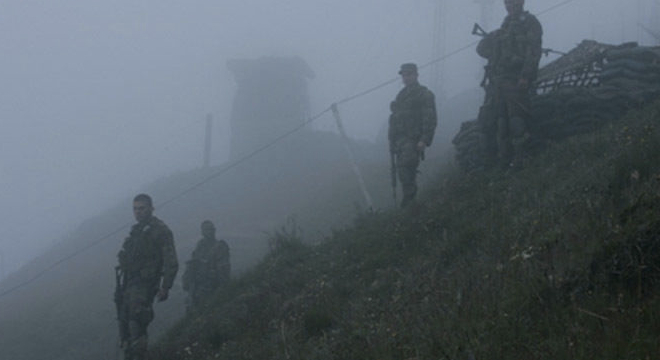 Like the beginning of a nightmare, 'The Squad' opens without any exposition at all. After a brief flashback filled with dialogue that has no contextual relevance as of yet, the question of what the military is doing there and why is slowly dolled out as the narrative progresses. For the first few tense minutes, it's enough that the military has arrived; the pensive look on everyone's face tells the rest of the story: something bad has happened and they're about to walk straight into it.

That sense of disorientation is the key to the story, and Márquez makes sure to keep his characters, as well as the audience, from ever feeling like they have gotten their footing. By switching rapidly between the members of the team as they spread out to investigate the base, there's no chance for the audience to orientate themselves within the setting. It's all just a jumbled blur of vaguely familiar locations and the echoes of men yelling at one another over what seems like vast distances.

The clouds shrouding the base in portent of doom intensify the escalating terror and the suggestion that something supernatural is going on, especially after the crew stumbles upon the bloody evidence of a massacre that is missing one key element: There're no bodies to be found.   Terror begins to set in after one of the men discovers an incoherent, screaming woman imprisoned behind a concrete wall. Of course, the wall was also covered in archaic symbols and writing hinting at the evil inside and warning others to stay away.

It is such an effective use of horror tropes that the film doesn't need to provide clear-cut answers to anything that happened before the titular squad arrived – much less explain their current circumstance – because the terror hinges on the questions of what has been presented. Ambiguity is typically not at the top of most audiences' must-have list when it comes to what they want in a movie, but 'The Squad' seems determined to use its elements of doubt and uncertainty to build a better horror film. By the time deep paranoia sets in and the team begins turning on one another and chasing ghosts (?) across the secluded mountaintop, it doesn't really matter whether the evil is real or it was simply in the men all along; the effect is chilling and disturbing.

Although the film relies on the power of the ensemble, it begins to focus on the plight of the Ponce (Juan Pablo Barragán), a solider who vacillates between moments of empathy and cowardice, being frightened into submission by the stronger, larger men of his group. Following the discovery of the woman in the wall Ponce comes to offer her food, seemingly as a way to atone for having done nothing to prevent Sargento (Andrés Casteñeda) from beating her, in order to get her to talk. While the rest of the group unravels, Ponce's cowed reaction to the others in his squad delivers a subtle subtext of masculinity and an investigation of man's violent and self-destructive nature.

The narrative explores this thread most overtly, as the already shaky foundation of the team crumbles under the immense weight of isolation, fear, and superstitious paranoia. The end result, then, is the rare horror film that doesn't allow itself to indulge in the typical excesses of its genre, but instead uses the implications of its subject to reflect on the terror inflicted by people onto those who should trust them. Mixed with the ambiguity of the story and an unsettling finale, the film again uses the setting to an extraordinary degree, making 'The Squad' the kind of well-crafted horror film you ponder long after the credits have rolled. 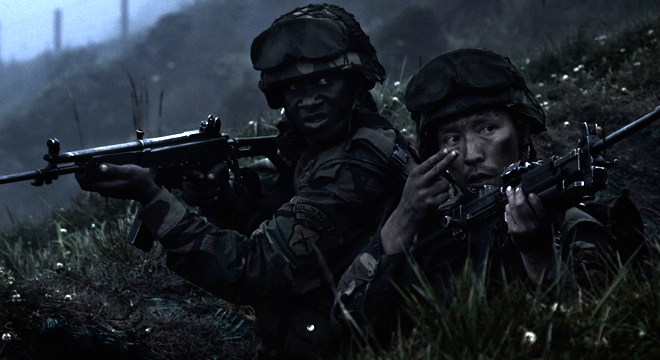 'The Squad' comes from Scream Factory as a single 50GB Blu-ray disc in the standard keepcase. The film jumps straight to the top menu, where you can choose from a limited range of options. Like most releases from Scream (or Shout) Factory, they go the extra mile with their packaging and include a double-sided insert that, although slight, just looks nice and adds another level of appreciation for physical media.

The film's 1080p AVC/MPEG-4 encoded transfer has its work cut out for it, as the story's remote military base is an actual structure high in the mountains of Colombia. The heavy clouds adding to the atmosphere are part of the harsh filming conditions the actors and crew had to endure, and that results in a stylish, but incredibly dark and sometimes hazy image. The effect, of course, is tremendous; it generates terrifying levels of anxiety that feel completely real because they are. This is a terrific example of real-world special effects being used in the best possible way. And although there are a few occasions where the fine detail is reduced on account of the haze, it serves the film so well, there's no way to complain about it.

Otherwise, the image delivers a healthy amount of fine detail throughout. Facial features, hair, miniscule background elements, and clothing textures are all on display. They even manage to show up in some of the darker portions of the film as well. When the camera can see more than 10 feet, the landscape is lush and green, despite the gray pallor of the sky and the concrete walls of the military base. In that sense, when color is called upon, it is vibrant and bright; it is used so sparingly, the effect is rather dramatic.

Contrast is good throughout as well. Black levels are strong and inky, while shadow delineation is strong. There is no trace of banding in the sky, which takes the image up a notch, since that plays such an important part in the film. White levels are less of a concern, but they are even throughout.

Overall, this is strong image that supports the atmosphere of the film and enhances the audience's viewing pleasure.

The DTS-HD Master Audio 5.1 (Spanish) mix is good in terms of catering to (what else?) the atmosphere, but it can sometimes leave something to be desired when it comes to how the dialogue is handled. For the most part, dialogue is clear and crisp, but there are a few moments where the balance is off, and the voices of the actors is lower than it should be, or muted in some way. While this may not have much of an effect on those of us reliant on the English subtitles, Spanish-speaking audiences may notice the difference.

Other than that, though the mix handles ambient noise, echoes, and gunfire with great aplomb. Most of the sound is presented through the front right and left speakers, with the atmospheric elements being handled through the rear channels. The effect is an immersive experience that, when combined with the chilling score is incredibly successful. By the time the men are shooting at nothing in zero visibility, the extension of the sound design is on full display, and subsequently taken up a notch by the meticulous imaging and directionality that helps sell the scene.

This is a nice mix that will seem better than it is to those who don't speak Spanish, but the other elements are still effective.

Behind the Squad (Making Of) (HD, 20 min.) – This extensive behind-the-scenes look at the film demonstrates the difficulties of shooting in such high altitudes and in such an unforgiving climate. If anything, the production should be commended for getting through shooting and then having to loop nearly every bit of dialogue, due to the howling winds that wreaked havoc on filming.

There aren't many films that can do what 'The Squad' does and still be called successful. The film uses its setting and atmosphere to such ridiculously good levels that it's hard to find anything to compare it to. Although ambiguity can sometimes be a crutch for certain filmmakers, here it's just another asset to a finely tuned, well-made horror film that deserves to be seen. Although there could have been a few more extras, the great picture and good sound make this one recommended.

Sale Price 24.33
Buy Now
3rd Party 34.95
In Stock.
See what people are saying about this story or others
See Comments in Forum
Previous Next
Pre-Orders
Tomorrow's latest releases