Overview - From the studio that brought you Remember The Titans comes an inspirational film based on a true story. Jim Morris (Dennis Quaid), father, teacher, and high school coach, though his dream was over. He'd had his shot playing baseball, blew out his shoulder, and retired without ever making it to the big leagues. Then, in 1999, Coach Morris made a fateful bet with his perpetually losing team. If they won the district championship, Morris - who threw a 98 mph fastball - would try out for the majors. The team went from worst to first, and Jim, living up to his end of the bargain, threw caution to the wind and was on the road to becoming the oldest rookie in the major leagues. This heartfelt, uplifting story about not giving up on your dreams is a remarkable and affecting story that will have everyone cheering.
OVERALL
Worth a Look

I was standing in the middle of Wal-mart the other day, browsing bargain bin DVDs, when an employee walked by with an open bag of peanuts. Without warning, a memory stormed my brain. I was suddenly five-years-old, sitting in a rickety metal seat next to my dad at an Orioles game, bombarded with the light aroma of freshly cut grass, the smell of hot dogs from a nearby vendor, and the stale scent of discarded peanut shells on the stadium floor. Baseball will do that to you -- the sights and sounds of a game can stick with you for years. The same can be said of a good baseball flick, be it a critical fave like 'The Natural,' an appealing drama like 'Field of Dreams,' or an underappreciated family favorite like 'The Rookie.'

Based on a true story, 'The Rookie' tells the story of Jimmy Morris (Dennis Quaid), a minor league pitcher who retires from baseball after blowing out his shoulder. Working to find a new purpose in life, Jim tries his hand at teaching chemistry and coaching baseball at a small Texas high school. The team is struggling to say the least and Jim makes a deal with his frustrated players -- if they make the district playoffs, he'll attend tryouts for the Majors. When the team lives up to their end of the bargain, Jim finds himself reentering an arena he thought he'd left squarely in his past, but when he starts throwing 98mph fastballs, he quickly finds himself on the roster of the Tampa Bay Devil Rays.

Don't be scared away by the film's G-rating. 'The Rookie' is a poignant tale of shattered hope and perseverance that will feel all too familiar to anyone who ever had a lofty dream. Dennis Quaid brings real heart and soul to the character of Morris and nails the man's frustrations and triumphs. Morris' insecurities fill the aging lines of Quaid's face, with the actor exuding a rekindling confidence that amplifies the film's message tenfold. When Morris realizes that his injury has transformed him into a better pitcher than he was before, Quaid's visible confusion and relief strike a particularly realistic chord. I swore I would never use the term "tear jerker" as a compliment for a film, but 'The Rookie' tugs on just the right heartstrings to warrant more than a few legitimate man-tears.

Director John Lee Hancock ('The Alamo') manages to balance the sentimentality of an inspirational family film with the complex emotions required of a serious drama. While his adherence to a G-rating keeps the film from exploring the darker edges of Morris's early fall from grace, it allows young children to share a weighty film with their parents, one that doesn't rely on a singing furball or a slapstick hero. Some viewers may gripe that the film is predictable, but that seems like a shallow complaint when dealing with a true story. Admittedly, the setup and tone are familiar, but 'The Rookie' takes its clichés in stride and delivers its developments with a strong script and a stable of compelling performances.

'The Rookie' may not be everyone's idea of an engaging drama, but I thought it had a lot going for it. Quaid anchors an impressive cast, Hancock tells an inspiring story, and the cast and crew deliver a family film that doesn't pull any punches. In an era of syrupy genre flicks aimed at your kiddies, 'The Rookie' stands head and shoulders above the rest to provide a genuinely gripping family drama that will excite and entertain kids and adults. 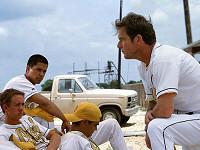 'The Rookie' features a striking 1080p/AVC-encoded transfer that puts yet another notch on Disney's belt of beautifully preserved catalog titles. After taking a quick glance at the standard DVD's drab PQ while preparing for this review, I have to admit I didn't expect Disney to invest a lot of effort in such an underappreciated family film. Apparently someone at the studio has a soft spot for 'The Rookie,' since it's been given the full high-def treatment. Spectacular colors populate the film with natural skintones, warm primaries, and lush environmental accents. Contrast is spot on and the picture has a welcome three-dimensional appearance that makes the DVD look like a well-worn VHS copy by comparison. I didn't detect any of the source noise, artifacting, or edge enhancement that occasionally hindered the standard definition release.

Fine object details also receive quite a bump, revealing tiny details and clothing textures in the foreground and background that imbue the picture with convincing depth. A few shots seem soft compared to the rest of the film, but I believe these moments should be chalked up to the original print, rather than a technical deficiency in the transfer. The only real problem I noticed was that black levels aren't as resolved as I'd like, hovering closer to dark grays in a handful of scenes. While delineation improves a bit in these brief moments, it flattens the image and slightly detracts from the overall experience. Regardless, 'The Rookie' looks stunning in high definition and will completely erase the standard DVD from your memory. 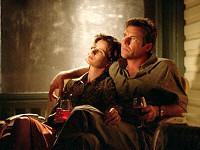 While I was taking notes on the uncompressed PCM 5.1 surround track (48 kHz/ 24-Bit/ 6.9 Mbps) included on the Blu-ray edition of 'The Rookie,' I couldn't help but compare it to the exceptional TrueHD track on another baseball drama I reviewed, 'For Love of the Game.' Even though both releases utilized high-end audio tracks for what are essentially conversation driven films, 'The Rookie' just doesn't have the expansive soundfield and thrilling dynamics that wowed me in 'For Love of the Game.' In fact, the rear speakers in 'The Rookie' are less involving, ambiance leaves too much to the imagination, and the LFE channel doesn't have a lot to play with.

Don't get me wrong, 'The Rookie' certainly doesn't sound bad. Dialogue is clean and well prioritized across the front channels and several scenes in the climactic third act pack in some impressive surround support. Elements of the soundscape that I once took for granted on the original Dolby Digital DVD track sound particularly strong here. Every time the crowd erupted in cheers and applause, I realized how muffled their roars actually sound on my standard copy of the film. Every time a character spoke, I celebrated the fact that there wasn't a hint of compression noise detracting from the clarity of their voice. As it stands, 'The Rookie' has been faithfully represented by a PCM track that does a great job replicating the film's limited soundfield. Unfortunately, this uncompressed mix just can't match the intricate design and attention to detail of other baseball sagas I've reviewed in the past. 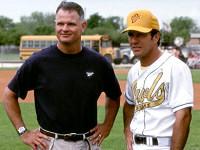 Disney has ported all of the special features from the standard DVD to the Blu-ray edition of 'The Rookie.' While the behind-the-scenes material is fairly dry and stuck in 480i/p limbo, the features create a more substantial supplemental package than one might expect from a live-action family film. 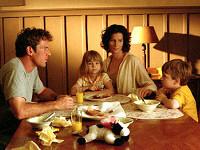 Don't be scared away by the G-rating attached to this overlooked gem -- 'The Rookie' doesn't pander to its youngest viewers and it constantly strives to reach audiences of all ages. While I do wish the film was able to dig further into the more complicated aspects of Jim Morris's life, it's a solid drama for the whole family. The Blu-ray edition is pretty impressive as well, featuring an excellent video transfer, a faithful PCM audio track, and a complete port of the standard DVD supplemental package. Sure, there are some hiccups in the overall presentation, but 'The Rookie' is definitely worth a look.

Sale Price 24.68
Buy Now
3rd Party 19.99
In Stock.
See what people are saying about this story or others
See Comments in Forum
Previous Next
Pre-Orders
Tomorrow's latest releases