For No Good Reason

Experience 15 years in the life of seminal British artist Ralph Steadman, whose surreal, often confrontational artwork is frequently associated with Gonzo journalist Hunter S. Thompson (Fear and Loathing in Las Vegas). Through Johnny Depp's lead in this intimate portrait, we are able to reach the heart of what make this artist tick, his friendships and fallings out, his love for art and his passion for civil liberties. The inventive, energetic, occasionally harrowing, but inspiring film includes contributions from Terry Gilliam, Richard E. Grant, Tim Robbins and others who offer insight into the man behind the legend.

Ralph Steadman made a name for himself as much by his artwork as for helping to represent and visually showcase what it meant to be Hunter S. Thompson. By defining a man who ostensibly invented his own brand of "gonzo" journalism, Steadman was indelibly linked to the world of Thompson and the image of the safari-hat, the yellow-tinted hunting glasses, and the ever-smoldering cigarette, protruding from the holder clenched between his teeth that perpetuated the legend and legitimized (at least from a commercial point of view) a style of storytelling within the realm of journalism.

But whereas Thompson was defined by his antics that placed him inside the story he was covering and, ultimately, his words, Steadman was defined by the strange, angry, warped images that came from the bristles of his brush or the tip of his pen. He was, in many ways, playing second fiddle to a much bigger act, or like an accessory to an otherwise complete wardrobe. And yet, what becomes clear in the profile of the artist that is 'For No Good Reason,' Ralph Steadman doesn't necessarily see it that way.

Director Charlie Paul hasn't necessarily made a documentary with his look into the life and career of Ralph Steadman; so much as he's made a profile of him. The film is akin to what you might see on a magazine-style news program like '60 Minutes' or 'CBS Sunday Morning.' In fact, it's a lot like the kind of easy-going, somewhat languorous discussion one might find tucked away on a Criterion release that features an episode or an excerpt from 'Cinéastes de notre temps.' It is a discussion of one man's career by that man, more so than it is a comprehensive look at the impact his art has had on the world since making his first big splash in the pages of 'Fear and Loathing in Las Vegas.' 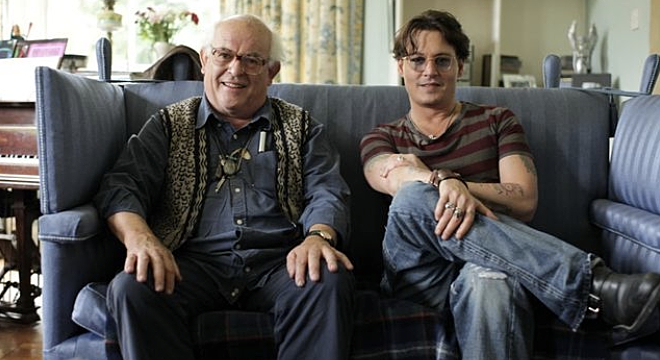 That's not to say 'For No Good Reason' lacks the kind of value a documentary might otherwise have earned through the sake of fitting so easily into a genre. For what it is, the film delivers a fine glimpse into Steadman's career that is aided by the company of Johnny Depp. Depp's presence is sometimes necessary, as it seems he gives Steadman a voice to play off of, and Paul certainly seems interested in framing certain scenes by having his camera act as a fly on the wall, watching two friends discuss the incomprehensible intricacies that is the process of making art. The trouble is, as much as Paul wants to sell that notion, the way the two men interact most of the time, it feels like they're, at best, acquaintances held together by the memory of Thompson.

Then there's the issue when Depp's star power just gets in the way, and you begin to wonder what is it about Steadman that he doesn't deserve a film that's just about Ralph Steadman? Instead, he spends his career working to move out from under the shadow of Hunter S. Thompson, to having a film that is ostensibly about his work – especially his work before and after his collaboration with the late journalist – wind up being hosted by the actor who once portrayed Thompson in a movie about (a drug-addled, fictionalized account of a moment of) his life.

Still, beyond the question of focus, the film offers a chance to watch Steadman at work in his studio and the result is a beguiling and oftentimes quite remarkable. Watching as he flings ink onto whatever kind of paper he uses, and then, after a moment or two of staring at the amorphous blobs of black or red ink, begins to craft the sort of creation that's adorned everything from beer bottles to posters to books and political cartoons.

Moments like that are when 'No Good Reason' justifies its existence. It's just too bad there aren't more of them.

Instead, the film becomes too preoccupied with Steadman's history with Thompson, and the length to which it delves into the pair's meeting, collaborations, and disagreements begins to feel a little salacious. It also feels as though the topic of the film has once again drifted to telling Thompson's story through the lens of Steadman, rather than Steadman's story through his own lens.

Eventually, the film settles on what it means to have been a successful artist for as long as Steadman has, but it barely touches on his passion for civil liberties or his own writings. Instead, it's too caught up with the notion of celebrity and fame, bringing in the likes of Terry Gilliam, Tim Robbins, and Richard E. Grant to talk about the artist's impact when showing the audience might have held much more weight.

Although it is slight and at times unnecessarily superficial, 'For No Good Reason' will appeal to those who appreciate Steadman's art. The problem is, it will probably appeal to fans of Hunter S. Thompson even more. 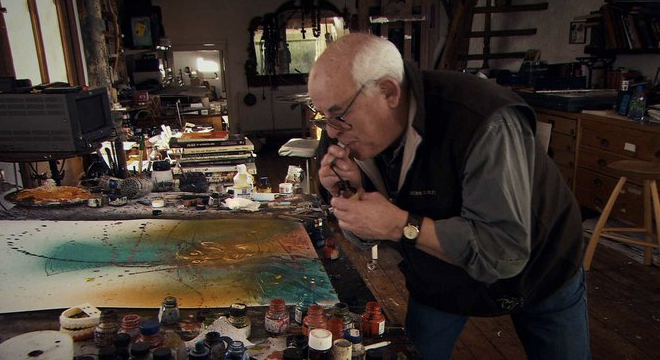 'For No Good Reason' comes from Sony Pictures Home Entertainment as a 50GB Blu-ray + DVD combo. The disc contains numerous previews ahead of the top menu, but it also has a surprising amount of extras as well.

The 1080p AVC/MPEG-4 encoded transfer delivers a crisp picture from start to finish. The film is high on fine detail, delivering plenty of fine facial features, hair, and clothing texture. Although much of the movie takes place inside Steadman's studio, there's plenty to see and to look at, and Paul's deep focus does a nice job of highlighting it. The clean edges of the image also work to make sure the film's subjects, as well as Steadman's artwork, is as pristine as possible.

Color and contrast both look great. In addition to the shots of Steadman at work or collections of his art, there are several animated sequences done in the artists' style that are as bright and vivid as anything he paints. Contrast produces strong, inky (no pun intended) blacks that look great and are free from any kind of banding or crush. White balance is terrific as well, giving certain shots, like Steadman's snow-covered studio a pristine, but not overblown look that is quite nice.

Although it is not terribly dynamic, and outside of a few instances of soft focus, there is very little wrong with this transfer.

The DTS-HD Master Audio 5.1 mix handles the various elements of the film quite well. It presents the dialogue cleanly and clearly, and it balances them against the occasional sound effect or musical arrangement nicely. There isn't much else to the film, as the conversations between Steadman and Depp are typically short. Otherwise, it's just Steadman talking.

As with the image, there are a few animated sequences that offer up something more to listen to, and these moments deliver more of an immersive experience. The rear channels often pick up tiny, ambient noises, while the front channels handle more boisterous elements and even deliver a shot of LFE from time to time.

Overall, this is a basic but good sound mix that handles what it needs to well.

Although 'For No Good Reason' winds up leaving the viewer wanting more from Steadman (and his perspective) perhaps that's a good thing. It maintains an air about the artist that is somewhat unknowable. Still, one can't help but wonder what a lessened focus on Hunter S. Thompson might have forced the filmmaker to reveal about his subject, instead of making another person the topic by proxy. With great image, good sound and a few nice extras, this one is worth a look.

Sale Price 49.98
Buy Now
3rd Party 49.98
Usually ships within 5 to 6 days.
See what people are saying about this story or others
See Comments in Forum
Previous Next
Pre-Orders
Tomorrow's latest releases