Overview - A young woman in Germany has twenty minutes to find and bring 100,000 Deutschmarks to her boyfriend before he robs a supermarket.
OVERALL
Recommended

1998 and 1999 seemed to spark an evolution in cinema, with the looming turn of the century inspiring challenging explorations of humanity, reality, and purpose that haven't been duplicated since. 'American Beauty,' 'The Big Lebowski,' 'Pi' 'Fight Club,' 'Rushmore,' 'The Matrix,' 'Out of Sight,' 'Magnolia,' 'Being John Malkovich' -- I could go on and on, but despite of getting most of the credit, this revolutionary evolution wasn't just an American trend, foreign films had been pushing the same boundaries throughout the '90s, daring to ask the questions Hollywood desperately tried to avoid. German arthouse extraordinaire 'Run Lola Run' emerged from this pack, defying the rules of studio filmmaking.

The film doesn't waste any time -- Lola (Franka Potente) gets a panicked call from her boyfriend Manni (Moritz Bleibtreu), a petty criminal who has accidentally lost 100,000 deutsche marks of a gangster's money on a train. Manni begs Lola to come up with the money in the next 20 minutes before he has to deliver the missing cash to his uncompromising boss. So begins a desperate run to come up with an impossible amount of money in an impossible amount of time. Lola inevitably fails and ends up helping Manni in a supermarket robbery before she is caught, gunned down, and killed.

Don't worry, I didn't just give away the ending -- these first twenty minutes are merely the beginning. In the wake of this tragedy, Lola is suddenly alive and ready to receive the same panicked call from her boyfriend. When she hangs up the phone, she's given another chance to make her twenty minute run and change her fate, but does she remember her first run? Is this an alternate reality? A fold in time? Another life? Thankfully, this isn't a science fiction melodrama, so we're never given the answer. Instead, we're taken on a roller coaster ride through a total of three versions of Lola's run, as split second alterations change the course of her life, as well as the lives of everyone with whom she comes into contact.

Writer/director Tom Tykwer ('The Princess and the Warrior,' 'Perfume') uses a variety of kinetic, visual techniques to thrust Lola into a world that seems to swirl around her in reaction to her every decision. Animation, photographic flashes of the future, and color drenched memories appear at Tykwer's command and whip the film into a frenzy of imaginative imagery, but Tykwer's compelling vision isn't limited by its style, his careful (and sometimes methodical) attention to detail is at play in every scene, deliberately undermining the film's tension to construct a story that says more about the human condition than its hyperactive plot initially suggests. The time-bending setup is just a hook -- his real ambition lies in examining relationships, loyalty, and the ultimate roles individuals play in one another's lives.

Potente's instincts are just as integral to the film's success. She essentially plays three characters, a naïve and easily wounded Lola, an angry and defensive Lola, and eventually, a strong willed and self controlled Lola, moving through each role with a confidence that gives the film its real tension. The music and imagery may be exciting, but her drive and determination is what propels the film from scene to scene. She has an astounding level of control over her emotions and expressions, using each line or reaction to reveal something new about her engaging heroine. Frankly, I didn't care about her lifestyle, her willingness to participate in Manni's crimes, or her behavior under extreme stress -- five minutes into the story, I was rooting for her regardless.

Don't be fooled by the film's post-MTV framework. There's a lot more going on under the hood of this intriguing cinematic masterpiece than some people give it credit for. Admittedly, Tykwer's style will be distracting to some, and others will find the film a bit pretentious, but personally, I've watched this movie time and time again over the years, and I always come away from it with something new. If amazing cinema is defined as an experience that challenges our thinking and forces us to consider our own lives, then 'Run Lola Run' is worthy of every bit of praise. 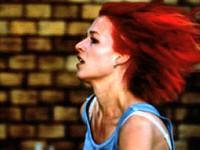 Despite its frantic visual stylings, Sony reinvigorates 'Run Lola Run' with a remarkably reliable and colorful 1080p/AVC MPEG-4 transfer. Lola's hair blazes across the screen with an intensity often lost in modern cinematography. Many of the films I've reviewed are bleached, depressing affairs with muted palettes -- 'Run Lola Run' is packed with vibrant reds, blues, and greens. Contrast is appealing as well, preserving a fair amount of detail in the dark shadows and a comfortable sheen of white in the bright sky. Fine object detail receives the most notable improvement over the aging standard DVD. While the upgrade is evident across the board, look no further than the casino scene to see how much of an impact it has. Note the etching on each chip, the felt on the tables, and the texture of the clock -- compared to the muddy DVD, its near revelatory.

Unfortunately, it's not a perfect experience. Blacks aren't always completely resolved and are randomly tinted with a variety of colors throughout the film. Skintones are usually spot on, but occasionally appear flushed, even when the actors aren't exerting themselves. Finally, there were a handful of instances where grain spiked mid-scene, leaving me wondering if I was witnessing a product of the camera or a mild compression issue on the disc.

Even so, these three minor issues are mere nitpicks in an otherwise impressive catalog presentation. Fans can chuck their old DVDs and finally see 'Run Lola Run' the way it was meant to be seen. 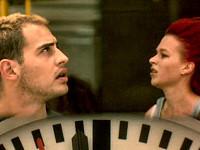 'Run Lola Run' features two Dolby TrueHD 5.1 surround tracks -- an original German language mix and an English dub for anyone who can't stand subtitles. Both tracks are particularly strong, but the German mix is my track of choice since I feel dubbed dialogue always seems disjointed from the soundfield (even when I close my eyes and simply listen).

Preferences aside, each track provides a substantial improvement over the early DVD release. The first thing I noticed was that the dynamics really pop -- low-end LFE support is both healthy and generous, inflating the intense beats of the techno soundtrack with heavy, pulsing thooms. The extreme treble ranged tones in the film also receive the benefits of an uncompressed mix -- the wail of the ambulance's siren is crystal clear, and Lola's high-pitched screams don't encounter the peaking issues they did before. Dialogue is clean and well prioritized, subtle ambiance constantly contributes to the soundscape, and pans are perfectly transparent.

If I take any legitimate issue with the TrueHD tracks, it's that the rear channels aren't used to their potential. There are quite a few times when these speakers are called upon to deepen the soundfield (the snapshot montages, the casino scene, and the staircase run, to name a few), but more often than not, the rear channels are relegated to support work. Considering the fact that 'Run Lola Run' is such a kinetic experience, I expected the new tracks to be more involving.

Still, both the German and English TrueHD tracks provide an excellent upgrade for anyone who already owns the standard DVD. For a foreign catalog film, Sony has once again pulled out the stops and delivered an impressive effort. 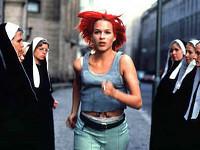 The Blu-ray edition of 'Run Lola Run' includes both of the main supplements from the standard DVD, and tosses in a new featurette for good measure (discussed in the next section). The features serve the film well, despite their limited nature, but they really made me wish there was more to be had. 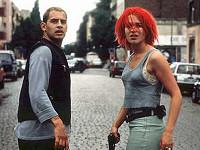 'Run Lola Run' is a stark, challenging film that manages to excel in style and substance. The Blu-ray edition is remarkable in its own right, offering a striking video transfer and a pair of powerful English and German TrueHD audio tracks. It also retains the slim supplements of the original DVD and throws in a new featurette for good measure. In the end, it bests the standard DVD in every way and will certainly please fans looking for a worthy upgrade.

Sale Price 3.87
List Price 6.99
Buy Now
3rd Party 0.01
In Stock.
See what people are saying about this story or others
See Comments in Forum
Previous Next
Pre-Orders
Tomorrow's latest releases