Overview - The last known descendant of Christ is called upon to save the existence of humanity from being negated by two renegade angels trying to exploit a loophole.
OVERALL
Recommended

Cinema has a fascinating ongoing relationship with religion. When congregation-friendly films like 'Amazing Grace' or 'The Passion of the Christ' arrive on the scene, churches are all too anxious to declare filmmakers missionaries of the modern age, but when a controversial film decides to explore the intricacies of any fundamental belief, threatened individuals band together to send letters, organize protests, and jump on Fox News with cases for censorship. It strikes me as an intrinsic overreaction. Instead of breeding dissent and spreading fear, wouldn't it make more sense to engage in well-mannered discussions with those who have watched the film?

Writer/director Kevin Smith ('Clerks,' 'Chasing Amy') was attempting to jump start just such a discussion when he made 'Dogma,' a foul-mouthed comedy aimed squarely at the people burned by religious bureaucracy. 'Dogma' tells the often convoluted tale of an abortion clinic employee named Bethany (Linda Fiorentino) who's enlisted by a heavenly being called Metatron (Alan Rickman) to save the universe. It seems two fallen angels, Loki (Matt Damon) and Bartleby (Ben Affleck), have discovered a loop hole that would allow them to reenter heaven. However, unbeknownst to these homesick renegades, the loop hole would render God (Alanis Morissette) fallible, and bring about the immediate destruction of all existence. With the help of an unlikely crew of misfits, including a forgotten disciple of Jesus (Chris Rock), a pair of bumbling prophets (Jason Mewes and Kevin Smith), a muse (Salma Hayek), and reformist priest (George Carlin), Bethany has to face a demon named Azrael (Jason Lee) and stop Loki and Bartleby from unwittingly destroying Creation.

When Kevin Smith is in his element, 'Dogma' works. Whether his words are spurting from the dim-witted Jay, the embittered Loki and Bartleby, or the seething Azrael, Smith's dialogue is sharp as ever. Like his other side-splitting comedies, each wordy line is packed to the brim with brazen humor, subtle satire, and, most of all, heart. On the surface, each character is as unrelatable as their origins would suggest, yet Smith injects a sense of humanity into each otherworldly being that makes them as empathetic as the humans in the story. Bartleby and Loki are particularly intriguing, rationalizing their mistakes and forging ahead with their dangerous dreams regardless of the consequences. They may be immortal beings, but they're as familiar and flawed as the next guy. Ironically, their disconnect from man comes from their as-yet-unrealized disgust with their own humanity.

The film's cast is equally impressive. To his credit, Smith managed to pull together an eclectic bunch of performers, including the baddie from 'Die Hard,' Earl Hickey, a Grammy winning singer-songwriter, and Jason Bourne himself. Sure, every member of the cast wasn't as famous then as they are now, but Smith knew how to pick them. The actor clicks neatly into their roles and most of them really sink their teeth into their character's convictions. Affleck, Damon, and Lee are on fire, arguably abandoning their own limits and pushing into dark territory that isn't often explored on the screen. Rock, Carlin, and Rickman's characters merely function as expositional guideposts in the story, but the actors work their individual magic and craft a trio of memorable saints that keep the plot driving forward. Even Fiorentino (who notoriously gave Smith quite a few headaches on set) steps up to anchor the film in Bethany's difficult quest. The entire cast handles Smith's densely plotted screenplay with passion and ease -- it's a real treat to watch each of them work.

Unfortunately, the director's script is the very thing that holds 'Dogma' back. To be blunt, Smith tries to accomplish too much in the confines of his two-hour religious satire -- he tries to establish a detailed mythology, educate viewers on a multitude of obscure beliefs, nab at least four laughs a minute, develop a biting examination of religious bureaucracy, graft five separate morality tales onto the plot, introduce a new character every three minutes, and much, much more. It's mentally exhausting to absorb the first time through. On repeat viewings, the pacing drags as the dense origins of each character are painstakingly reintroduced over and over again. By the time Smith tries to inspire viewer conversations on his selection of hot topics, the story has become muddled with libraries of backstory. The usually light-footed writer has a hard time keeping the main plot at the forefront of the film because he's juggling so many other elements.

To be clear, I still believe 'Dogma' is a worthwhile film that taps into the ideas of the mind, the emotions of the heart, and the belly-laughs of the gut. It may not be my favorite View Askew production ('Chasing Amy'), but it still offers fans and newcomers hilarious dialogue and a great cast. Alas, Smith's script is limited by a ridiculous (albeit necessary) avalanche of expositional information that slows the pace of the story and limits its accessibility. I'm usually the first one to defend Smith's wordy dialogue, but in this case I think he bit off more than he could chew. 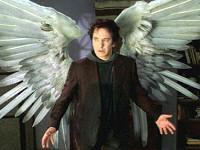 Kevin Smith is the first to admit that he isn't a visual filmmaker; his true talents lie in his pen rather than his camera. Nevertheless, 'Dogma' makes an impressive high-def debut with a sharp and solid 1080p/AVC-encoded transfer that took me by surprise. The film's comicbook palette delivers a series of vivid primaries that leap off the screen -- the multi-colored Mooby's logo, the crimson-clad Buddy Jesus statue, and the bloody wings of the renegade angels look spectacular. Contrast is overblown but stylistically comfortable, black levels are strong, and improved delineation reveals plenty of details that were obscured in the shadows on the Special Edition DVD. Best of all, object detail is immaculate (pardon the pun), boasting well-defined textures and crisp edges. Unlike its previous DVD releases, 'Dogma' even appears to be noise-free -- I didn't catch any unruly artifacts, posterization, or artificial enhancement.

I did encounter a few minor issues, but nothing that threatened my viewing pleasure. As is often the case with catalog titles, certain shots appeared softer than others, flattening the image and robbing it of depth and dimensionality. To my relief, these moments were infrequent and didn't severely detract from the quality of the disc. I also noted a handful of shots in which fleshtones leaned toward pink, leaving faces slightly flushed even when the actors weren't exerting themselves. The only other nitpick I have is that Smith's low budget CG effects stand out in high definition far more than they did on DVD. Still, all things considered, Kevin Smith fans should be incredibly satisfied with the striking upgrade 'Dogma' has received in its move to Blu-ray. I'll even go so far as to say this is the new View Askew video transfer to beat. 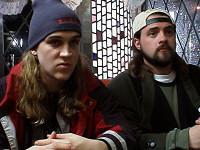 'Dogma' arrives on Blu-ray with a lossless Dolby TrueHD 5.1 surround track (48 kHz/ 16-Bit) that runs circles around the dialogue-driven mixes of Smith's other films. Don't get me wrong, witty banter still dominates the majority of the film, but the track is frequently interrupted by screeching demons, blazing gunfire, and any other fantastical sound effect you can imagine. Dynamics aren't as thunderous as I had hoped for, but the LFE channel still makes a notable effort to win the affections of Golgothan fans everywhere. The high-end whines announcing the arrival of Azrael's hockey demons are stable and ear piercing, the low-end pulses of Bartleby's third act assault rumble across the floor, and the frequent appearance of breaking glass and splintering wood is aggressively represented in the rear channels.

In spite of the explosive chaos, dialogue is crystal clear, nicely prioritized, and naturally distributed across the soundfield. There were a few occasions where I strained to follow whispered conversation points, but I never missed any lines. My lone technical complaint is that ambience doesn't play a consistent role in the mix -- the rear speakers erupt with sound during action sequences, but environmental acoustics are poorly represented during quieter scenes. This is an issue with the sound design to be sure, but one that still limits the impact of the TrueHD track. In the end, the audio package thoroughly trounces the Dolby Digital tracks on both standard DVD releases and definitely warrants praise. 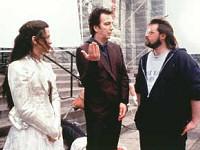 Sony has thankfully filled this dual layer Blu-ray disc with the same hilarious supplemental package that appeared on the Special Edition DVD in 2001. Lengthy and thorough, the only complaint I have is that the infamous "Judge Not" documentary is still MIA. Quick View Askew history lesson: this controversial documentary was scheduled to appear on the original 'Dogma' DVD until then-distributor Disney threatened legal action. It seems the doc didn't portray their marketing decisions and business savvy in a very kind light. While the documentary later appeared on the DVD edition of 'Vulgar,' the completist in me really wanted to see it included here. Ah well. 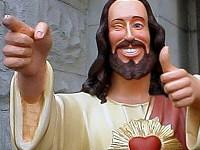 'Dogma' is a hilarious religious satire that tackles more issues than I could possibly list in one review. It's not my favorite Smith flick (it lacks the lasting appeal and intimate value of View Askew productions like 'Chasing Amy' and 'Clerks II'), but it still manages to work on a number of levels. But agree or disagree with my assessment of the film itself, I'm happy to report that you can finally put your aging 'Dogma' DVDs out to pasture. This Blu-ray edition features an impressive video transfer, excellent TrueHD lossless audio, and the vast supplemental package from the Special Edition DVD.

Sale Price 139.97
Buy Now
3rd Party 139.97
In Stock.
See what people are saying about this story or others
See Comments in Forum
Previous Next
Pre-Orders
Tomorrow's latest releases