A band of medieval mercenaries take revenge on a noble lord who decides not to pay them by kidnapping the betrothed of the noble's son. As the plague and warfare cut a swathe of destruction throughout the land, the mercenaries hole up in a castle and await their fate.

In Paul Verhoeven's unfairly misunderstood and lesser known adventure drama 'Flesh+Blood,' Jennifer Jason Leigh stars as the chaste and unworldly maiden Agnes. As the perceptive betrothed teen who quickly learns to do what she must in order to survive, Leigh looks much too young for the challenging demands expected of the character, a little girl recently released from a convent who's given a harsh, brutal lesson of the real world. But the very talented actress, who at the time was actually in her early twenties, delivers a worthwhile performance that captivates our sympathies while also pushing our comfort levels. Soon after being introduced to the innocent gullible girl, we're forced to witness her being raped by the leader of a vulgar band of mercenaries, who forcefully hold her arms and legs. But midway into the appalling scene, the mood changes into something absurdly, disturbingly romantic as the girl begins welcoming the violence and taunts her attacker with passionate advances.

The whole scene is meant to be upsetting and worrying, especially when the leader, Martin (a wonderfully menacing and deadly Rutger Hauer), allows his wayward soldiers to continue violating the poor girl as she watches him with doe-eyed gloom and mourning. As weird as it sounds to say this, it is precisely the point of Verhoeven's film, which he co-wrote with Gerard Soeteman ('Black Book'). It is a dark, ugly depiction of the medieval world we so often romanticize in our modern western culture. Much to our chagrin, this is an era and a place without heroes, where the pursuit of wealth, power and territory is the only true motivator for change, what eventually led to the formation of countries and borders. Even those wearing shiny suits of armor and claiming loyalty to a king are prompted to acts of heroism by the promise of gold, material rewards or swayed under threat as in the case of Hawkwood (Jack Thompson). Meanwhile, men of the cloth, like Cardinal (Ronald Lacey), are steered by the same desires though excuse sinful temptations as guidance from supernatural powers. 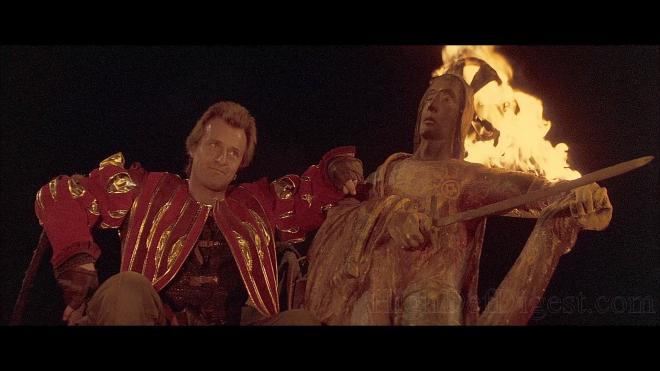 Part of the criticism towards this 1985 production, which didn't do well during its theatrical run but has garnered a healthy cult following, is that it lacks a character worth rooting for, the stereotypical knight in white, shining armor to the rescue. Granted, the plot does feature the idealistic, valiant Prince Steven (Tom Burlinson), an enlightened young lad originally set to marry Agnes riding gallantly to liberate his love from her captors. But interestingly, he's more of a secondary character, meant to create a love interest tension and very little else. Frankly, we're never really championing him. Instead, our attention is on Martin and Agnes and the connection these two make. In this period of moral ambiguity, the women are forced to survive on their own wits, without expecting men to lift a finger though they are shown to depend on them heavily, and they use the one open at their disposal with incredibly efficiency: sexual charm. On a few fascinatingly memorable occasions, Agnes soothes and tames the savage beast Martin with a simple smirk and batting her eyelashes, teaching him without saying a word how to eat like a proper gentleman.

The way to watch and enjoy Paul Verhoeven's 'Flesh+Blood,' in my opinion, is to think of it as an experiment of sorts, one which I believe is impressively effective. Can moviegoers sit through a realistically off-putting and miserable depiction of medieval fiction without the romanticism and fantasy typical of the Hollywood system? Given the film's history, the answer is fairly clear. Having the story set in the year 1501 is not a random choice either. The time, give or take a couple decades, is commonly accepted as the transition from the Late Middle Ages to the Early Modern period, an era of great change and several important cultural advances, including the sciences and medicine. Verhoeven infuses many of these elements into his film, particularly in the invented Steven. This is also the period when gunpowder was being used of explosives, Steven's siege tower is more in the shape of a tank with various elaborate contraptions, and catapulting severed pieces of an infected dog hints at the birth of germ warfare. With all this and lots of sword action, the adventure drama makes for an absorbing watch.

Kino Lorber brings 'Flesh+Blood' to Blu-ray on a Region A locked, BD25 disc inside the standard blue keepcase. At startup, viewers are taken directly to a static main menu with music.

The cult action-adventure film arrives with an impressive 1080p/AVC MPEG-4 encode that's sure to surprise long-time fans and dissenters alike. The film has not been honored with an extensive restoration of the original source, but the elements used appear to have aged excellently well with only a few white spots and bits of dirt scattered throughout the movie's two-hour runtime.

The 2.35: image also comes with the sort of yellowish tint that only comes with age, but nevertheless, the presentation displays bright, well-balanced contrast levels with clean, crisp whites. The stitching in costumes and the fine lines in the wooden furniture and surrounding foliage are detailed and distinct while individual stones of the castle can be practically counted. Although skin tones tend to be on the weaker side with the cast sometimes looking a tad sickly, facial complexions are revealing and natural, and colors overall are pleasing to the eye and nicely saturated. Blacks could be stronger, but, for the most part, they are accurate while shadow details are plainly visible.

In the audio department, Early Modern warfare impresses slightly, but not by much, making it an equally satisfying complement. Starting with the production's violent siege opening, the DTS-HD Master Audio stereo soundtrack erupts with a hearty low-bass that gives every explosion a pleasing thump and heft. It's nothing miraculously seismic or anything, but it's surprisingly plentiful and reliable.

Much of the same can be said of the mid-range where a great deal of activity comes across cleanly with lots of sharp clarity in the higher frequencies without a hint of distortion. Off-screen atmospherics are convincing and pan across the soundstage with discrete detailing and fluid movement. Dialogue reproduction is also distinct and very well-prioritized in the center.

However, the lossless mix exhibits a great of deal noise, air and hissing in the background. It's not always present, barely audible during quieter, more dialogue-driven moments, but it's quite evident during loud action sequences and tends to be somewhat distracting.

Paul Verhoeven's unfairly misunderstood and lesser known adventure drama 'Flesh+Blood' is an impressively effective experiment of sorts. Starring Rutger Hauer and Jennifer Jason Leigh, it is a dark, ugly depiction of the medieval world we so often romanticize in our modern western culture. The Blu-ray arrives with surprisingly good picture quality and a generally good, pleasing audio presentation. Supplements are disappointingly lackluster, but the overall package should please cult fans.

Sale Price 75
Buy Now
3rd Party 75
In Stock.
See what people are saying about this story or others
See Comments in Forum
Previous Next
Pre-Orders
Tomorrow's latest releases