A beautiful young concert pianist is torn between her attraction to her arrogant but brilliant maestro and her love for a farm boy she left back home.

One of the more sentimentally romantic films of director Frank Borzage's later career, 'I've Always Loved You' examines notions of love, lust, power, and ambition between its two leads. Philip Dorn stars, as the overbearing maestro Leopold Goronoff and Catherine McLeod, as his young, beautiful and more talented student Myra Hassman, and the film spends most of its time sublimating a desire to see their feelings fulfilled, by having the characters themselves sublimate their on-screen sexual desire through a shared love of performing music. That layering of repressed emotion creates a lingering tension that eventually bubbles to the surface in the form of two subtextually expressive performances of Rachmaninoff's Second Piano Concerto.

Dorn is fantastic in his role. He brings a beguiling charm to Leopold's egomaniacal womanizing and self-aggrandizement by having it border on obliviousness or, considering his heavy accent, a lack of cultural awareness. Although he is worldly, Borzage and Dorn present Leopold almost like a sheltered tourist who is eager to participate in every little experience he can. But instead of being woefully unaware the awkwardness of his presence, Leopold simply doesn’t care whether others want him there or not.  Early in the film, when Leopold is visiting his old friend and mentor Frederick Hassman (Felix Bressart), to hear his daughter play, he first invites himself to dinner and then abruptly cancels his European tour so that he can spend a day, a week, or maybe even a month with the Hassmans on their farm, much to the chagrin of laconic, traditional farmhand George Sampter (William Carter).

Leopold's ostentatious nature is the film's beating heart during the early going. Dorn's performance borders on the bizarre, and the longer Leopold's antics are given screen time, the more fantastic they become. It's a credit to Dorn that, although Leopold dominates much of the first half of the film, his characterization of a man so wealthy and famous that he utterly lacks any concept of self-awareness, never becomes stale or unwelcome. And while it borders on caricature at times, Dorn is able to keep Leopold from becoming a joke to the audience, even though his depiction of masculine pride is obviously meant to be poking fun at the frailty of the male ego. Still, Dorn manages to stay just far enough outside the confines of normalcy that Leopold's haughtiness stays fresh throughout the film's 117-minute runtime. 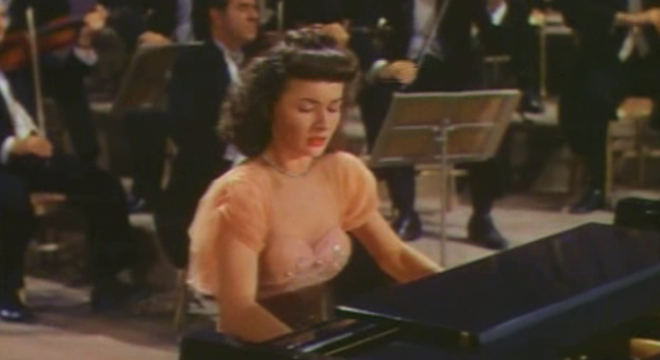 Dorn is at his best after a humiliating performance at Carnegie Hall, wherein the prodigious talent of his protégé upstages the maestro in the most public way possible. Borzage lays the scene out brilliantly, highlighting the intimacy between the conducting Leopold and Myra as she sits at the piano, all while undercutting that relationship by focusing on the reaction of the audience. The moment is intended to be the release of all the tension that's existed between them – despite their lengthy student/teacher relationship – and, for Leopold anyway, it goes horribly awry. The ensuing fallout between them is tantamount to a lover's spat, in which the performance of the male is called into question, and, barring any excuse other than "This has never happened before, I swear," Leopold tosses accusations at Myra, effectively ending their professional relationship and their torrid, if unfulfilled love affair.

At that point, the film abruptly shifts away from Dorn, and in doing so demonstrates how 'I've Always Loved You' was Myra's story from the beginning. But the shift is laden with the melancholy of her discontentment, as she returns to her father's farm to wed George, assuring him time and again he is the one she truly loves. McLeod's performance is much more subdued than Dorn's and as such, while the narrative slows a bit – despite the great leaps forward in time – the tension in McLeod's face underlines the emotional dissatisfaction she has held onto, as her sublimated desires for Leopold, have now shifted to a sublimated desire to fulfill her ambitions as a pianist.

While Borzage works to keep the story going at an interesting clip, jumping forward to the birth of Myra and George's daughter, and eventually her adolescence into young adulthood, the film is occasionally mired in its soupiness and its melodrama. Myra's shift from young, ambitious concert pianist to dowdy housewife says a great deal about the expected role of women during the era, and it seems clear the film is making a comment on that by suggesting the pull of motherhood isn't necessarily as strong for all women as many men – especially of the time – believe. Borzage illustrates this by the somewhat distant manner Myra and her daughter Georgette (Vanessa Brown) converse, versus the loving, familiar interplay between George and his daughter – whose name is a clear indication of the relationship she has with her parents.

These moments are effective, especially the chilly response Georgette gets from her mother when she announces she's been invited to play Rachmaninoff at Carnegie Hall. Unlike Leopold, however, Myra's apprehension is based on the realization her daughter may not be good enough – and perhaps never will – rather than any fear of being overshadowed by a supposed upstart. It is an off-putting, but ultimately tender moment that illustrates Myra's true place is not in motherhood, but one she already left behind.

As the film weaves its way to the inevitable climax at Carnegie Hall, the screenplay by Borden Chase gives way to convention somewhat, but still manages to exude a potent feeling of rampant desire between the two leads. If nothing else, 'I've Always Loved You' works as an interesting psychological exploration of human action and desire put aside for the sake of masculine pride and the sacrifice that so often exemplifies the concept of true romance. 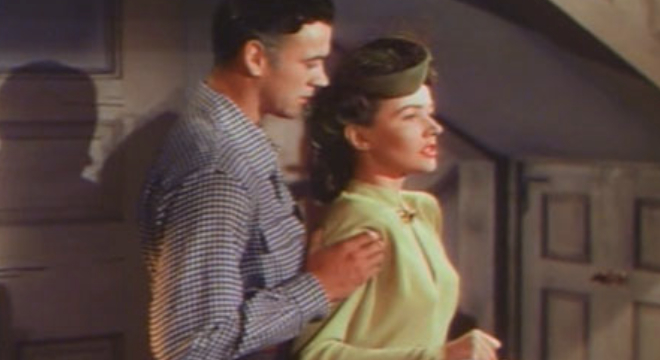 'I've Always Loved You' comes from Olive Films as a single 25GB Blu-ray disc in the standard keepcase. There are no previews or special features on the disc.

Presented with a 1080p AVC/MPEG-4 encoded transfer, 'I've Always Loved You' offers a nice looking image, considering the film's age, that is by no means spectacular, though. Heavy grain is persistent throughout the film, as are various artifacts, white spots, and scratches. None of them are terrible in and of themselves, but they can sometimes be a distraction. Mostly, it is the grain that presents a problem, as it often keeps the fine detail that is sometimes detectable in close up from being present elsewhere.

As such, fine detail is rather low. While the image is detailed in and of itself, there are only rare glimpses of fine facial features or hints of texture sprinkled throughout. Most of the backgrounds are backdrops, but certain moments like Myra and George by a pond on her father's farm look nice, as the sun reflects beautifully off the placid water. Both concert sequences are also filled with a nice amount of detail that maintains the presence of a full orchestra and theater quite well.

Contrast is not as high as it could be. Black levels though strong at times can also appear grey and cloudy in others. White balance feels off during exterior sequences, resulting in blown out highlights and a hazy image. The same goes for color, as it tends toward the more pastel-y end of the spectrum – no doubt a result of the Technicolor process – and that generally keeps most of the colors from looking as solid and vibrant as the otherwise could be.

The DTS-HD Master Audio 1.0 mix delivers audio with general clarity that focuses primarily on the dialogue, but still manages to deliver two nice sounding Rachmaninoff performances to listen to as well. Dialogue is easily understood and is delivered cleanly. Although it can be tinny at times that issue never results in distortion to the point of total distraction. There's not much atmospheric noise to speak of, but sound effects generally resonate with clarity and accuracy. The film's score is subtle throughout – at least until it is the focal point of the narrative – which gives the mix a nice sense of balance, slightly favoring dialogue over score, but not to a fault.

This is a basic audio mix that, some issues aside, is surprisingly free of scratches, clicks, or any other sort of problem that might arise due to the film's age.

'I've Always Loved You' does not contain any special features.

'I've Always Loved You' goes all in on the sentimental romance aspect, but never becomes cloying or adversely emotional. The notion of repression in both the lead characters works well, considering some of what the film is saying about gender and ambition in the mid-'40s. Both Dorn and McLeod give terrific performances at opposite ends of the spectrum, which works out to the film's benefit. Although the image and the sound are not as good as they could be, the movie itself is rather interesting and entertaining – especially for classic music enthusiasts. Worth a look.

Sale Price 13.95
Buy Now
3rd Party 13.45
In Stock.
See what people are saying about this story or others
See Comments in Forum
Previous Next
Pre-Orders
Tomorrow's latest releases